Kafka on the Shore by Haruki Murakami

I have always loved Murakami and it was definitely hard to pick one. In the end after mulling for a while, I've decided on Kafka on the Shore because of its craziness and a whole lot of other-worldly symbolisms and I'm not surprised to find others who've picked the same book.

The book has two parallel stories that converge in the same location, much like his newer book 1Q84. Two main characters are Kafka, a fifteen year-old boy and Nakata, an old man who has the ability to talk to cats. Unlike what may seem to be science fiction or a fantasy novel, the book sits somewhere between surrealism/mysticism, with a good mingling of Japanese spiritual innuendos, and simple ordinary living (Nakata talking to the cats about eating eel/unagi and the many music references — Radiohead, Schubert, Prince, Bob Dylan, Otis Redding and more).

Without giving too much away, here are some points that I picked up from reading Kafka on the Shore for the second time:

Nov 11
Some early sketches of the M that I was leaning towards. 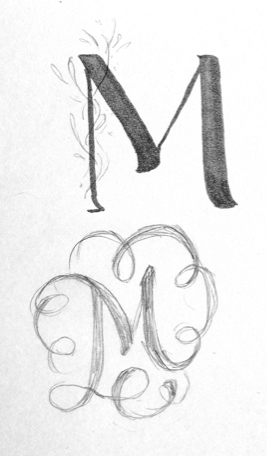 I decided with something solid, less curly as the character speaks with a strong male voice.

Nov 13
Some ideas about the way the M should appear. 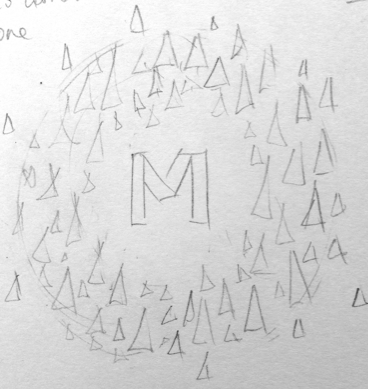 M in the middle of a forest clearing. 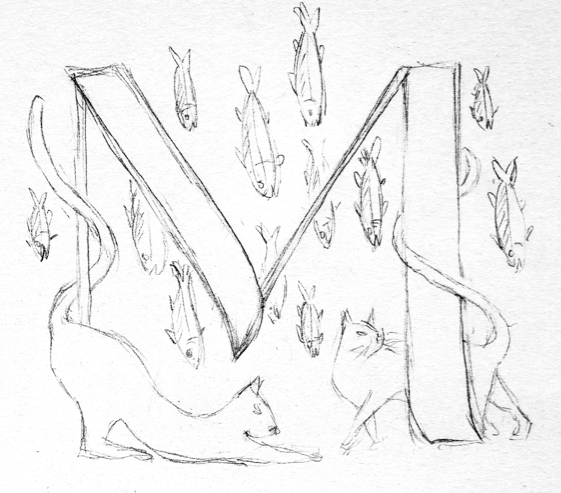 Using the M that I was satisfied with, I added in elements of the cats and raining fish. 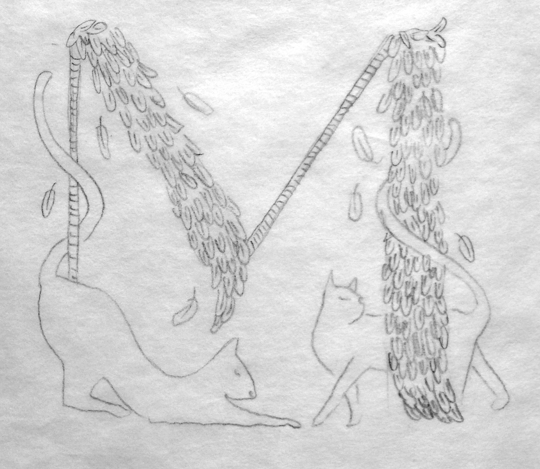 Traced the same M minus the raining fish. I reckon the feathers ought to be larger with some lying on the ground. And I'm at a toss between keeping the crow's feet and making it entirely of black feathers. Will have to try it when it's digitised. 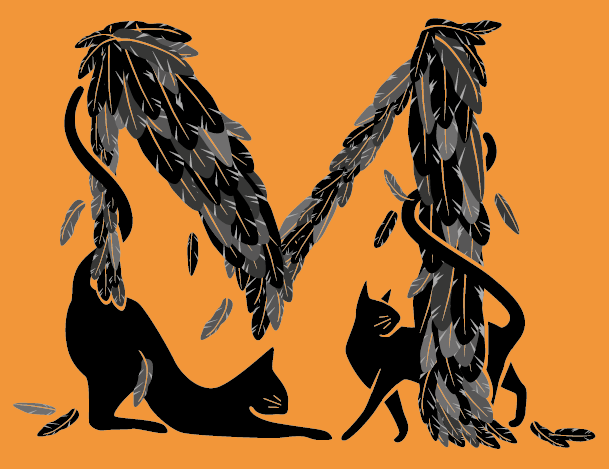 Not too happy with this — feels too busy. Back to the drawing board. 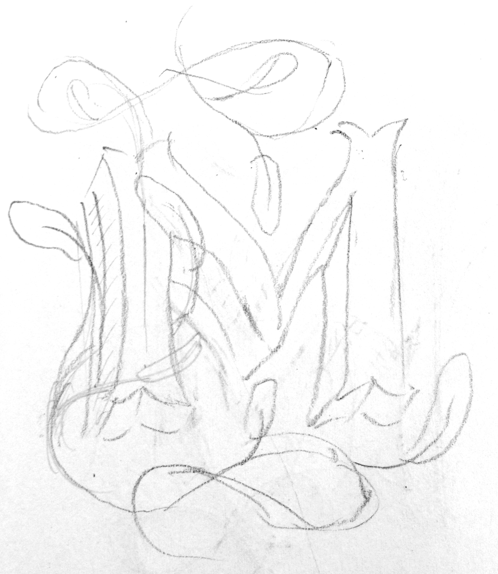 Playing with solid shape with shadow and lines. 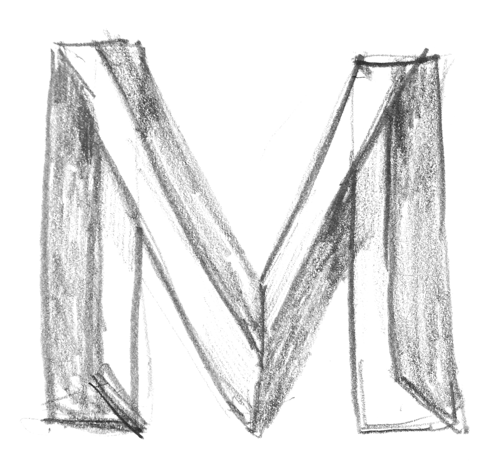 A geometric M. Hope to add flourishes of feathers. 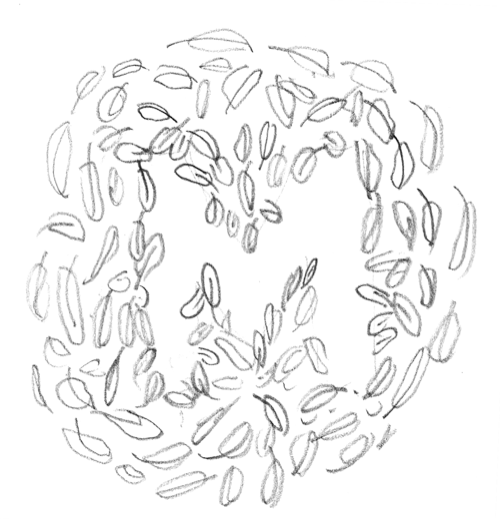 Feathers making up the negative space. 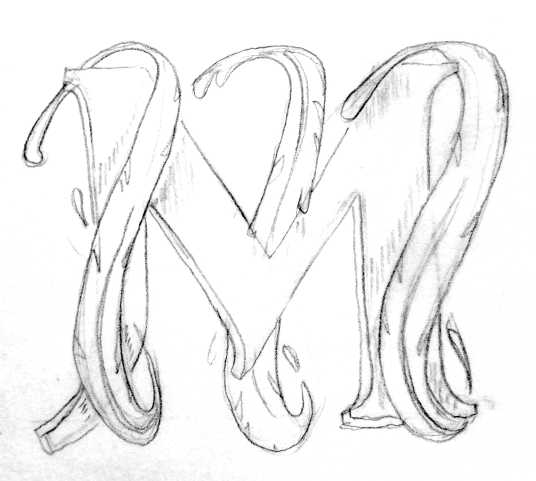 Another M, with 3 feathers around a serif M. Feels too decorative and hardly concise to the element of the book.

I think of all the newer sketches, I'm more inclined to the last one with the use of the negative space with crow feathers. Picking a cat would be easy but crows have a strong mythological symbolism in Japanese culture (as messengers from gods) and also a strong voice in the book.

It will be much "simpler" and it will take a lot more effort to restrain myself from adding elements. And having had discussions with friends, this seems like the strongest piece tying in to the story and feel of Kafka on the Shore (and the main character's alter ego, the Boy Named Crow). I also like how it's the negative space as it represents the parallel universe/time/space that's suggested in the book. And the sort-of-there-but-not-quite M.

Nov 21
I've created a simple sans serif M (for some reason, a serif M doesn't feel very Murakami — his writing is modern, simple, bringing the ordinary to life and hardly fluffy) and turned it into guides for me to build up the negative space and here's my final piece. Creating and moving feathers around is a lot of work! Hardly simple in execution, but I was striving for it to appear simple.

Personally, I think it'll be fun to see this as an embossed cloth bound book cover. 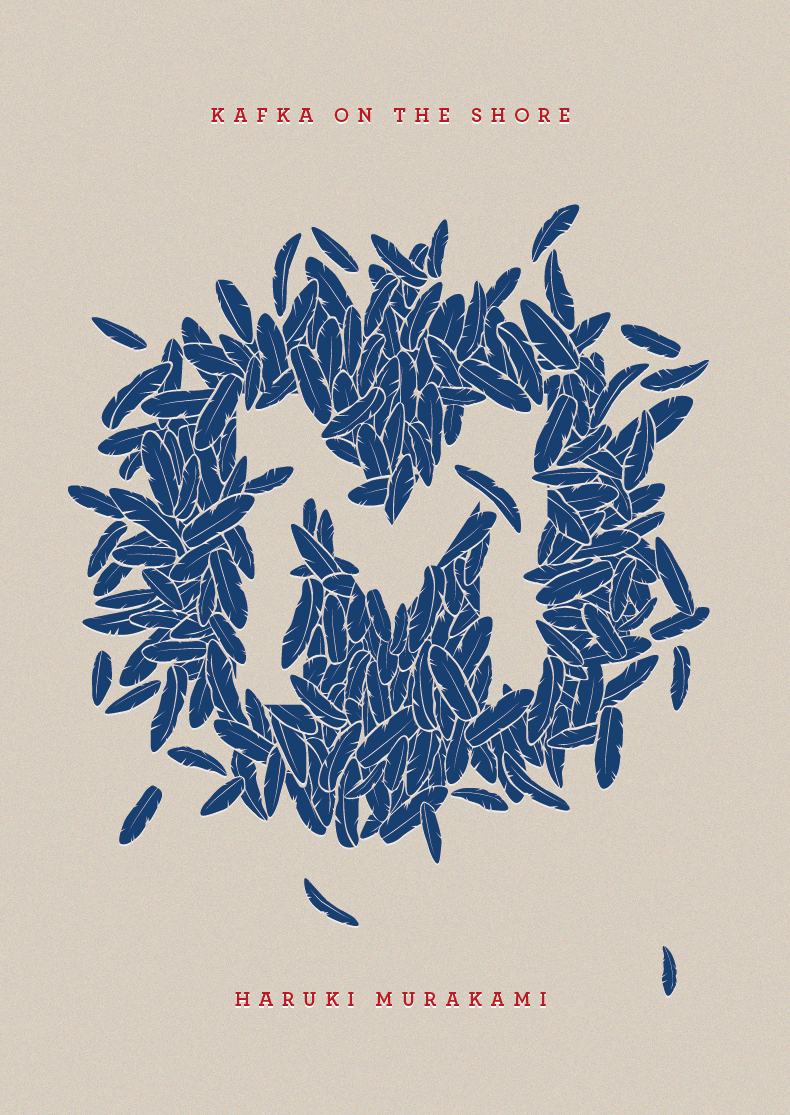 Dec 3
So I've made some minor edits to to feathers — I'm not sure if anyone else will notice, but I think I'm happier now. Below are the final M design and cover (with texture, just for fun). 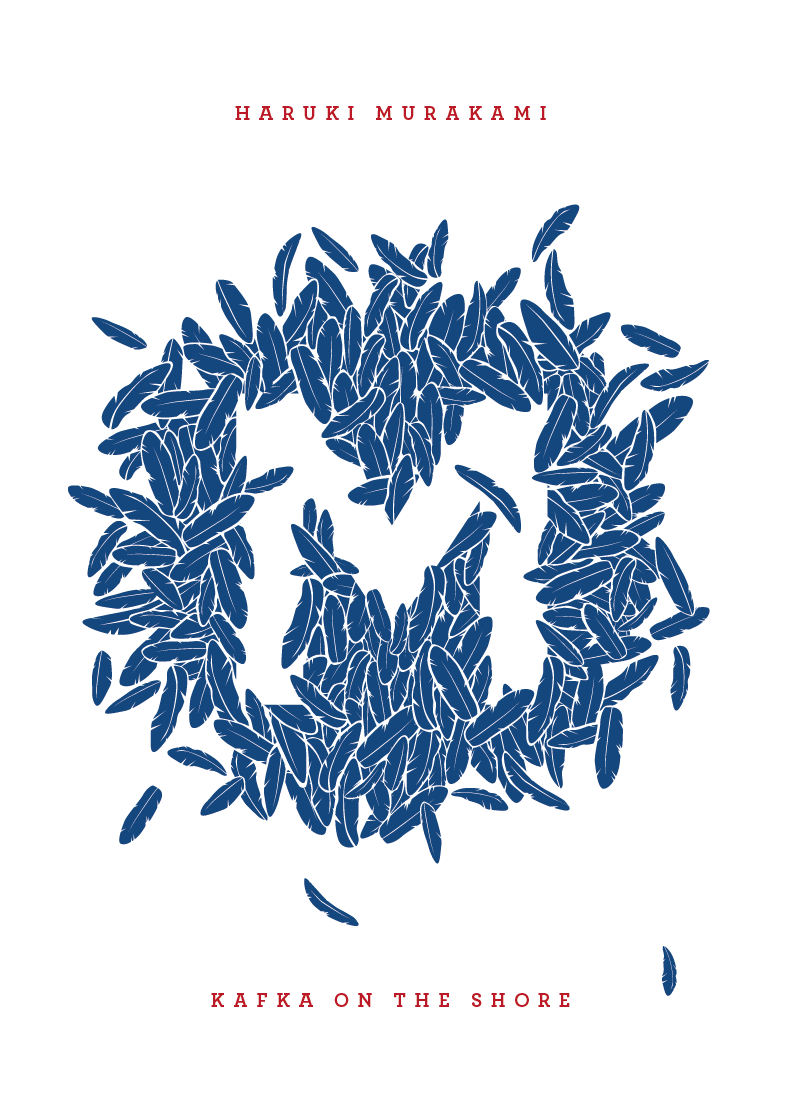 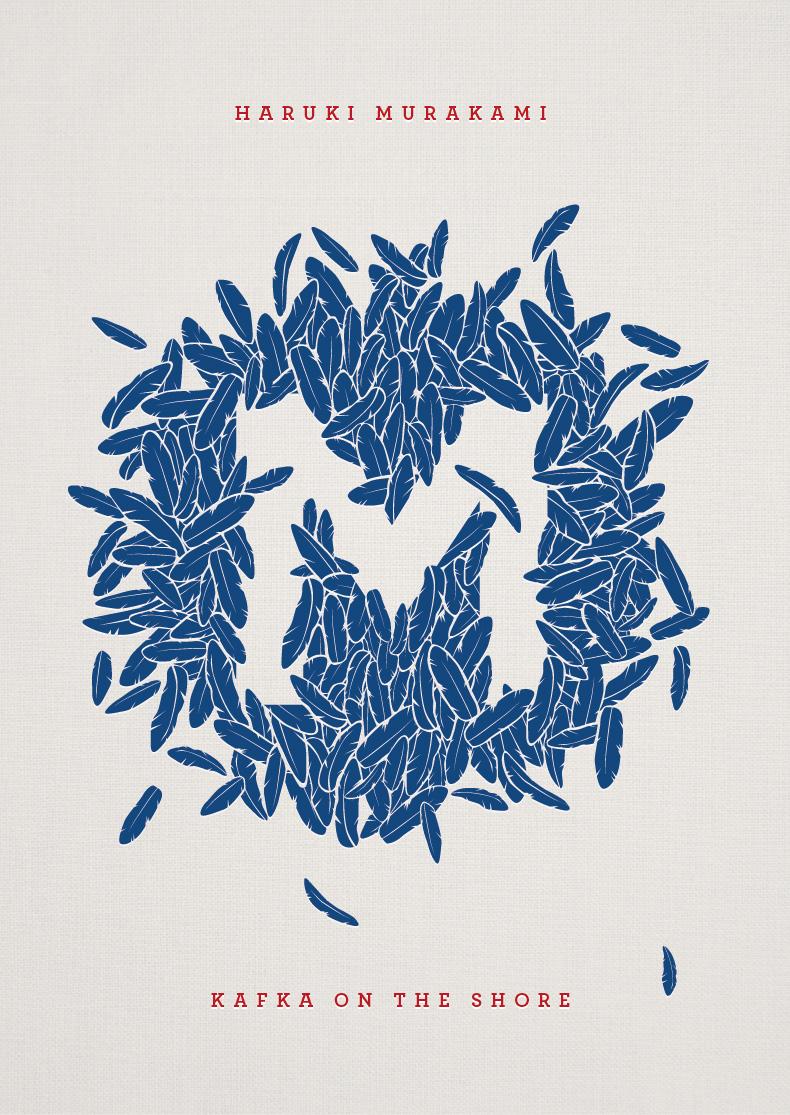 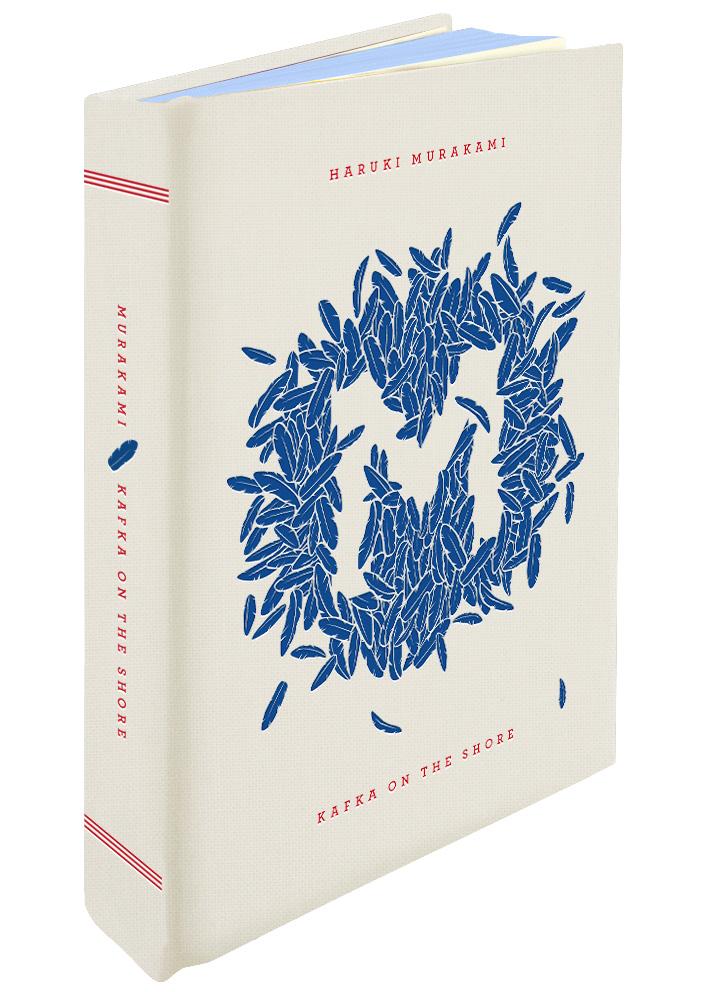