I've never yet given collage an honest go, but I've been admiring Susan's incredible collages for ages. This class is the perfect way to jump in, and Susan was so lovely in her videos! I already had all the supplies on hand, so I set to work!

Well, if painting these messy papers isn't the best outlet when you are in a bit of a creative funk, I don't know what is. I had the idea to paint pumpkins for the fall since I can't follow directions, and I thought the textures would be tonnes of fun. I only had fancy pants acrylic paints that I no longer really use, so I used those rather than buying something new. I painted a bunch of sheets of reds oranges and yellows, as well as browns and blacks which I thought I could use for shadows and shading. By far I had the most fun painting browns. Mixing them right on the page was a blast.

I had the idea to do a stack of pumpkins, and as I was working I thought it would be even jollier to turn the stack into a little man with a jack-o-lantern face. I used a combination of the paper and pencil crayons because I'm always a big fan of pencil crayons. I'm pretty pleased with it considering it was my very first attempt at college. I especially love that second pumpkin from the bottom, with its dreamy texture. I sed a scrap piece of card stock which is why this is a funny long shape, but I rather like it.

Since I was having so much fun, and I had another piece of scrap cardstock, I also tried out a little dandelion. I had such a fun time choosing the areas to cut and cutting out those precious dandelion leaves. I had a great time playing with texture for the dandelion head. I used a combination of paint markers (Molotov and Posca) as well as pencil crayons. 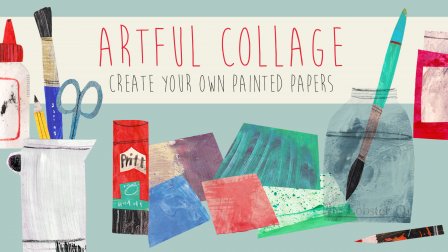