I've taken several of April's classes in-person before and no matter how much I already know about cocktails, I always learn something more from her, so I was excited to find this class on Skillshare. I post the drinks I make on Instagram pretty regularly, so feel free to follow me at @fernandshaker if you're interested in other drinks I've made.

One of my favorite cocktails is the Bramble. It's typically made with Gin as the base spirit, with lemon juice, simple syrup and Creme de Mure (a blackberry liqueur). I decided to swap out the Gin for some Bourbon and used Meyer Lemons for the citrus component. I also added some Thyme for a little fresh herbal quality, and the Creme de Mure I made myself late last summer at the end of blackberry season.

The cocktail turned out really good, but it might be a little too sweet if you weren't using crushed ice, since you won't get the same kind of dilution, so others should be aware of that if you try to recreate this at home.

*Side note, none of these photos have been retouched or edited and were shot on my iPhone 6s

Muddle 4 berries and a small sprig of thyme in a shaker. Add whiskey, lemon juice and simple syrup and shake with ice. Strain into a double rocks glass filled with cracked ice (I double strained mine because I hate weird bits that clog up my straw when I'm drinking, but you don't have to). Top with more crushed ice and float the creme de mure on top. Garnish with a sprig of thyme and a couple blackberries. 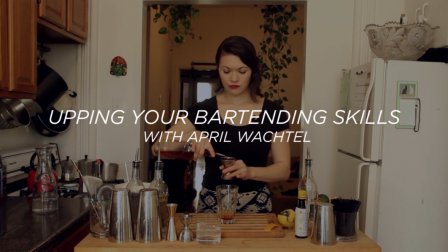 Intro to Mixology: Up your cocktail game in 30 minutes!
April Wachtel