Working on my mistakes

These two pictures were taken in 2013. Actually at that time I was into photography for a year or so and was learning a lot. And most of the time the light was ok. So I'm not quite sure what happened here =) The pictures are very blue and I only can assume that it was late into the evening and light from the window was very cool.

These two images bellow were taken a few weeks ago (2016). Same place (dining room). But this time I was shooting during daytime, when there was plenty of natural light from window. In both cases I used reflector to make shadows lighter and used window shades to diffuse some of the light.

Here is another example (and ok, I know it looks bad=D but since I'm here to teach, you have to see where I started =D). Also made in 2013. Don't mind the blueish colour of pancakes, they were with blueberry. There is quite a lot of mistakes in this picture (light, composition), but I want to talk about decorating the set up.

So this is a set of images I took a few days ago (2016) and how I improved it through decorating.

The first image, I was just looking if the light was good, so I did not put any kind of decoration on pancakes. The second one, I put some berries on top and the composition became more interesting. But on the third image I wanted to make that yummy look, so, with a help from my mum, who kindly agreed to pour some maple syrup, a third image was made. 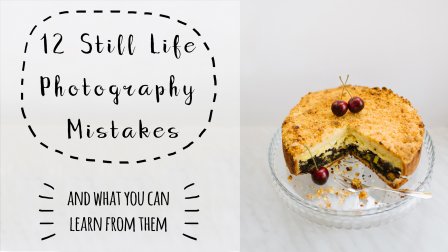