Update 5/24: It is finished! It took some time, but my vest has finally been completed. I ended up resolving my problem with the long facing piece by just cutting the excess out of the middle behind the collar, then stitching the two halves back together. I wanted to try a more subtle approach, but since one edge was already finished, it was hard to think of a better way to go about it. As for attaching the facing to the vest, here is how I went about it:

1. First, I pinned the "right" side of the facing to the "wrong" side of the vest. I stitched it to the vest using a 1/4" seam along the inside edge where both fabrics meet.

3. I then used a 1/4" seam to secure the outside edge of the facing to the vest. Viola! Facing attached.

I'm pretty satisfied with the end result, but I'm sure my next project will be better. As it turns out, costume fabric doesn't iron very well (the fabric stretches and distorts the shape of the piece), so the seams of my garment and the way the pieces fit together weren't exemplary. However, this was a class to learn new methods of garment construction, and considering all of the new stitches we were shown and different finishing methods, I would say that this class was a complete success. Thank you Josh for sharing your wisdom with us!

Update 3/31: My project is coming along fairly well. Not quite as fast as I had hoped, but things are definitely taking shape. The stitches that Josh has shown us are really neat. I've never seen any of them before, and it was fun to try to execute them for the first time on a project. I had mixed success, but overall I'm happy with what I've done. It is, after all, a learning experience.

However, it seems as if I've run into a snag. I was getting ready to do the Hong Kong binding part when I realized that in the video, the facing was already on the garment. I thought, no big deal, I'll just stitch the facing onto the vest before I finish the armholes, and we'll be on our merry way, right? Not so fast. It seems I might have done some miscalculating when cutting the fabric for the facing, because there are a couple extra inches (!) around the collar when compared to the vest proper. This is kind of a big problem, since the opposite edge of the facing is finished, and a simple cut-and-mend won't look very pretty. I thought about maybe trying to bunch the facing a bit at a time so that it's not terribly obvious as to the oversight, but I'm not so sure that will pan out as well as I would like. So for now, my project is at a standstill until I can figure out how to get past this roadblock. To the drawing board!

Oops! It seems as if I've forgotten to post some updates on my project. I just got so excited about making a vest that I forgot about everything else! Vacation and illness have stunted my project's progress, but things are starting to take shape. I'm having trouble uploading a photo, so I'll describe my project instead.

I'm using the provided pattern for the class right now to help brush up on my sewing know-how. My last real project in sewing was in middle school, over a decade ago! I chose to use costume fabric as the material, which has a kind of microfiber-ish feel to it. The colors are fairly dark and muted. The main front and back pieces are navy blue, and the pieces above the style lines are red. This is my favorite color comination, and they also just happen to be the colors of my alma mater (Rock Chalk Jayhawk!). I had trouble finding a color that would mesh well with these two for the facing, but I settled on a green that I think works nicely.

I've already assembled the pattern and cut out the fabric pieces (probably my least favorite part), and now I'm ready for my project to start taking shape. I can't wait to see what kind of stitches Josh has to teach us! 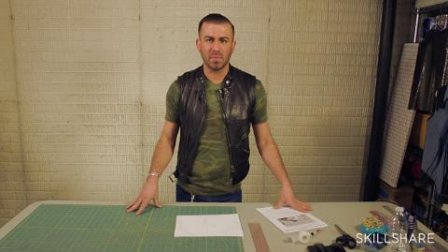 Make Your Own Clothing: Introduction to Garment Construction
Joshua McKinley