Here is my project for this class. It is a portrait of my husband, Gabriel. He is a smart, generous man, with a great sense of humor. As I don't have any studio equipment, I used natural light from the patio door as the only source of lighting. Here, he is wearing one of his favorite hats,. I think it represents him well, especially with its stylized guitar, as it is his main instrument.

In the first image, I have the light behind him, producing a gradient of light on his face. I lightened his eye a little bit in PP and softened the skin mostly on the nose, but other than that, there is very little retouching.

I also took some photos (second image) against the light, so as to get only a silhouette. I added a hint of the color with Photoshop, in the upper part of the image. I did this because in that part of the photo, the glare was so intense as to suggest that I had cut out the shape and posted it on a blank background. I felt it added a little interest to that part of the photo. 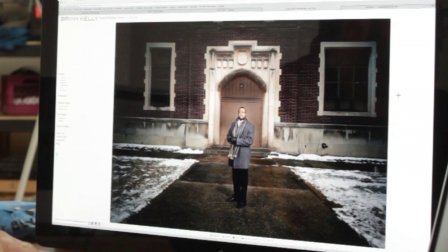