Tambourine is a song I wrote a while back and recorded here in my home studio under my stage name 'Tim Timmi', after having learned a few things from the course.

I really love the idea that you can create a big sound from a simple set up. My challenge with Tambourine was trying to create this big, full, rich sound out of a fairly small room.

As my studio is actually a studio, my bed is right next to where I record so that soaks up alot of sound reflection. Monitors were angled inwards and away from any corners so as not to amplify any low frequencies.

Production and recording was done in Ableton Live 9.5 on a MacBook Pro (for sequencing / arrangement) and iMac (for production / virtual instruments etc) with I think 17 tracks.

For recording vocals I used a Shure SM-58 running through an Apogee One. Luckily there was very little noise from the microphone so I was able to use Ableton's Looper device to record parts over and over again in layers and that's how I got the 'gang vocal' or big group sound, panned one left about halfway and the same to the right.

There are a few vocals in the track which were recorded with my other mic which is a Samson G-Track USB mic / interface. Great mic, but was a little too 'bright' for the sound I wanted for this track.

When recording the gang vocals I had the mic inside the sound protector on the mic stand, but sometimes I felt I got better takes by holding the mic directly, so I had to be extra careful about plosives etc.

Picked up a really useful tip from the course about putting a shock absorber underneath the mic stand, maybe its just me but I felt the takes were less muddy on the whole, I live in an apartment complex that sways like a tuning fork so maybe all this time I was picking up low-end and hadn't even realized it!

Mixing was quite tough because there were alot of elements in the mix. I recently have started panning everything to my left speaker so I get a mono output. Then usually if it sounds okay on the one speaker and you can hear everything, then in stereo it sounds much better.

I wanted everything to sound warm and rich but there are alot of strings plus piano plus the vocals. I considered using tape saturation, but was worried the harmonics would muddy the sound a bit. I was looking for something between crisp and lo-fi, but not sounding too 'digitally' bright.

I rolled off some of the top end of the mix in Ozone, and warmed up the mids in the piano as this was the key instrument that I wanted to cut through. Then, as there isn't a bassline per se in this track, I wanted the stomps to sound punchy but not boomy or subby.

I was mixing alternately between AKG K-702s and on a pair of M-Audio entry-level monitors, though I prefer mixing on the headphones! My walls are thin, I work best very late at night and didn't want (too many) complaints... !

For MIDI I used a Korg NanoKONTROL as a simple mixing controller and panning etc, and played an M-Audio Keystation as keyboard.

Had a blast on the course, learnt alot, improved alot and looking forward to more.

If you enjoyed the track I have more stuff on the links below, feel free to listen or drop me a line ! 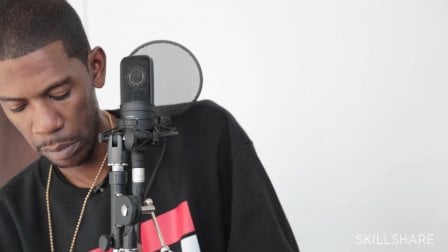