This bike came into a shop I was working at at the time and the kid wanted to order some parts as it was basically a rolling chassis. I started chatting with him as there is a special place in my heart for old steel. Turns out he wasn't crazy about the bike and actually wanted to fix it up so he could sell it to get the bike he wanted. Probably a little against my stores policy, I stopped him from ordering parts for a bike he didn't want and offered to buy the bike as it and contribute to his dream bike fund.

A few ebay orders, parts bin dives, and couple days later, the Peugeot was a functional period correct bike. So I decided to honor it with an illustration.

I started with the frame

and moved on to the wheels (which reminded me of lacing my first set of wheels,)

I then put all the pieces together

and finished if off with black to white gradients with a grain effect for shadows and some dimension which I separated for this shot just to show where I put them.

I'm happy with the way it turned out. 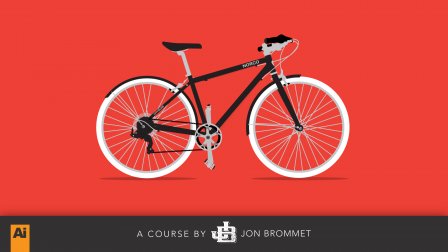 Draw Your Bike! Getting Started with Vector Illustration
Jon Brommet