Alright, started on this baby!

I've always been a bit of a Blizzard fanboy - not as much as of late, but it's basically defined early gaming years. Diablo had such a friggin' fantastic thematic vibe, warcraft was incredible, played a lot of wow as well. So I wanted to do something with that. I don't like the olde' alien vibe some later wow shit gives off, nor do I like elvish 'pretty' craftmanship. One of the weapons I always thought was coolest was Diablo II's Schaefer's Hammer. Just the idea of hitting someone on the head with a blunt heavy hammer, the damage you could deal to someones head, impressed me somehow. Lot more than swords. So I wanted something like that.

Inspiration-y stuff. It's got the sword in there cause me and a friend were always waiting for it to drop and it never did. Came up with asomewhat of a sketch, not sure if I'm happy with it but I decided to go to illustrator at this point.

Aaand this is what I have so far! Fairly happy with the handle, we'll see where we take the actual mallet.

Well I don´t have a lot of in between steps but I'm sortof done. Not sure what it is at this point, may go back to the blade and make it a bit more tomahawk-like. Or hammerlike. We'll see! Had a blast, learned a lot and I think it looks great! :) 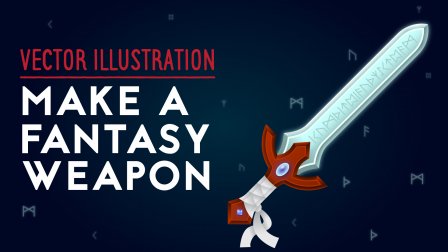