Vienna Secessionists? Oh man, if I ever had an art history crush, it would be this group.

The Secessionists were part of the Art Nouveau movement. Art Nouveau was less a style as it was a way of thinking about art—practitioners were looking for a "new art" that reflected the social changes happening at the turn of the 20th century. Artists were encouraged to look to nature for their inspiration, and that led dynamic lines, figures that seem to meld together or morph into other objects. The really cool thing is that wherever Art Nouveau took root it also took on a unique sense of style. Gustav Klimt and a group of fellow artists rebelled against art that was officially approved of by the establishment in favor of the brilliant and emotionally rich work we see now.

Anywho, long story short: Klimt he would have loved the idea of reinterpreting his themes into three dimensional objects. :)

I went onto Pinterest and started collecting images of Kilmt paintings that caught my eye, less for meaning or symbolism, but color and shapes. (Here's a link; it has my inspiration pins from the Kandinsky and Klee workshops too.)

One thing I discovered that never knew was that some of the details on Klimt's paintings were three dimensional:

Detail from the Stoclet Frieze, 1905.

Eyes are a common theme throughout his paintings, along with spirals, triangles, and these cool little abstracted flowers.

So I'm going to use some of the details from the Stoclet Frieze and from Water Serpents as my starting point.

Step two: I started trying to recreate some of the details I picked out in my sketch book. These are a couple of the sketches:

I started with some wooden animal cut-outs I found at my local craft store—a whale, an owl, and a rooster. Oh yeah: Klimt Chicken is going to be a thing,

First step was sanded and gesso all cut-outs, then sanded again once the gesso was dry to knock off some of the grit.

Next I painted a base coat of cobalt blue followed by a coat of Klimt-y gold (that's an official color name, right?). I lightly sanded the surface once everything was dry to let some of the blue show through. No idea why; I think I was on a sanding kick at that point.

I drew in the outlines for my design and started painting.

I'm going to finish the painting and start adding other details.

It took me a little while, but I finally have photos of the finished project. I did an additional animal because I was having a lot of fun. :)

The three-dimensional parts were made with gold puffy paint.

Klimt owl! There is something actually very soothing about doodling so many eyes. 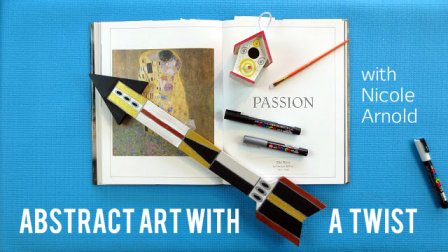 Abstract Art with a Twist: Paint a Craft in the Style of Klimt
Nicole Arnold