I Want Stars On My Feet

It all started when my beloved chucks got a little... smiley

And then there was a Buy One Get One sale on plain canvas shoes... The best choices were a navy pair with white topstitching and a plain white pair. I don't know that I'd do white shoes as a base again, they were a lot of extra work but they did end up being my favourite pair!

So with a friend over to play (he was just painting on a canvas though) and my roommate painting her own pair (while simultaneously packing for her flight leaving later in the evening), I jumped in with the tape. Erin will be posting her project as well I think after her plane lands!

These were my main nebulae references...

The tape wouldn't stick very well but it worked out. I've played around with galaxies using watercolours before and I found that I hated how they looked right up until the stars went on... the shoes were no different!

Will post the results after they're laced up again!

My new shoes on the way to the bus stop...

And the other pair. They're cool... they're just not green and glow-y.

Awesome class, Tab! Thanks for the fun evening ;D 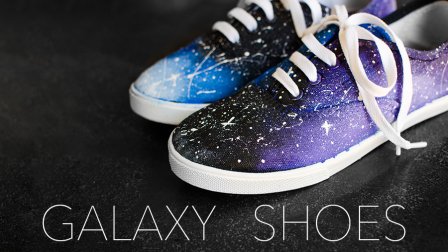