I've only watched the part 1 vid so far but wanted to try that before moving on! Very useful skill to have.

This is the AI image I did to start with (note I made and included some of those hot air balloon trees in the end plus some more deciduous ones!):

Then I transported it over and added some layers behind and some on top, including a black background, a pattern and change of size and colour for it, then a brush pattern layered on top and some splashes. Well, a girl has to have fun, no?? The end result:

Now to see what is in the second video...

Right. I deccided to bring in the coloured daisy pattern from Patterns>Nature>foliage. It all went okay - arbitrarily! ie the pixels seemed to leave a line at one particular enlargement but not at others. Anyway, I did it 4 times and it seems reasonably okay now, so I drew a quick white flower on black in PS and clipped the fill layer to the flower.

I didn't pause to grunge it haha, so onwards and upwards...

I made an arch in AI and took it into PS - the Define custom shape was there first time so I didn't have to duplicate the path in the paths panel. Strange, but fine by me. Then I duplicated the arch to make a nice row and painted them with crosshatching :)

This is getting a bit longwinded as an upload - but it's a good record for me and I'll go watch the final bit!

And for my final effort here: one bluebird in a music moon! Opened the ai file in PS and added a music layer on top, set to a clipping mask on the original circle, set the blend to Divide and then went back to the black of the original layer, selected it (because no music showed through black) and painted in some branch-like bits which revealed more music. Very satisfying - great class, Helen! This will appear as a jpg not a round png as it was too big to upload. 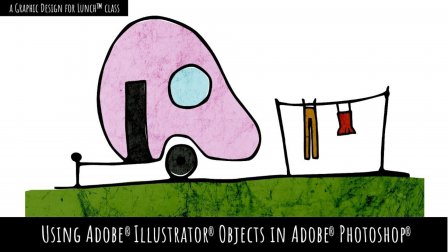