For this project, I utilized the questions provided by the instructor, Ira, to aid me in the creation of an imaginary world and I was pleasantly surprised by how effective these questions were.

To begin, I noted down various aspects of the imaginary world by answering worldbuilding questions.

This imaginary world is set in the past — a fantasy world.

The focal setting of this world is a lone tower, in the midst of a vast ocean, that reaches seemingly endlessly into the heavens and descends likewise into the deep. The ocean is spookily calm and still, reflecting the sky like a mirror. No other land masses are perceivably surrounding the tower. The tower has a ground platform exposed slightly above the surface of the water and atop it are grown fruit-bearing trees, flower gardens and sectioned areas of grass.

The sole inhabitant of the tower is a young looking boy. He doesn't know why he is there but is eager to get wisdom, knowledge, and understanding if only he could retain his memories. He suffers from a fragmented memory, gaining and losing memories periodically.  This can affect his emotional state at times. Despite his condition, he presses on in his exploration to attain these values. When fatigue sets in, the boy returns to the ground level to rest under a tree. He eats fruit from the trees when hungry.

The tower derives aesthetics from the Roman Colosseum and Leaning Tower of Pisa. The boy wears a plain white vesture and shorts with some red linings.

The boy himself holds the power in this imaginary world. He is the creator of this world but he lacks access to those memories.

After taking these notes, I took Ira's advice to write a small paragraph detailing a moment in this imaginary world to help envision a scene for illustration.

The boy walks over to the edge of the large platform atop and below which the tower is established. He stares longingly at his reflection and the great tower behind him, desiring to know his purpose and the reason he is there. Despite the colossal appearance of the tower, he knows he must persevere.

Next, I sketched the scene and drew up the line art. And proceeded to add value and colour to the illustration. I drew this scene digitally using a tablet and also made use of reference images using google image search.

This was a fun and unexpectedly exhausting project. I learned new skills and discovered areas of improvement for existing skills, particularly with perspective, line weight, value, and colouring. In retrospect, although I purposely made a small world, I found that I was a little too ambitious in my subject in relation to my current illustration skills. Overall, this project was an educational and humbling experience. 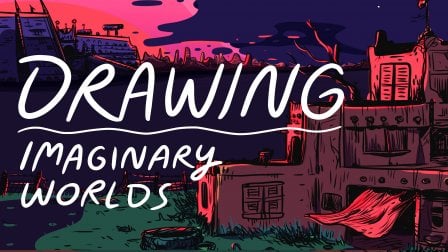