I was prepared to like Miro's work because the eyes kind of remind me of old Spiderman cartoons from the seventies but I think I've fallen in love with his naming conventions, especially starting in the late 30s. While I'm drawn to this one...

...for the name alone:A Dew Drop Falling from a Bird’s Wing Wakes Rosalie, who Has Been Asleep in the Shadow of a Spider’s Web  Seriously, I feel charmed every time I read it. This one:

has the awesome name (Figure At Night Guided By The Phosphorescent Tracks of Snails) AND so many elements that usually speak to me. I love the texture of the background, I love the moon, I love the contrasting use of purple and orange against the blue. And something about the title and the symbols that he chose is reminding me of a "magically realistic" cab ride that I took once.

When I was wee and looking to amuse myself, I would scribble a bunch of circles and loops and lines onto paper and then spend a few hours coloring in all of the shapes that it created. Little did I know that I was using a surrealist technique! So I'm attracted to the idea of playing with automatic drawing to see what kind of shapes I can create and I'd like to ponder that cab ride a little more to see if there's a story worthy of a Miro title! Will upload sketches soon!

I do still plan on doing an actual painting from this because there's still more for me to explore but I thought that sketching out different portions of elements on little squares might actually be the way to approach it rather than my traditional sketchbook. Plus I read in one of the articles that some of his work was done on paper so I was able to make use of the textured acrylic paper in the drawer. I've not added the background texture to these yet.

Some of the elements are from the Miro painting but some of them are my own versions.

I'm going to change up the blue a little on the next run, it wasn't clear until comparing the pictures on the monitor but it's not what I'm looking for yet. To be really honest, it made some of the characters look a little less Miro and a little more Blue Meanie from Yellow Submarine! haha

I've been listening to Paco Pena, a Spanish guitarist who features large in the night of the magical cab ride. I can work for hours to that guitar, I swear. ;D

I may actually add a few more lines to it but I've been walking back and forth past it for a few days now and I like it.

It's called Travelers Protecting JodyLinn From The Deceptive Crescent Moon Laying In Wait On The Edge Of The Sky.

Such a good class!! I can't wait to get started on Klee ;D 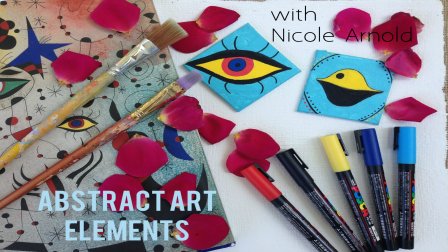