James and the Giant Peach

Hey there everyone! I’m still early in the process, but figured I’d at least share where I’m at thus far.

Jessica has been an inspiration to me ever since I first learned about her work while I was in college back in 2012. I’ve always looked up to designers that use both custom lettering and illustration together, so when I saw this class, I thought it would be a great opportunity and challenge. Thanks for sharing your knowledge and process, Jessica!

I want to startout by admitting that, As a youngster, I was rambunctious and a slow reader. For this reason, I lacked the patience to sit stilI and found little enjoyment in reading. So, when I think back, I don’t really have any found memories of the books I read as a child.

Anyway, since Jessica mentioned that it helps to design from a mental state of familiarity, I thought back to some of the movies that I had enjoyed growing up. And one of the movies that brought vivid imagery to my mind was the animated film, ‘James And The Giant Peach’.

After a quick google search, I realized that the film was based on a children’s novel that was originally written in 1961 by the author British author Roald Dahl. Last weekend I downloaded the e-book and took the following notes as I read:

While I do like both of these directions, I think I'd prefer to design the special edition book cover. Since the book was originally published in 1961, it could hypothetically be a rerelease of the book for the 60th year anniversary of its original release.

I decided to move forward with the sketch on the bottom left outlined in orange, which depicts the massive peach stuck on of the Empire State Building. And since the Empire State Building was designed in an Art Deco style --- I'm thinking that Including some art deco geometric patterns around the boarder could be a nice and elegant way to add to the premium quality I am aiming for in the design. I haven't added much in terms of art deco elements besides the sun beams, but that is where I'll soon focus some attention.

Now that I’ve got my sketch looking a bit more refined, I’m starting to consider colors. Props to Jessica for suggesting I consider a Peach Metallic foil for the lettering. I’m thinking that I’ll take a look at a few more color options for the background and border elements, but for the time being, this is where I’m at. Also, I’m thinking I would like to eventually bring this sketch into illustrator to tighten it up and bring it to the next level in terms of refinement. 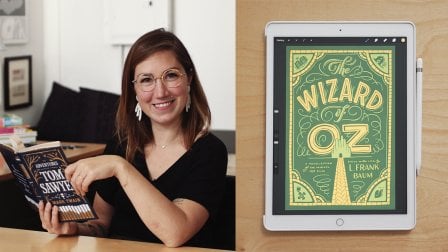