I Really Really Want To Make A Creativity App

During the class I wrote down 3 things I really really want to do:

I was fairly surprised by what came out in my brain dump—as usual. I love using a large run of IKEA paper.

I thought the children's book would be the one I'd end up going for. I thought the reasons would speak for themselves, but like I say during the class, I get pumped when something I do has the potential to help someone else. I couldn't quite make that connection with the children's book. I'd love to spend more time trying to link those 2 things together.

So, I chose Produce creativity app. Whether it should be an app was a big question that came up during the brain dump.

My next steps are finding some "non-creative" people to talk to about creativity and their "non-creativity"—just finding the people, not actually talking to them yet! And doing this for 30 minutes only. Totally doable.

I came up with a few things to try making creating an app even easier. Here's a few I want to try next:

Below are a few other images from the project. 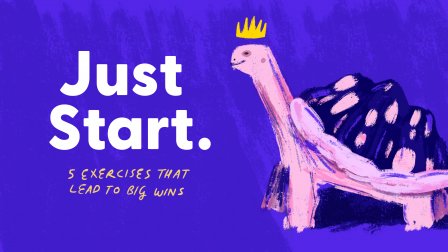