With too many things happening around us at all times has led me to think of things which can slow me down like meditation, yoga, art etc.

So for me, this workshop is an escape from the daily chaos.

Therefore I am channeling a slow mood which can make me calm.

The words I will focus on are:

I looked into classical, relaxing music and Eric Satie's Gymnopédie No1 depicted the words I chose.

After Listening to NPR Podcast Nicole suggested, it gave me a good idea about how Kandinsky worked with his art. I realised that his compositions are well thought out and they were there for a reason. I think that gives more depth to a painting and makes us look into detail more carefully.

Thank you Nicole for guiding us to these beautiful resources.

For reference work, I chose Capricious Forms by Kandinsky. As contradicting as it may look/sound with the words I chose to guide me, I found this particular painting very calming though it had lot of detail. I think the colours and the floating, organic shapes really spoke to me.

Capriciuos, meaning inconsistency, unpredictable change,doesnt convey any sort of calm feeling, though being aware and mindful about the changes can keep us calm. So I am taking inspiration from this painting,  the words I chose and the slow music to guide me to create a piece of art which will ultimately give the feeling of calmness. 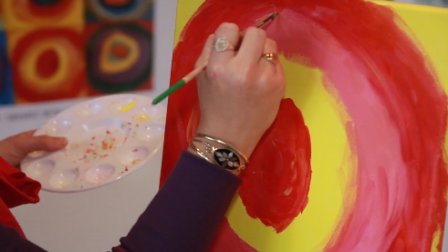