A series of 4 illustrations inspired by my trip to South Korea. Thank you Meagan for creating such a delightful class! It was so fun and it really sparked my imagination. Your art is amazing.

"Dancing with the Wind" depicts the dramatic movement of Korean traditional dances, accentuated by the elegant hanbok.

In contrast to Korean traditional culture, "Chilling in the City" references the hip urban landscape and youth fashion of Seoul. The Hangul words in the background spell out "Hanguk" (i.e. South Korea).

"Bounty of the Land" has a composition inspired by the South Korean flag. The elements include native fruits and vegetables and common dishes like Japchae (fried noodles). 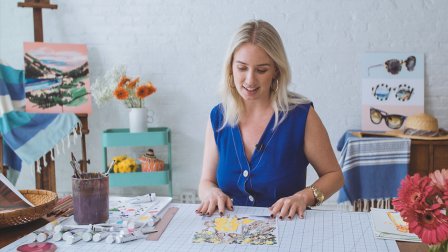