A Creation Myth (Philippines): The Story of Malakas and Maganda

I wanted to go back to my roots, and well, i thought of many things(from folk dances to traditions to folklore)... then i thought of this story. i asked my bestfriend if it was a good idea and she said "it's a great idea! i dont know the story so you should do it! LOL " and so i started to see what i wanted it to be like and that is how this project came to be.

To sum it up, this story is the Filipino version of Adam and Eve, of how the first man and the first woman came to be, and this is how it goes:

In the beginning, there were the sky and the sea. The only thing between them was a bird that kept flying. Finally the bird grew tired of flying and irritated the sea. The sea raged and crossed over its boundary disturbing the peace in the sky. Maddened by the chaos caused by the bird the sky threw rocks at the sea for the bird to rest.

As the bird landed on the rocks it's foot hit a bamboo stick, which pricked it. The bird was so angry it pecked at the stick splitting it in half. From the first half sprang a man and the other, a woman. Thus were the birth of Malakas (Strength) and Maganda (Beauty), the first man and woman.

here's a site that tells the story a little differently: 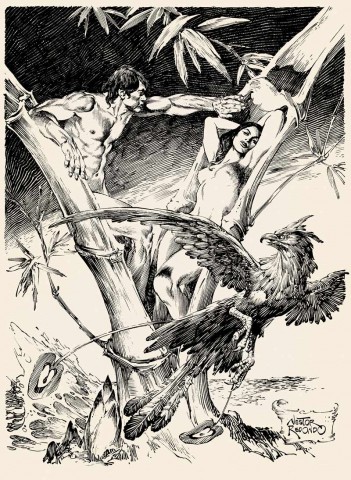 ("Malakas and Maganda" by Nestor Redondo)

I searched on Youtube to see if the story has been animated and i found these, enjoy!