An Exercise in Voice

When I was young - younger – a child, that time period, if I bit my tongue or got a cut in my mouth, my mother had me gargle with saltwater. Salt helps wounds to heal, and water makes it easier to swish. Anyone who has ever gargled saltwater may attest; it burns and rips through your wound like some barnacles I ripped my ankle open on at the beach; to which the cure was also saltwater. “Wade in the ocean until it’s time to go.”

I mention all this to say what words come after this will feel the same to me as saltwater in a wound. It is a wound, but just like I don't I have scars from the barnacles anymore, it's not an open one. I have always struggled to find my voice, my out-loud voice, and one day I crossed the line. I had been working very hard to share my opinions out loud in college, and one day I slipped because of that hard-worked out practice. It was a Literature class. We were discussing a play. The main character of the play was one Hedda Gabler, and the only thing I remember about the whole semester-long class is this one conversation about pity. You see, at the end of the play, TRIGGER WARNING/SPOILER ALERT, she took her life. The class was going on about how much they pitied her, and I couldn’t catch the words fast enough before “I don’t” slipped out. Oh, what a moment! The class only ever once turned on me that quickly before, when they found out I was a Republican. I became a villain to them instantly. Heartless, lacking empathy, and judgmental. Which they had only accused me of once before when they found out I was a Christian. It shut me up.

I couldn’t respond to them because I realized that it would be sharing too much. Just like when they assumed who I was based on what they thought of as a republican and a Christian and a Christian republican, they had put me in a mold, and I couldn’t dare say out loud anything to change their minds. How could I tell them it was heart-ache, lack in longing, and jealousy. People like to stop at our labels. They had no way to know what had happened shortly after the age of wading in the ocean. You see, the reason may have been bad, but I was angry with Hedda. She committed suicide because she had done horrible things, and she took her fate in her hands before the consequences could catch up to her. She did it to escape consequences, in my interpretive opinion. She got to leave, but I had to stay. TRIGGER WARNING/SPOILER ALERT I had battled with suicidal thoughts for years because of things that were beyond my control, but I am okay now. But I was jealous that I had to fight and stay through horrible things that were beyond my control, and she got to just quit and leave because she did horrible things and didn’t want to deal with the fallout.

Speaking of fallout from actions, don't search me out to talk me off a ledge I'm not standing on. I believe in being honest when there is a chance someone might be helped by sharing the prickly bits in life. But I digress, otherwise you'll be pulling me off a soap box instead.

I learned that day that finding your voice, doesn’t mean letting all things out at all times, but also that stories must be told regardless of what people think about them because they still matter. I have never told anyone about Hedda Gabbler before, but I am prepared to face the mold I’ll be put in this time.

There is a Story Keeper in all of us. 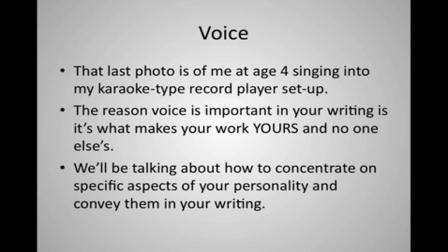