Lately, my biggest problem hasn't been HOW to draw, but WHAT to draw, so I saw this class as a good opportunity to force myself to go all out, despite my usual lack of motivation. I feel like I've stagnated and should focus more on improving and challenging myself.

So, with that in mind, I decided to draw an illustration featuring a random elf dude I drew a while back:

Who I knew nothing about at the time of creating him. I still don't know much, to be honest, except the fact that his name is Eltherian (Erian for short) and he's an elf mage. But I guess you don't really need more than that?

Since I wanted to challenge myself, I decided on a magic battle in a winter forest with some kind of ghoul-like creatures, fondly nicknamed Glow Bois. And, for the first time in my drawing career, I created a moodboard. Which was fun and definitely something I should be doing more often. My colour scheme evolved rather naturally during this stage of the process, with cold blue as the main colour and warm reds and yellows for the magic.

This was followed by various sketches to decide on an outfit and hairdo. The one furthest to the left is his standard design.

And, after that, just to try inking again (which I haven't done in six years or so) I did a simple character image in traditional media.

Unfortunately, I used a new fine liner and it turns out it couldn't handle oil-based colouring pencils, which meant I had to use a cheap brand instead of my fancy ones. Still, it came out looking pretty good.

Fun fact: his legs are made with a Chinese colouring pencil that's older than me. I have no idea how it ended up in my possession, but I love it. Because it really is that black, yes.

Then, of course, came the final, bombastic illustration. I honestly did quite a few thumbnails to try out the composition, but these four were the ones I liked the best.

I had a hard time deciding which one to use, however, and I ended up combining several of them into my final sketch.

Then came the colouring, during which I challenged myself even more. I tried to be mindful of my values, lighting, and colours in a way I'm usually not. All in all, I think it turned out really well and I'm very proud.

For the first time, I used a very textured brush while rendering, which can only really be seen when you zoom in. The background is especially rough, for being me. So, here, have a close-up!

So yeah! I would definitely call this a successful project. It pushed my limits and while it might not have brought me out of my motivational slump entirely, I'm certainly getting there.

Now I just have to figure out what to draw next.

On a quest to find motivation 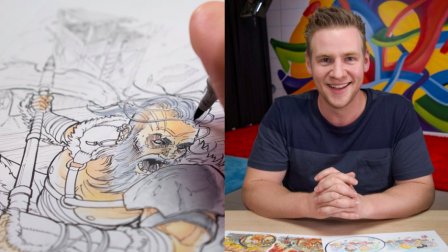