So I haven't finished all the prompts just yet, but I'll share the ones I have finished and update as I complete the others.

I enjoyed the quick, intuitive action of this activity and experimenting with some new materials. I tried out some new knockoff Copic style markers, and am now deciding which of my children to sell of to buy a set of real Copic markers- SO FUN to play with! The Posca pens I recently bought to experiment with were a bit too thin to play with for color mixing, but came in handy for later prompts. I love playing with watercolors and admittedly the rainbow spread was planned, but I wanted to play with the color mixing of wet on wet.

THIS is what it reminded me of-

Yeah, have fun analyzing that- HAHA!

I found a piece of polycarbonate in our garage leftover from some project of my husband's, so I claimed it and painted it up. I would have painted on our sliding glass doors around the house, but those are already decorated with finger smudges and my three-year-old using her dirty paint water to "clean" the windows...

I did have fun with this prompt, although the paint markers I was using felt a bit on the noxious side. This makes me want to paint on the windows at the holidays now with the kids instead of getting those window stickers and gel window clings. Anyone tried chalkboard markers on glass? I wonder how those might work...

Or as my three-year-old would have described it - "Defacing Food!" She was NOT amused when I first showed her the bottle of orange juice and was convinced I had somehow ruined the products I drew on. She came around though and eventually thought it was hysterical, so I'll likely keep doing this as surprises for my kids to find.

FUN! I did this around the house while my daughter napped. Again, totally one of these silly and fun exercises that I will likely continue doing just to surprise & entertain my kids! I found the kitchen appliances to be the most fun to give the gift of sight (that blue kettle looks like a pig in Angry Birds!), but making Real Housewives (my guilty pleasure crap TV to have on in the background while I draw!) look like they'd had bad work done was highly amusing as well! 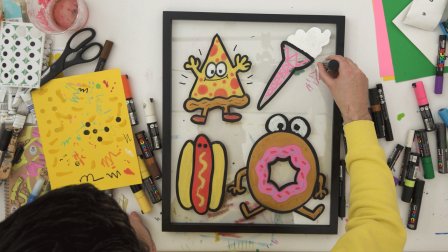