For my lettering system, I decided to base it off a book cover I designed recently. I believe a lettering system works well for a book because there are so many opportunities for interior illustrations and lettering.

Right away I knew I wanted to design the back cover, ex libris and chapter headers.

Above: My final sketch for the book cover.

Above is the final cover which I will use to reference all the interior lettering and illustrations.

First was to sketch out rough ideas for the interior illustrations.

The thumbnails above are very rough, I just wanted to get ideas together. The lists are just options for different illustrations and motifs that can be carried throughout that were featured on the cover.

The rough sketches for the ex libris

Now that I see all the sketches together, I can make a decision for which illustration will work best with the lettering system. I don't want everything to feel repetitive so because the cover is so illustrative and detailed, I want the next illustration to be more simpler. While I liked the ring leader shouting the person's name, I think it is too similar to the cover. I think the bold lettering will create better flow in the lettering system.

Rough sketches for the chapter page

Sketches for the chapter page. The chapter page illustration will change for each story so I know I want it to have a the opportunity to include a motif that is baed on that chapter's story. So I think I am drawn to the ring leader announcing the story title. It's the first story in the book so I think it's apporpriate.

I wanted to carry the same border and characters and energy from the cover on to the back cover, but with this great intro into the story.

For my tighter sketch, I didn't inlcude the border or clown because I will grab those from the final cover image. I still have some adjustments to make before it gets inked but I feel the style and general spacing has been resolved. 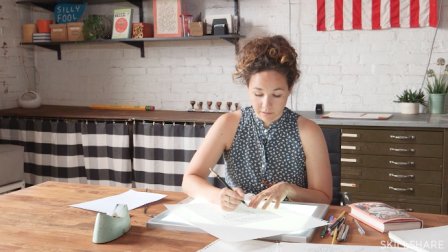