I'm super excited about this - I've wanted to get into 3D printing, but didn't really know how to start. So far this is fun and really approachable! :) 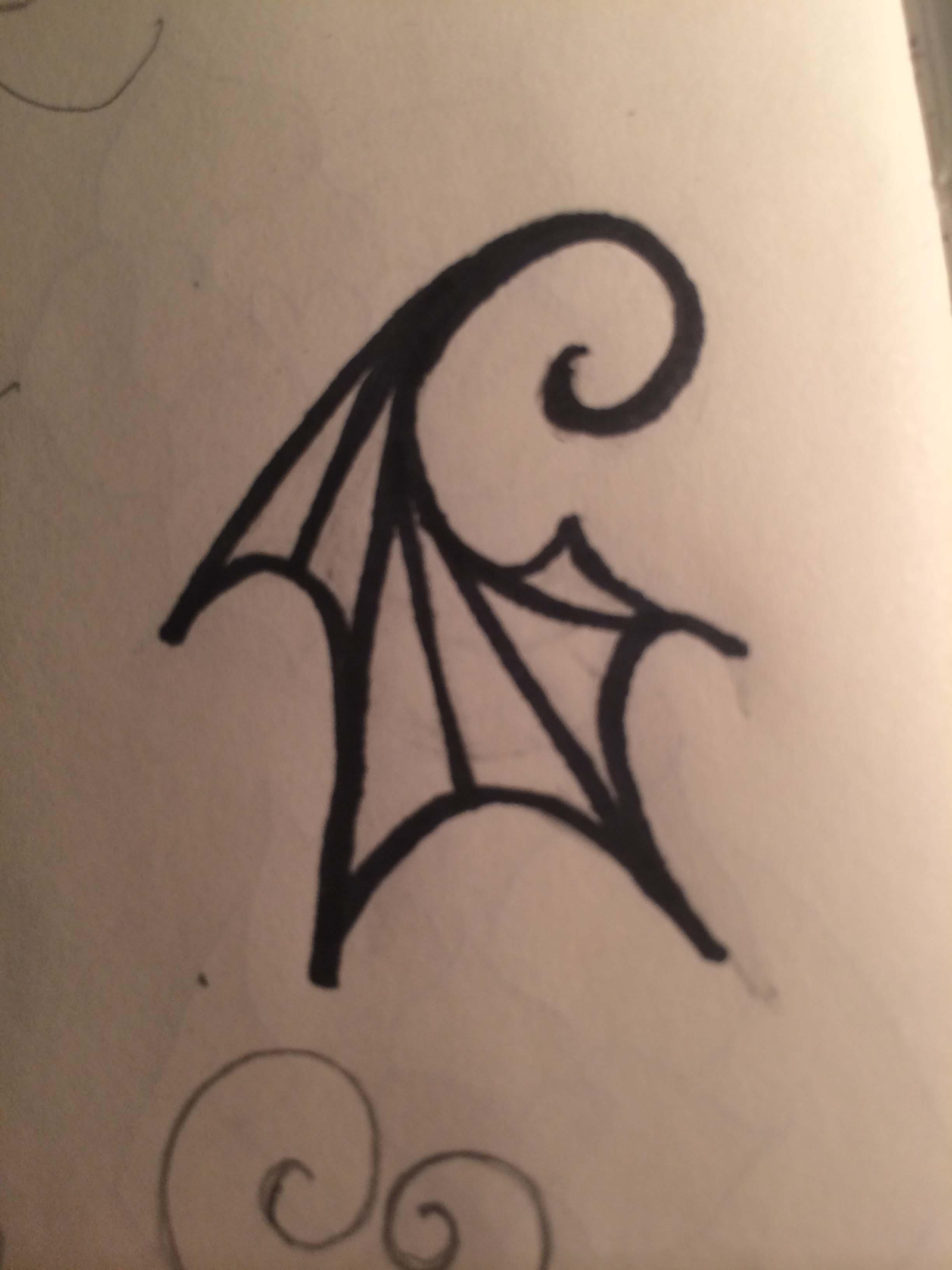 So far I've cleaned it up in photoshop: 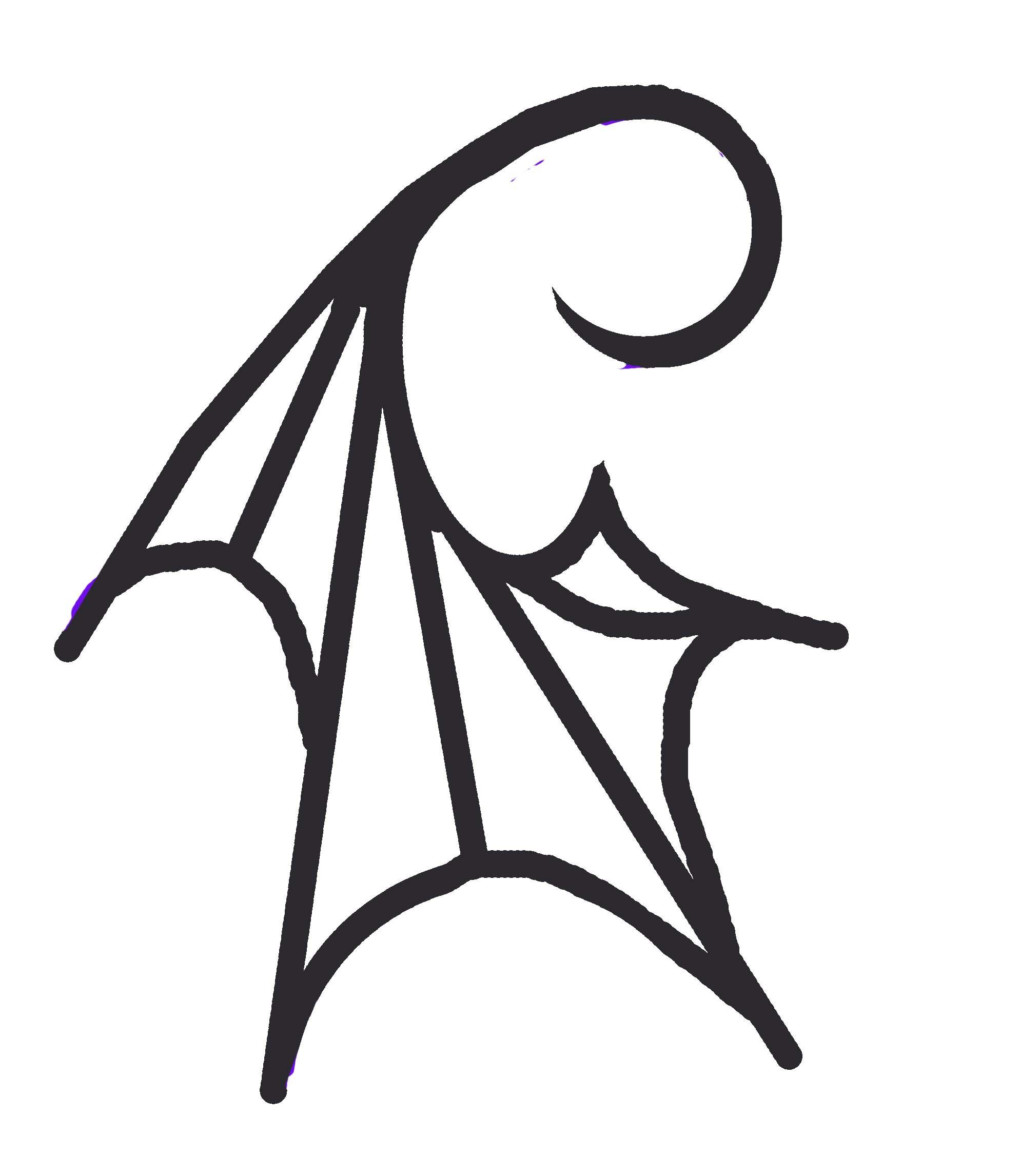 I'm having a friend who owns Illustrator (I only own Photoshop) save out paths for me, and I'll start on the 3D part. :D

My friend cleaned up my lines in illustrator so I could get a cleaner object, and then I imported it into Tinkercad: 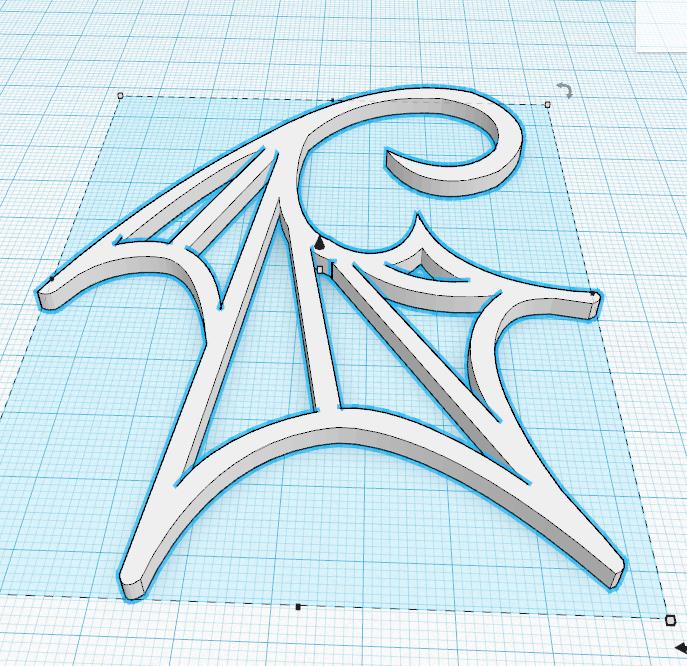 I'm not really digging the hard edges so I'm going to try being crazy with it - First I exported it from TinkerCad as an OBJ. Then I brought it in to 3DStudio Max, and applied a meshsmooth modifier to the object. Here it is in 3DSMax: 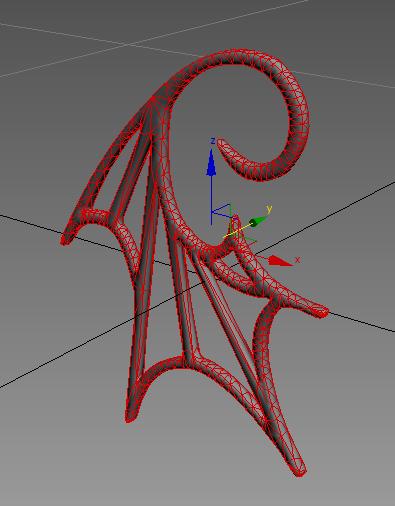 So next I'm going to bring it back in to TinkerCad so that I can get the measurements to the exact specifications that I'd like.

After applying Meshsmooth, I brought it back in to TinkerCad: 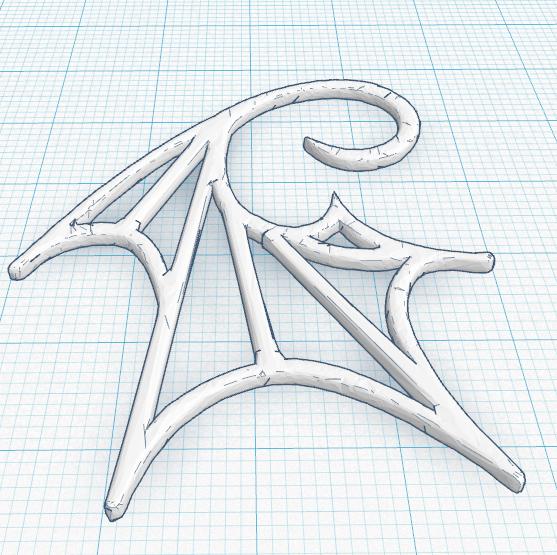 I'm a little unsure of how this will work out. Worst case scenario, I'll print it as is, and sand the final object? Not sure yet. :)

Ok, so I went to put it into Shapeways, and after reading through the submission best practices, realized I should double check this thing to make sure it's all error free.

Fortunately, a google search showed me a fantastic way to check my object with 3DStudioMax (apologies to people not using Max! I feel bad deviating from the lesson plan, heh, but if you want to try it out, I believe autodesk offers a 30 day trial. :D)

In 3DStudio Max, create a clean scene and import your OBJ from TinkerCad. Do what you'd like (in my case used a MeshSmooth modifier and cleaned stuff up through booleans).

After that, use the dropdown modifier "STLCheck" on your object. Check everything, set your Mat-ID to 1, and pick select edges, and then check off "Check" You should see a number computing next to your mouse for a brief second, and then in the status below, it will show your errors. I had 507 errors. Whoops.

If that happens to you, you immediately realize the important of saving iterations of files. I opened my file from before I'd added the meshsmooth modifer and did an STL Check on that model, and got 3 errors, which I fixed.Then I applied my meshsmooth modifer, and viola, no errors! It still looks a little wonky, but maybe that won't translate in the printing? Not sure, since the scale of my object is so small.

So NOW I'm in theory ready to print. I exported my model from Max using Export -> .STL File (the option isn't available if you do Export Selected). 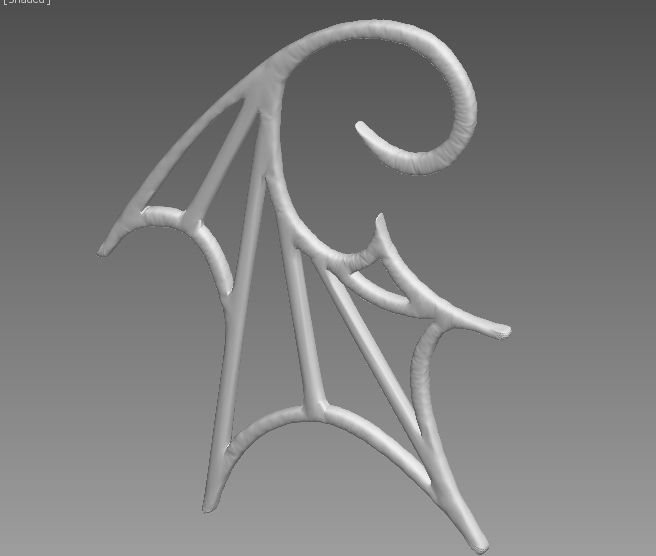 Off to teh Shapeways!

Ok, Shapeways hates pointed edges, heh. Off to round off my corners slightly more!

So long story short, a Meshsmooth modifier in Max just plain won't work for getting a clean, smooth object. So, I went into Max and created a cylinder, and slowly bent the cylinder to match the shape of my batwing object. 8 million hours later, I wound up with this: 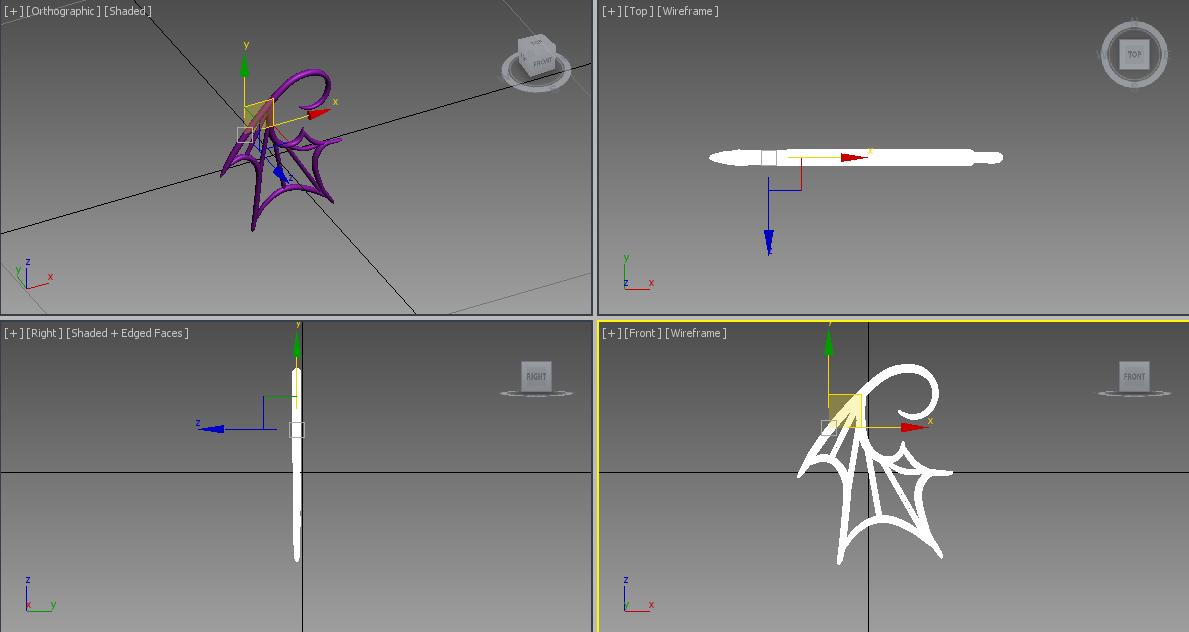 So now I've gone completely off into left field with this project, so if you give up on reading this, I don't blame you. However, if you do really want a nice smooth rounded shape, I would highly recommend learning Blender, or playing around with a 30 day trial of Max. :D

After modeling, I did the STL check again (no errors, whoo!) in Max, then exported the scene as an STL file which I then uploaded to Shapeways. Shockingly, I had no thin edge warnings! So, in the scariest move yet, I threw money at them and ordered one.

Ten minutes later, I decided I should probably double check the dimensions of my object in tinkercad, and oh boy! It's 1mm larger than it should be! Oof. So on the off chance that you need to cancel an order with Shapeways, I can tell you it's quite easy and painless while still in the processing phase! Hooray, learning!

So, I imported my stl file into Tinkercad, resized it, and exported it. I noticed that Tinkercad is wayyyy better at showing rough edges than 3DSMax so I went back and for adjusting a few things until I was happy with it.

Take two - uploaded it, no errors, threw some money at them and...hooray! Now I wait! I'll update in 4-6 weeks when I get my pieces. :D If anyone's curious as to my shape and specificity with sizing and smoothness, it's because I'm making 8G earrings for stretched ears. Cross your fingers for me that they turn out! :)

Update - 2/20 Ooooh, just got my shipment notification! So it seems like for small pieces at least that the turnaround can be shorter than 4 weeks. Good to know! Shapeways communication is pretty great so far.I'll post pics once I get my stuff! :D

Aaaand here it is! 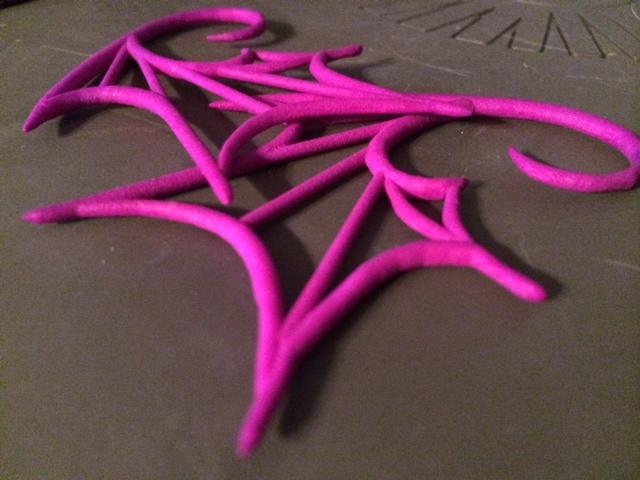 Annnd here it is in action: 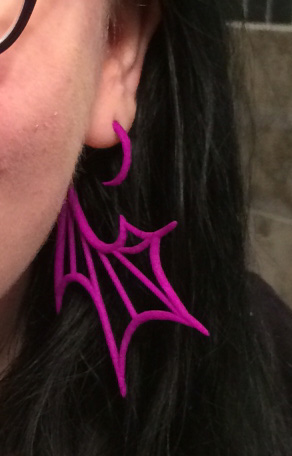 YAY! A little bigger than I expected, but no less fabulous! Now to see what else i can get myself into! :D

So, on a whim, I was curious if I could get better results working with a design that I made solely in Photoshop, instead of doing any hand drawing. I was surprised at just how much easier it was this time around!

I'm aiming to make a penguin necklace. Nothing fancy, just flat plastic that I can put on a chain. Here's my starting image - cleaned it up with the pen tool and got the following: 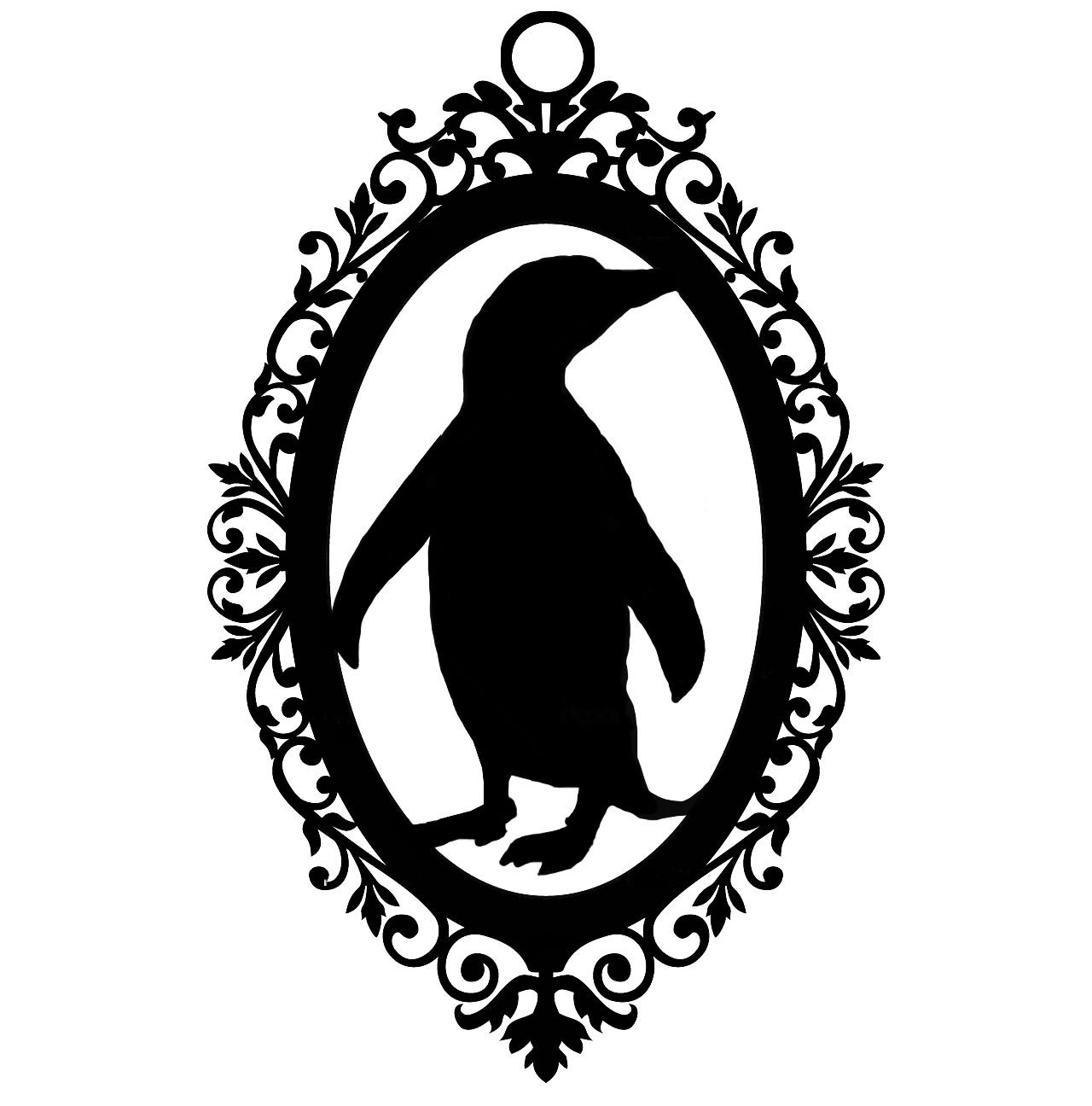 After that I took it into a trial of Illustrator that I downloaded, converted it, and brought it into Tinkercard. I couldn't believe how well it translated!! So crazy! 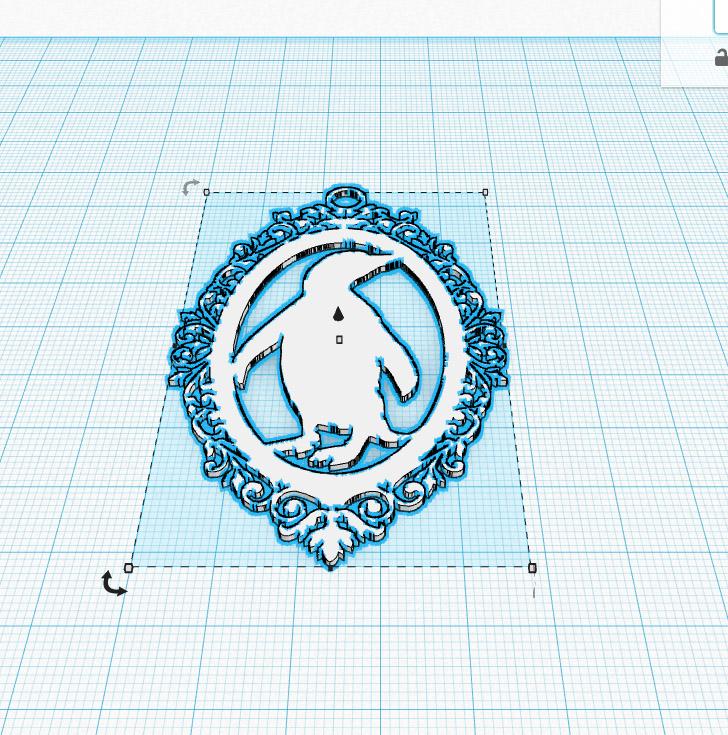 I brought it in at 25% and scaled it from there, so as not to crash Tinkercad, heh. Man, so much easier working with a flat design. I really started 3D printing in the most complicated way possible, haha.

From there, I brought it into Shapeways. I got a thin wall warning, but their Fix Attempt worked on it, and I was able to order it tonight! 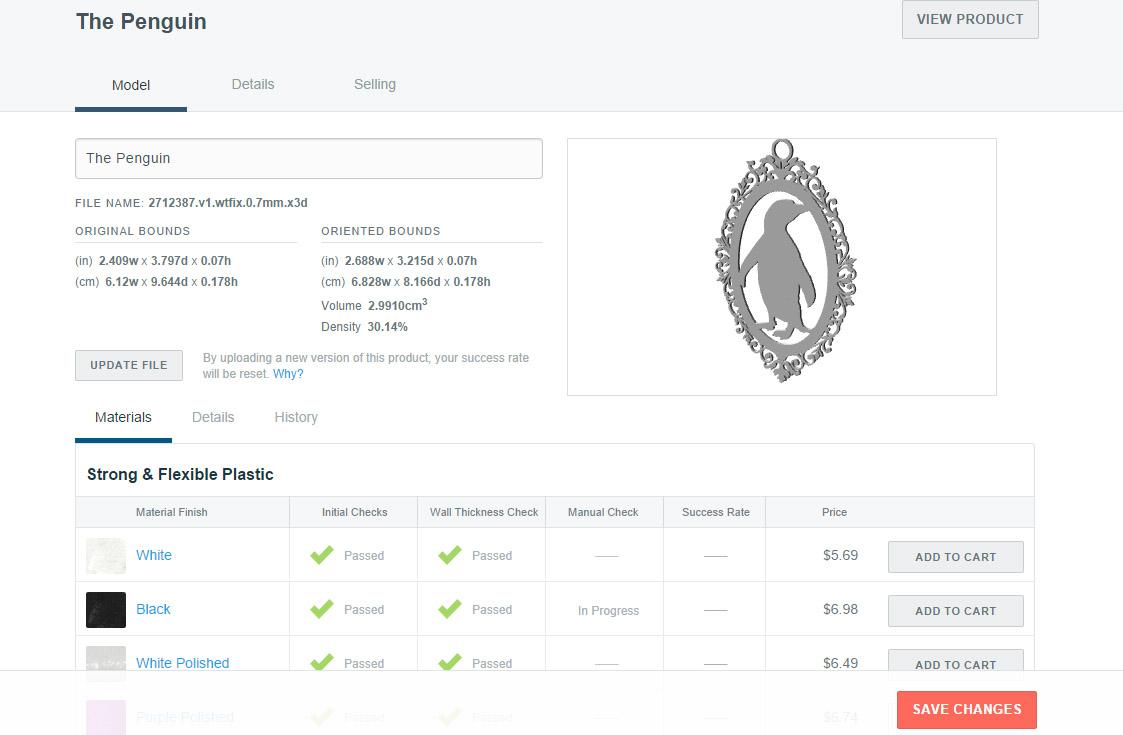 Sooo, I've ordered it in black flexible plastic. Was debating doing the black detail plastic, but hopefully the black flexible will work out ok. I'll update once I get it, which is apparently between October 10th-15th. So excited!

I can't get over how much easier this was the second time around - this is the best Skillshare class ever. :D 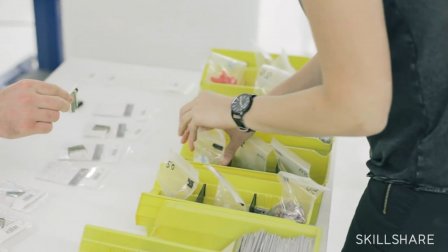