This class has really inspired me to start teaching here on skillshare! If you are interested. Please feel free to check out and enroll in my two illustration courses below:

Hope to see you there!!

Hope your new years and holiday was awesome sauce.

I redid the illustration for pig 2's house. I felt it didn't really match the vibe of my characters. 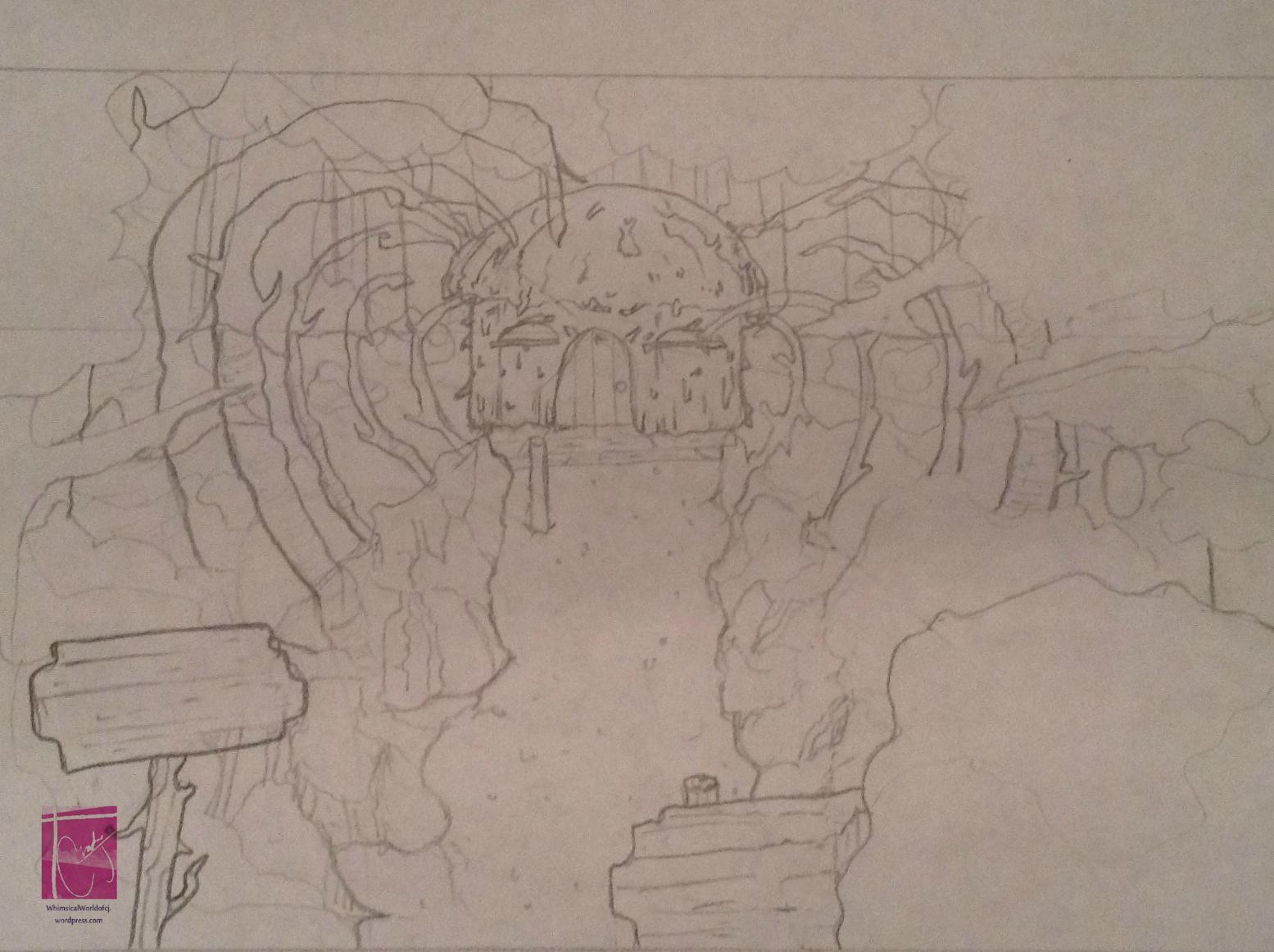 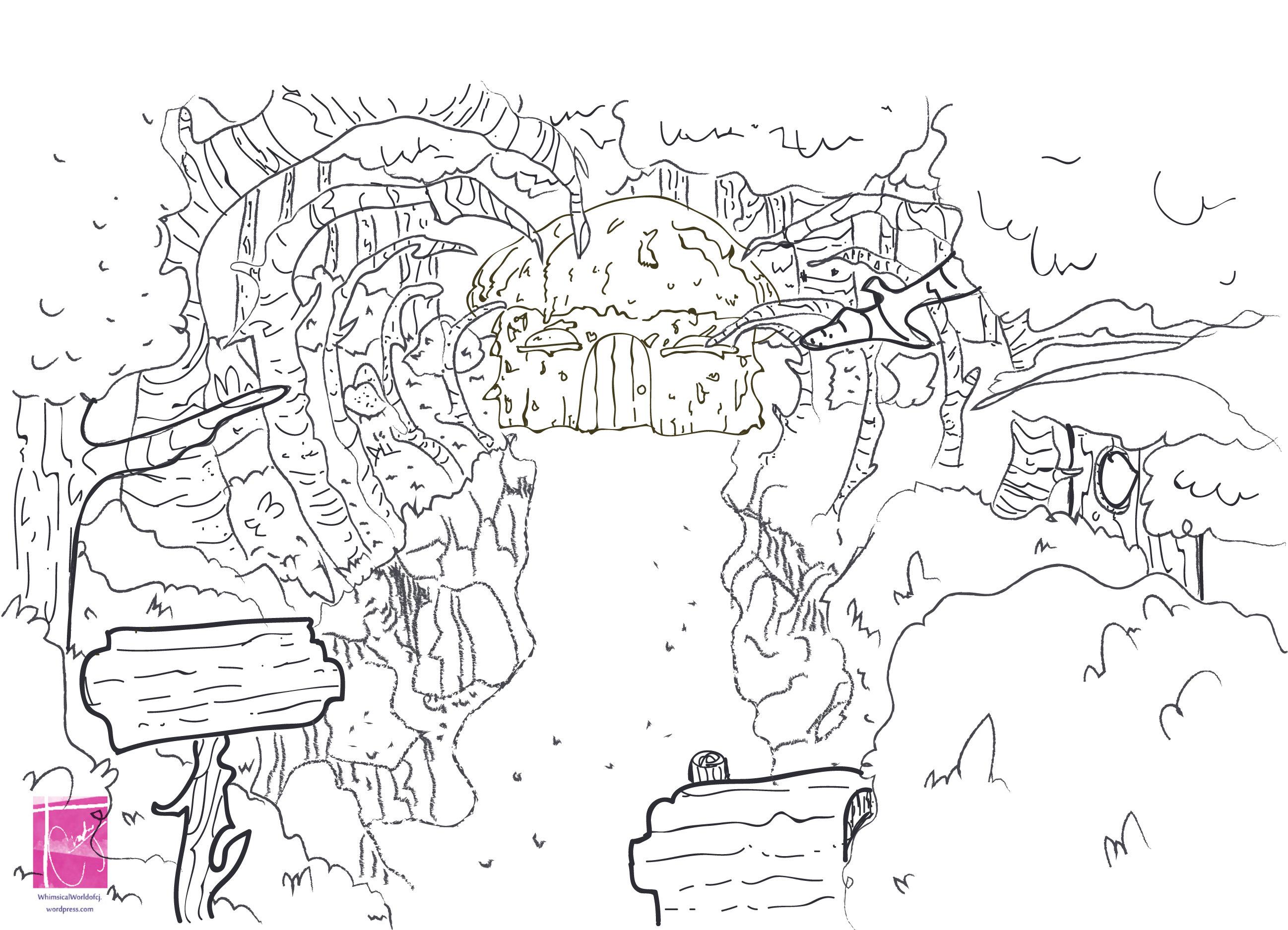 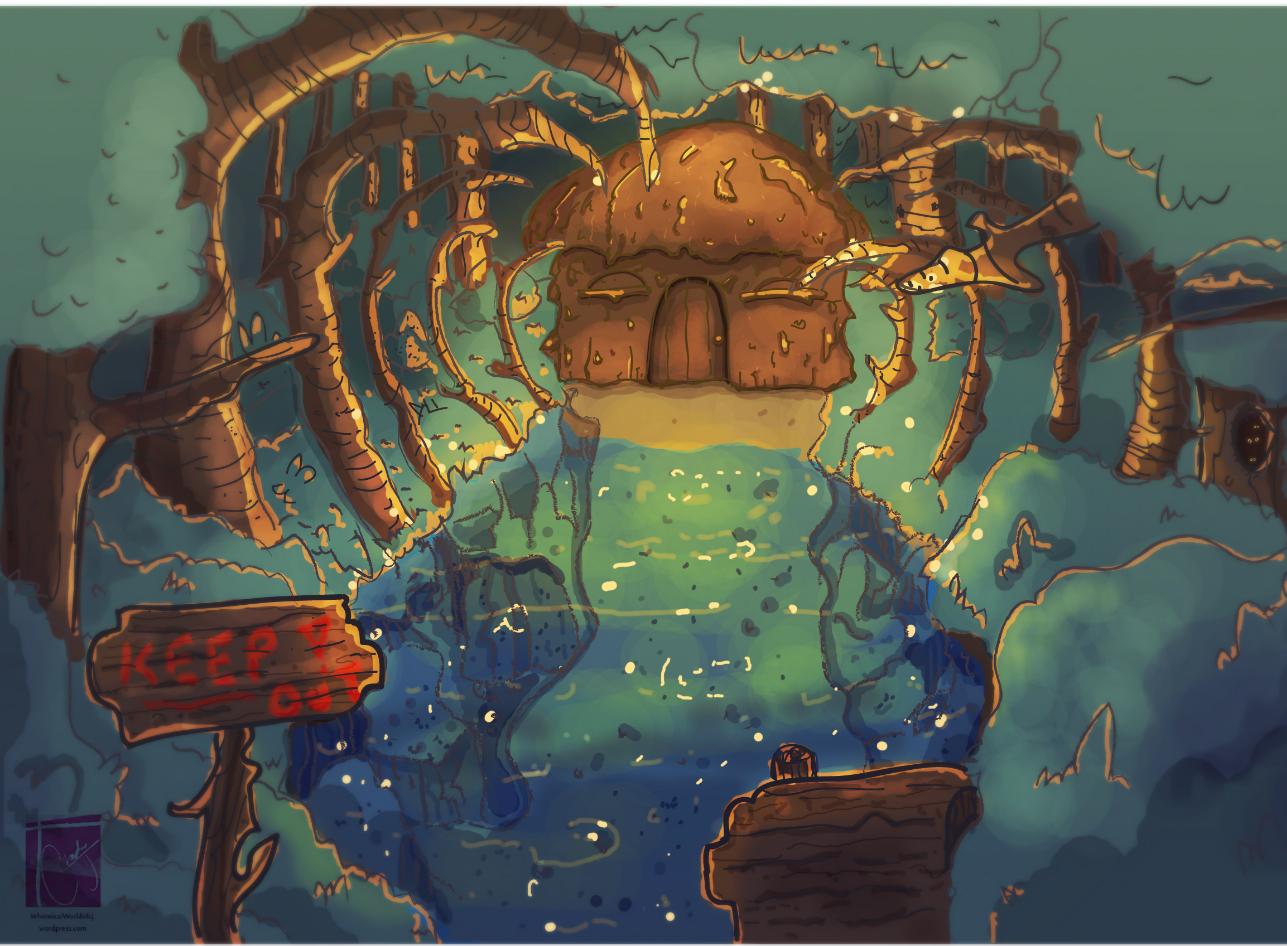 So Guys! It has been a few days. But I managed to pull an all nighter and did the line art and coloring for the sketch below of Pig three's hallway of where he calls Red. 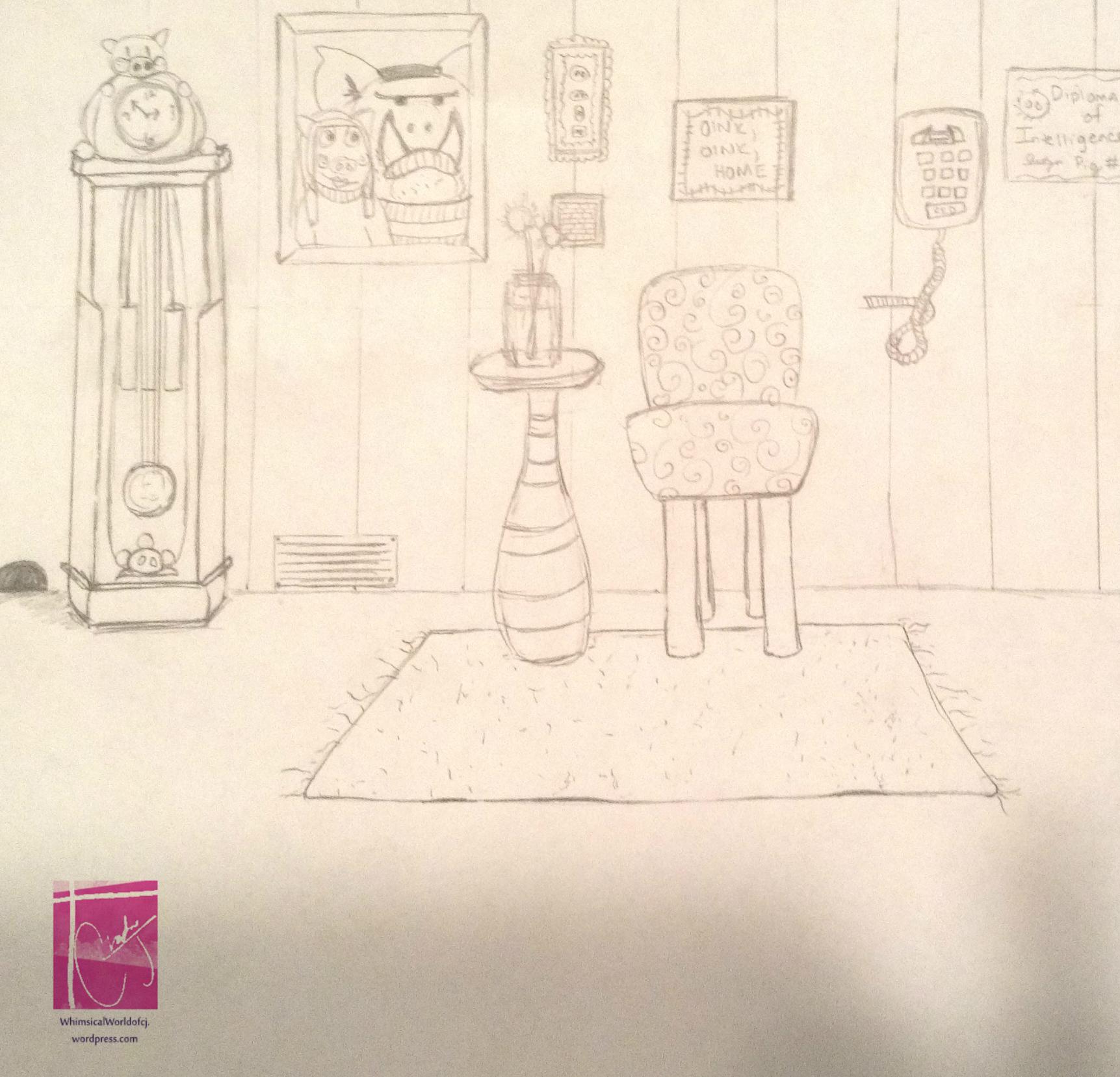 Preliminary Sketch- The character was supposed to be drawn in photoshop with the phone, but I decided not to at the last minute. 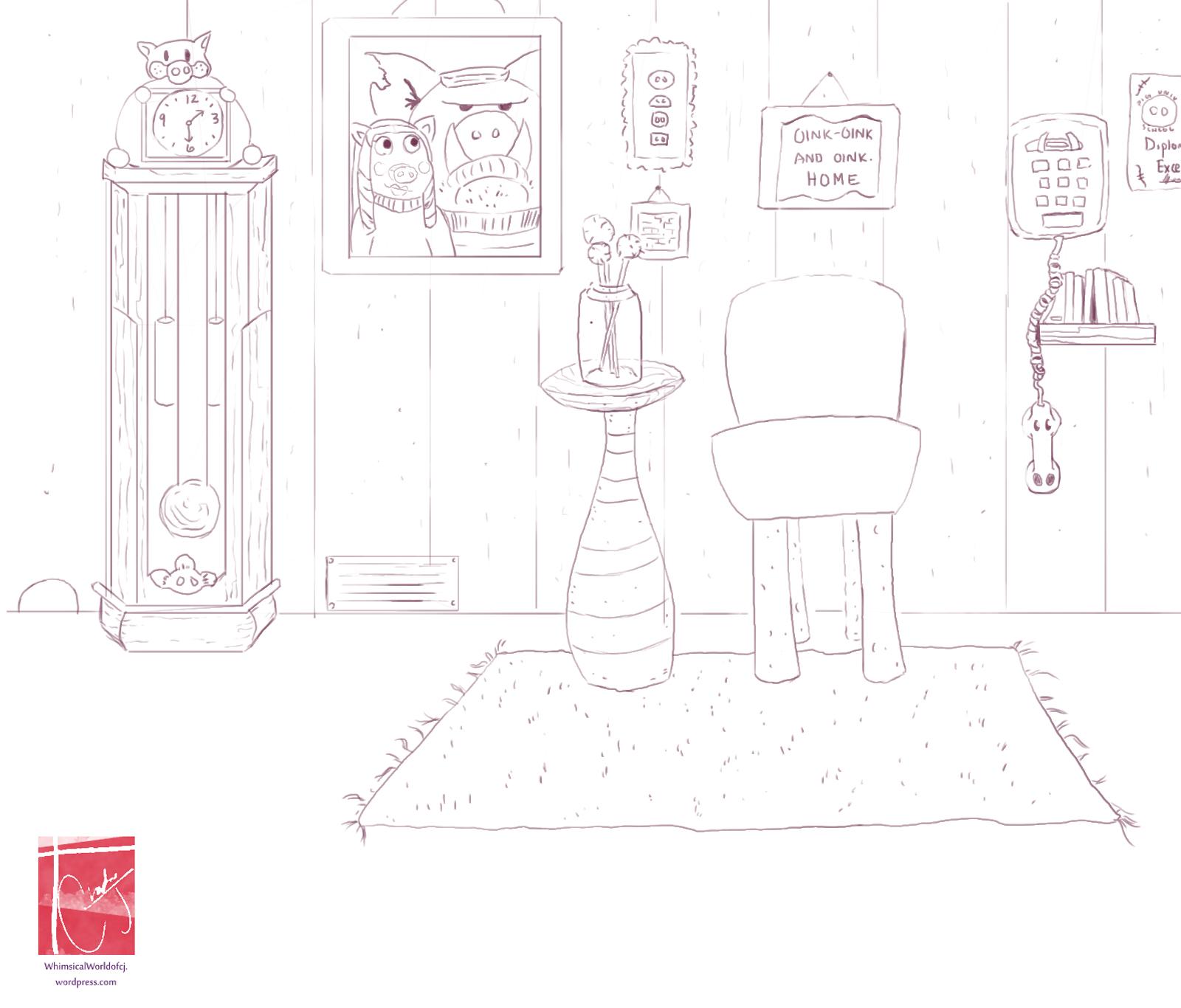 Finished Line-Art (Takes Place after Pig #3 gets off the phone) Notice that I use a purple color to do the line art instead of black. Changing the color made it not so harsh, and easier on the eye. I may redraw my characters with a lighter line. 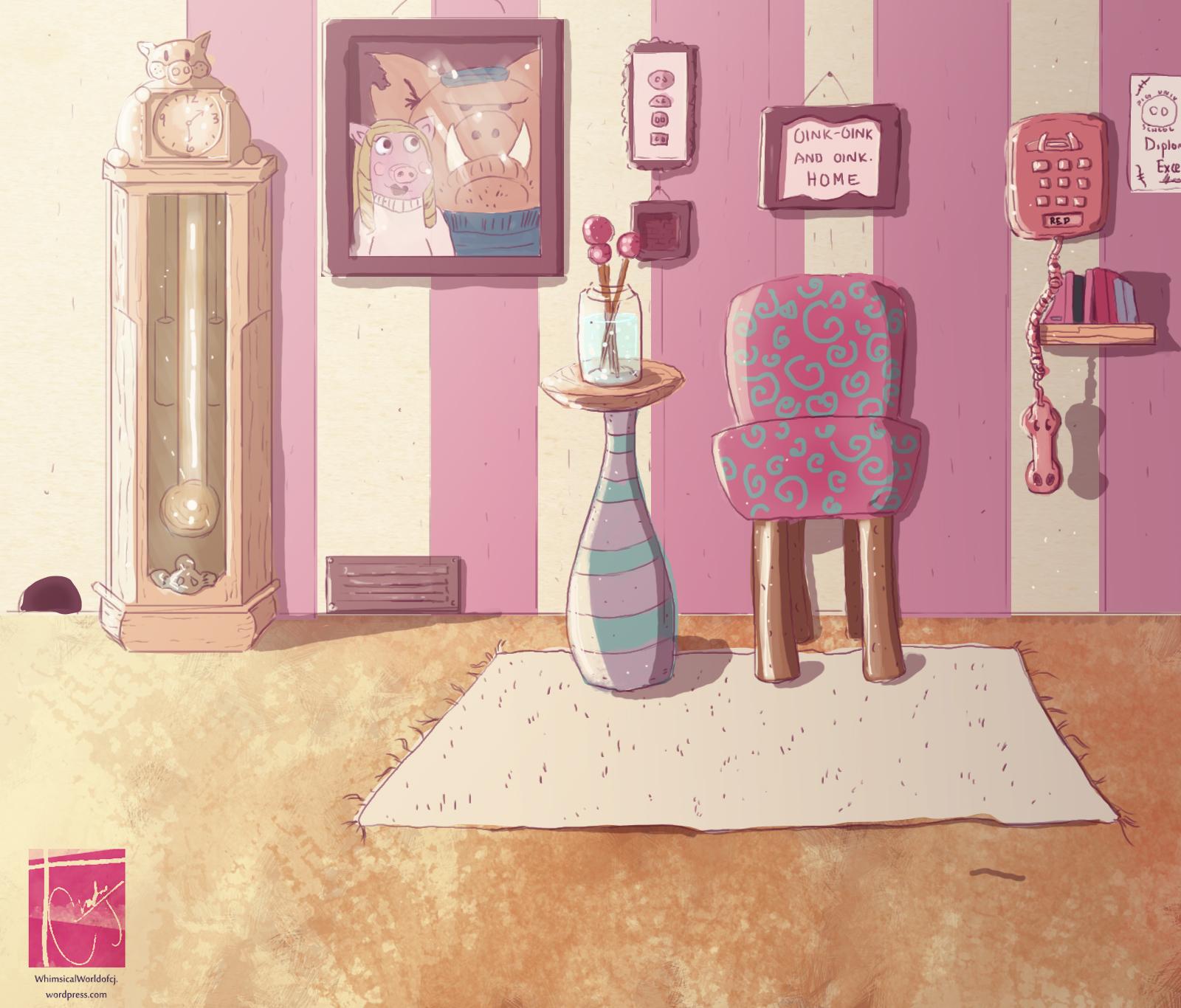 Final Illustration- I used tons of texture and restricted pallete to keep up with color balance. I tried not to do anything to crazy,lol. I thought pinks and purples would fit in nicely with pigs. And those are his parents at the top. Ain't they cute?

DISCLAIMER:It is currently in the very early a.m, so my brain has shut down somewhat, so please bare with me if there are typos.lol

The interesting thing about backgrounds is that its success or failure is dependent upon composition, color and line. I tried to vary the line quality of the drawing to give it more depth like the teacher suggested. Not being so monotonous with the lines really helped.

As inspiration for the piece I watched tons of cartoons and looked up artwork from artists and illustrators I admire. They all shared a great balance of color, depth, and light in their works. The cartoon feel is what I was going for with my characters.

As a result of what I learned from this piece, is that I should start my sketches on paper. I feel less restricted and a result can add quirky things to the environment where other wise I would be to distracted with making everything perfect. In my straw house illustration that is exactly what I did- when straight to creating a finished work without much thought on cool things I could add to make the environment inviting. As a result, I was not too happy about it. It was good, just not what I was looking for.

I have to say that I am rather proud of this illustration, and look forward to posting more illustrations of various scenes of story.

Little tired, So I'm calling it a night.

Let me know your thoughts, and or advice! 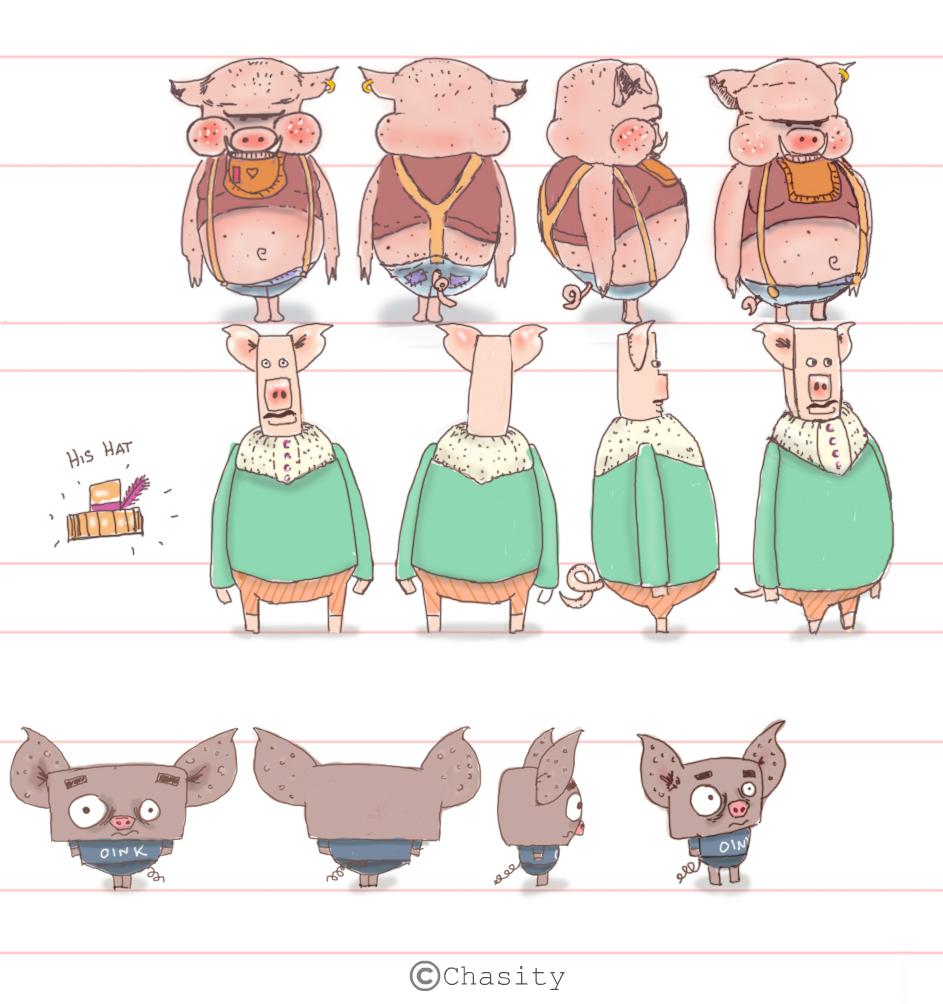 I was pretty inspired by my last post and decided to fit the style of the illustration, I would change the overall look of the pig #1. I also decided to do turnarounds for all the three pigs with color.

The pallette for pig #1 is similar to the colors involved in the other render. That way the spirit of the character was still there.

I'm starting to get a feel for what my style of drawing is.

And a quick comeback!

I decided to color the line art again.

I am much happier with this than the other coloring.

It is easier on the eye. 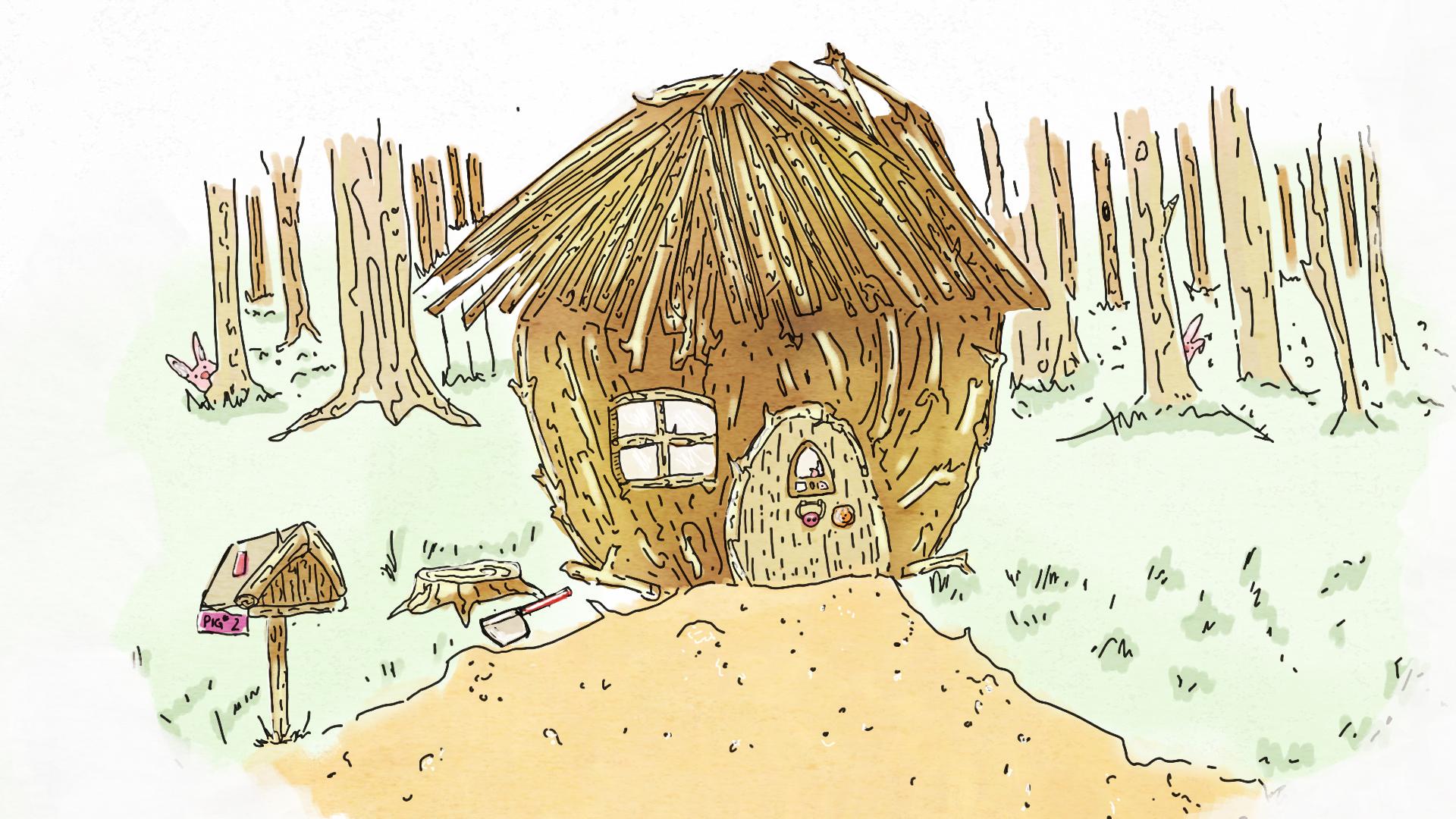 I had to take a break with the project as I was having trouble with starting the illustration process for the scenery. I have a huge anxiety when it comes to drawing backgrounds. It is usually a hit or miss with me. I checked out some children's books this weekend for some much needed illustration ideas for backgrounds. I wanted to see how other illustrators approached creating backgrounds.

Alas, at the end I just decided to have at it and not worry too much if it looks good or not, so I went ahead and sketched a drawing of pig 2's stick house. Here is the uncolored sketch I created in bamboo paper app. 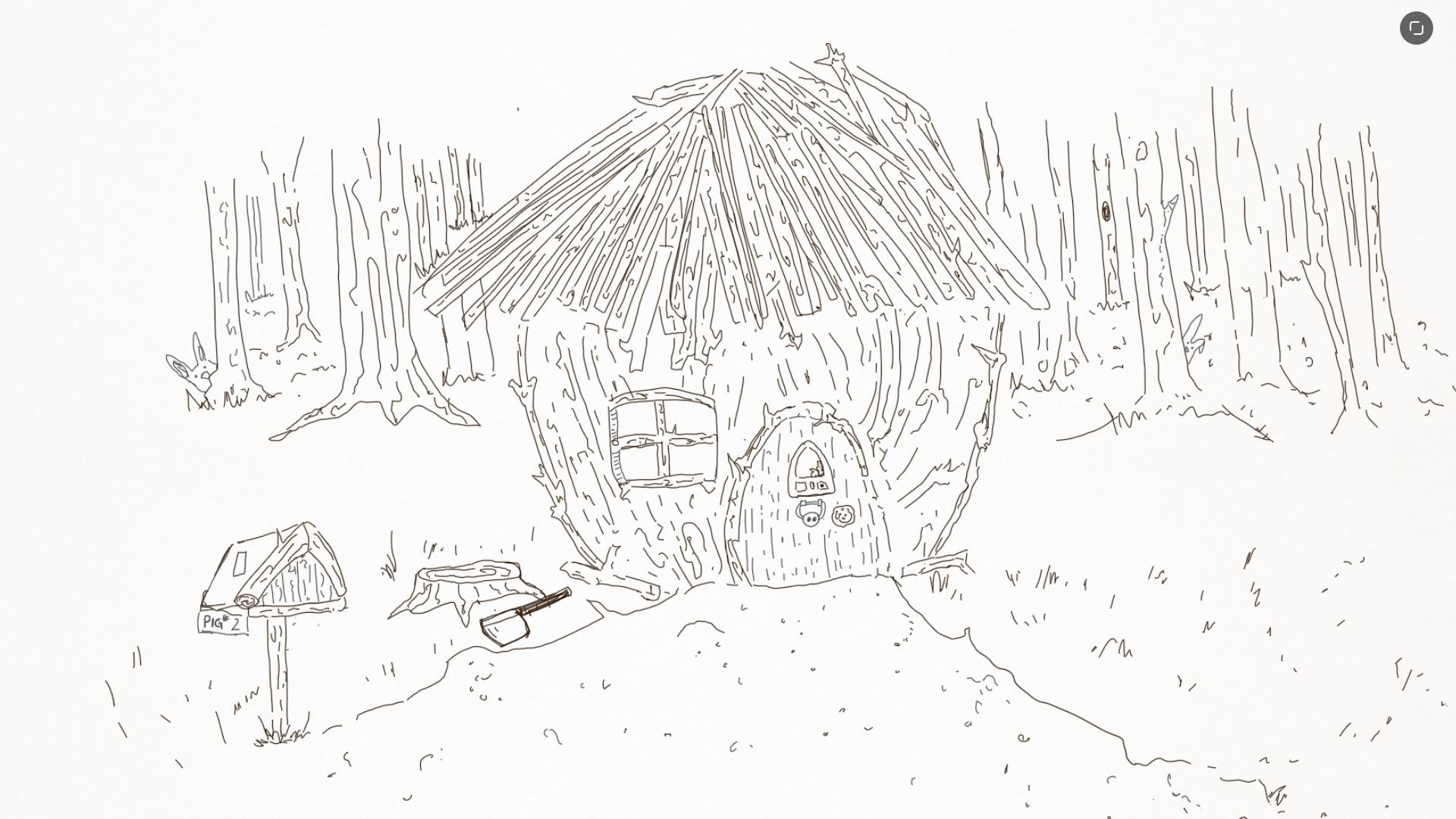 and here is my attempt with the colored version. 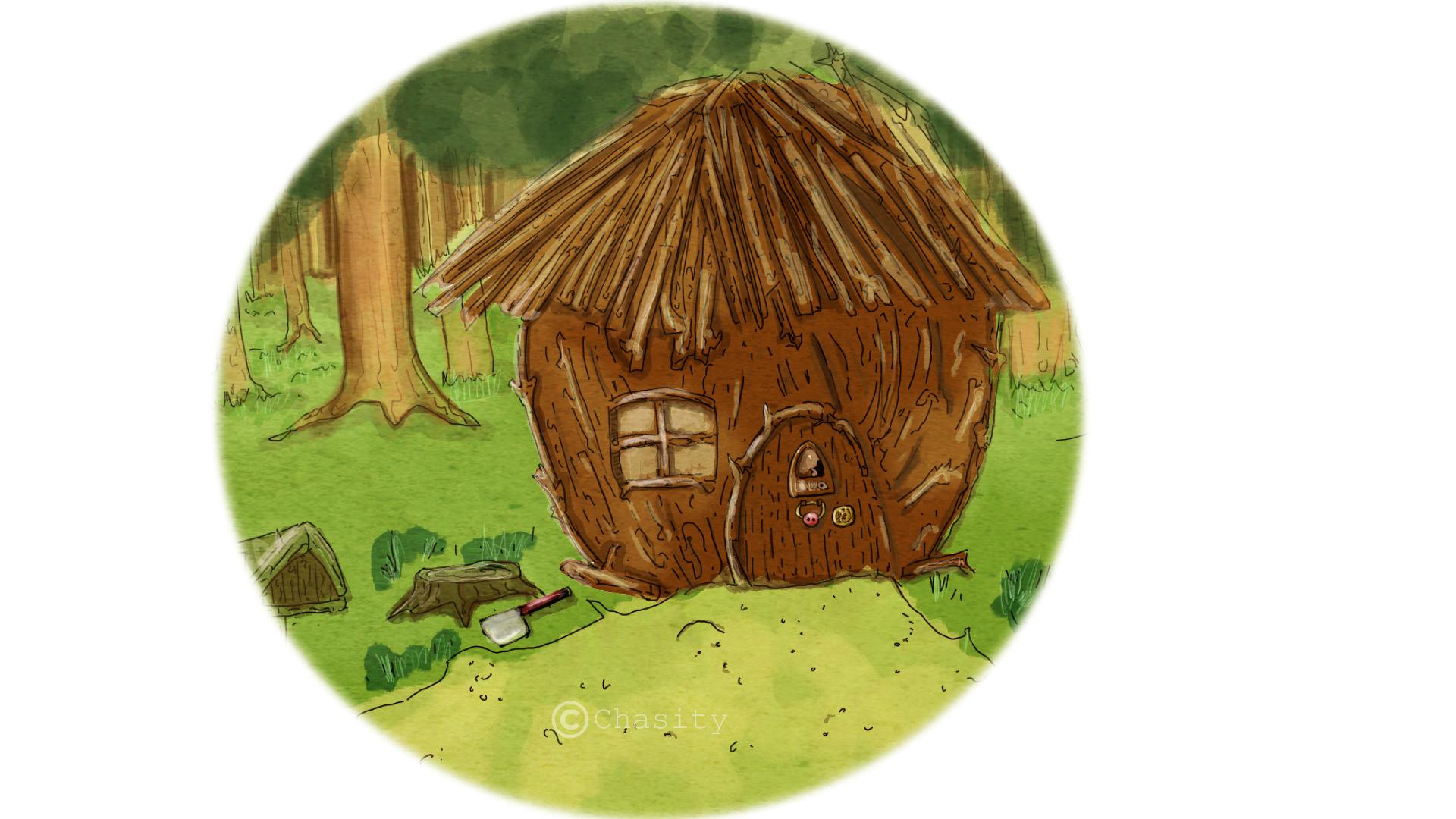 I am not too happy with it. I had cut out a huge part of th illustration imagining how it would be presented on one of the pages.

If you have any coloring suggestions, let me know!

I really am trying to get better at creating backgrounds.

Hello everyone. So I finished the storyboard. It is rather ugly. Forgive me for that. I drew it on my ipad with the worlds worst stylus. It made me focus more on the idea rather than get wrapped up in the details, so I yeah... Anyway, here it is.

The straight lines represent text. The other crudely drawn sketches are characters. 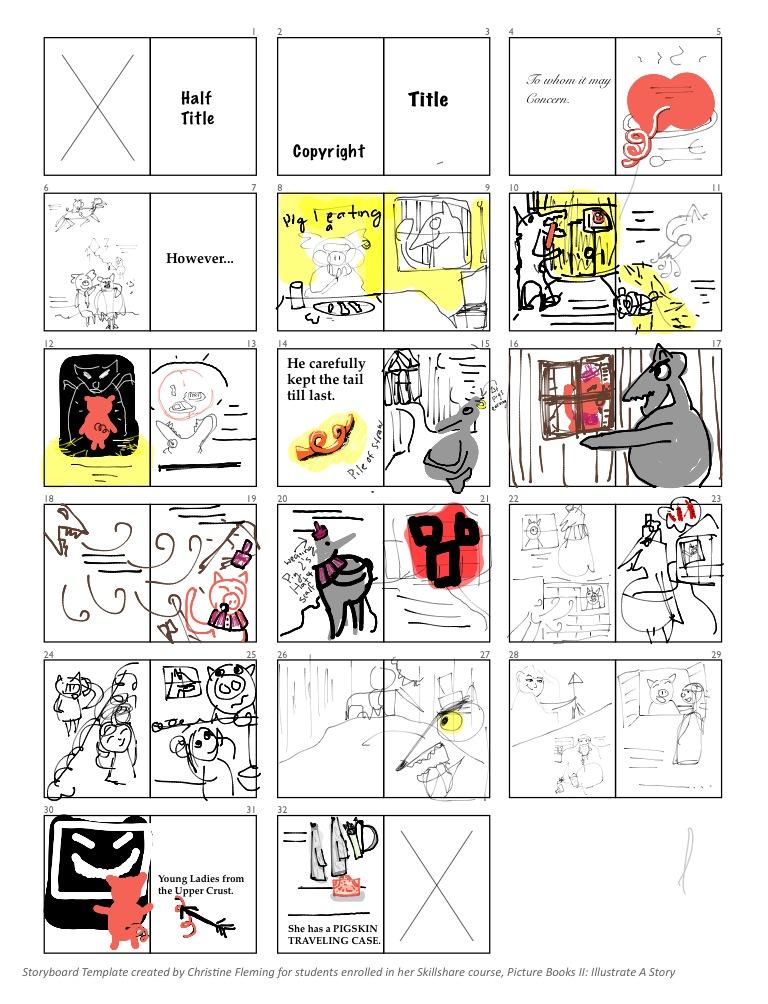 I changed one aspect of the story. The whole idea of the pistol is kinda...not children friendly to me, lol, so I changed it an arrow instead. I would draw red riding hood as an archer, instead of a gun yieldin gangsta. Lol, so I may or may not refine the sketches/thumbnails. I feel like I should, but I don't know yet. I may just go straight into finalizing the line art for them.

And I am back with a vengence!

I am super proud of these illustrations. I decided to go with my fat porker who loves bacon. I changed the design slightly to add room for teeth, makes him look extra threatening. But alas, we know his ending...

Anyway I chose three color options. The fourth was meant to be colored as well, but I couldn't really decide on a color. If you have any color ideas let me know! I know for the fourth one, I wanted it to be way different from the others (as I noticed they are in the pink to purple familty).

I liked the touch of gold teeth for the one in the middle; I find it odd and funny for a pig.

His character suggests an aggressive, but I imagine him as the hillbilly type. Too foolish to build his house out of brick because he is soooo cheap.

"Ain't nobody gonna tell me how ta' build my house!" I imagine him saying something like that.

I three of my favorite pigs and decided to do a turnaround for them. Still on the fence on whether I want to go back to the drawing board or not. But I have a feeling I am just going to go back to the really fat pig or the pig that was wearing the hat.

My next step is importing the turn arounds in photoshop and cleaning up the lines and slight design alterations. Hopefully then I can decide on my favorite porker. 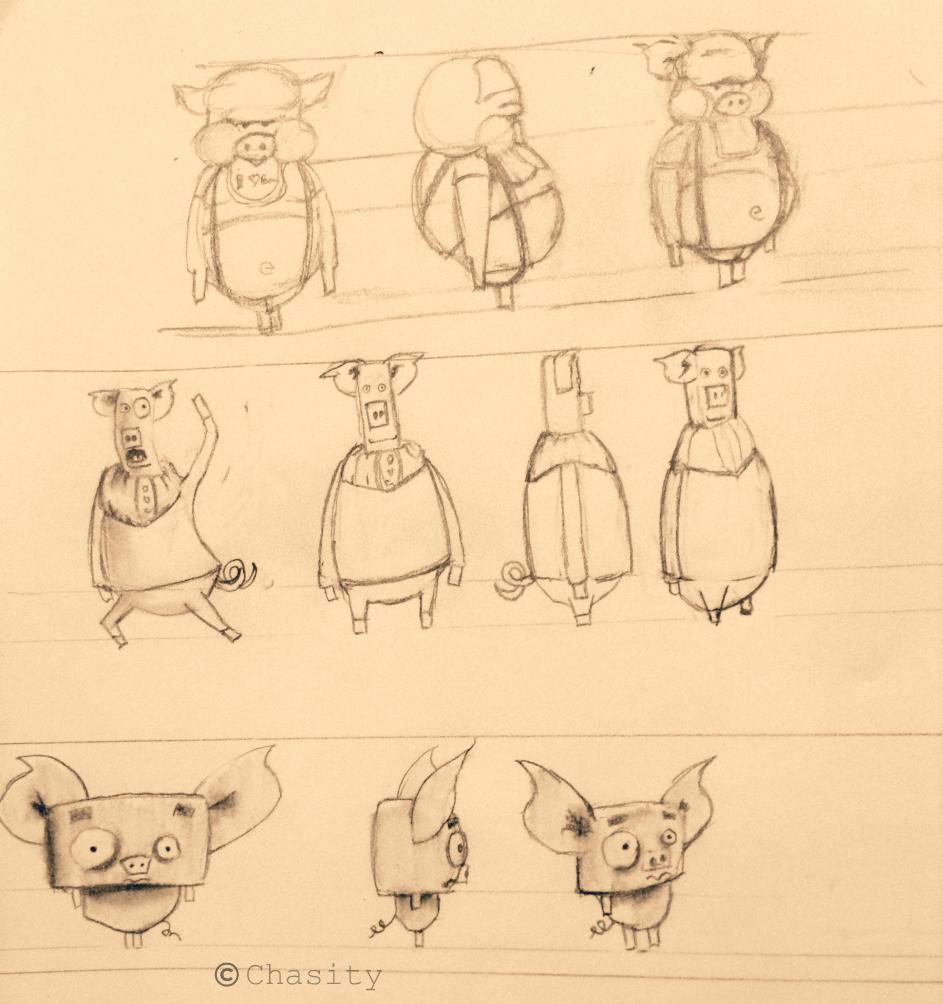 I was really excited to get started on the sketches for the pigs. I didn't decide which pig I was going to illustrate when I started the sketches, so I just created pigs with different shapes and proportions to see what kind of character or personality would arise.

I am going to choose which character to expand on after some more thought and rereading the story. 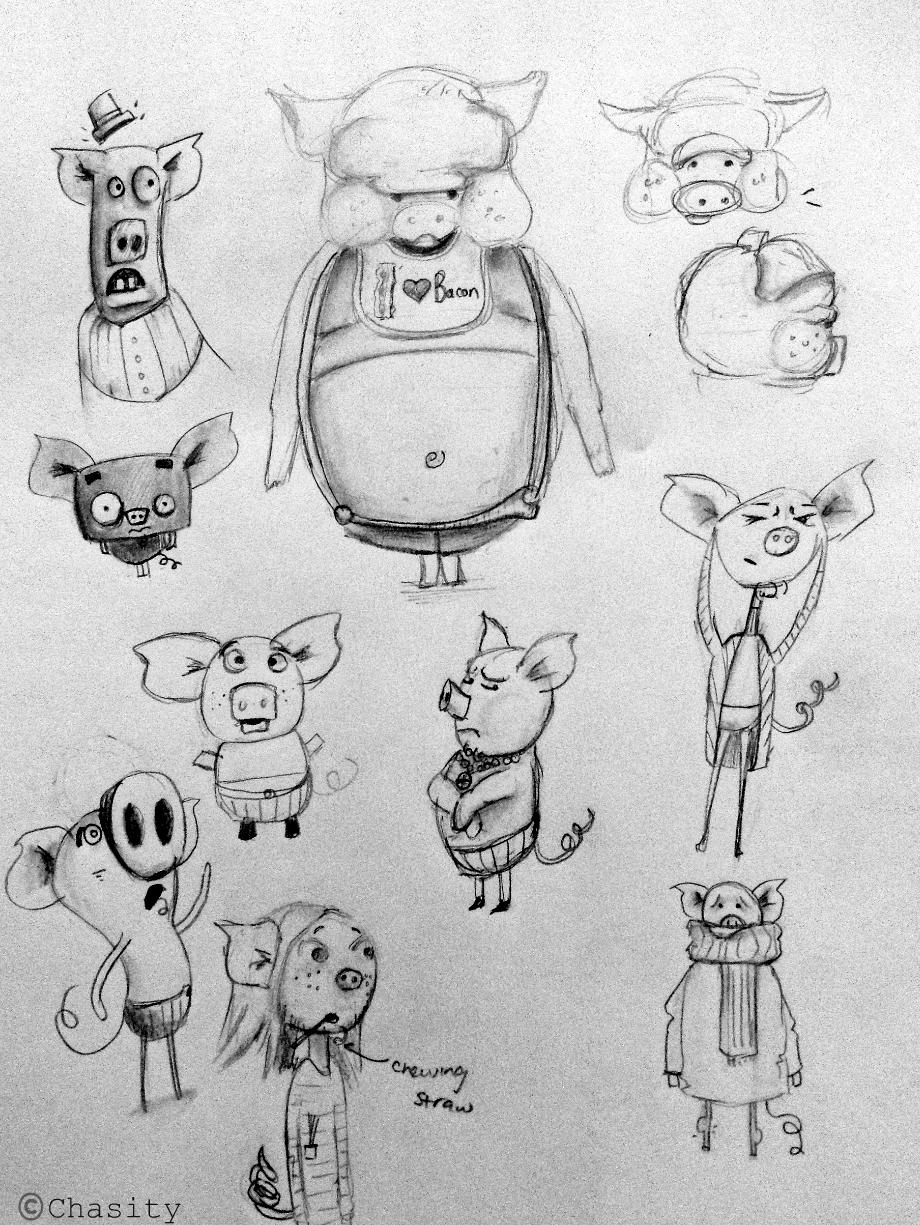 I am really excited about this class. I had more fun than I thought with the first assignment. The story is awesome with a killer ending. I loved the rhyming scheme; it really helped with deciding where the illustration would go and where the page breaks would be. 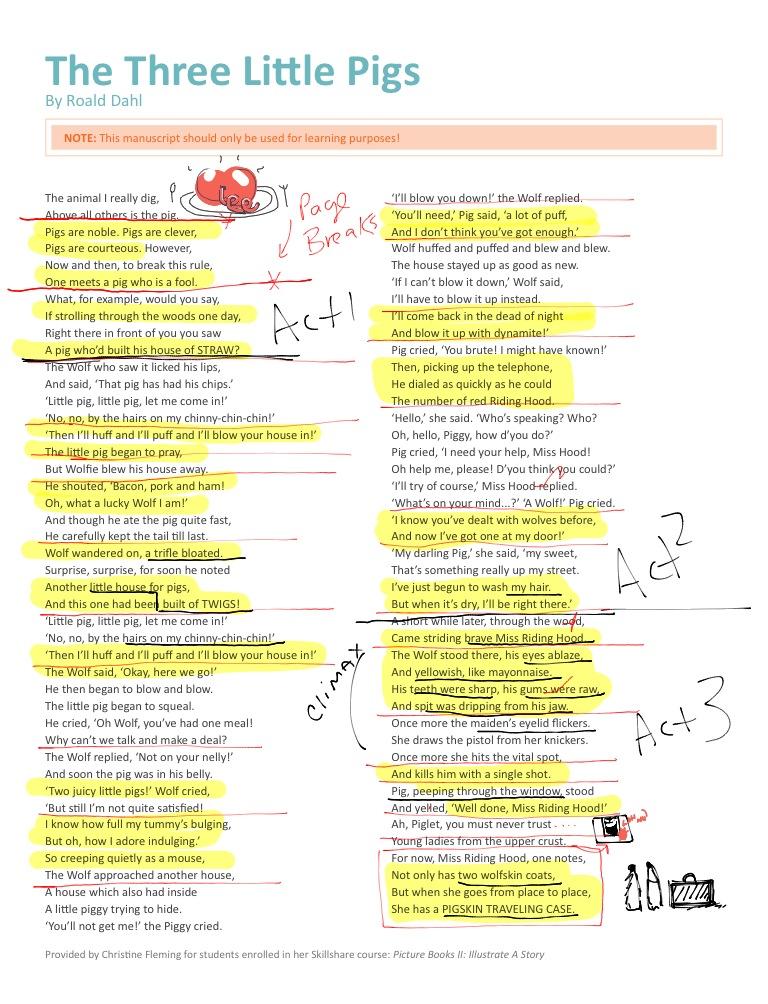 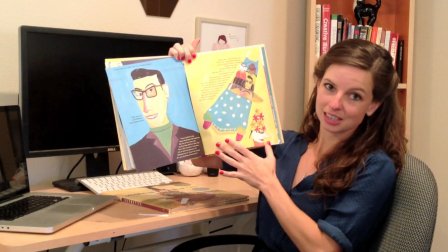