So, I learned from watching your amazing video that I'm missing a top window!  Which I think will improve my results massively, but I still wanted to share what I have put together so far and I will update with new pictures when I add the extra opening.

So I started with some foam board, some white industrial strength duct tape, some opaque drafting mylar, and some heavy nylon.

I cut two large (large, large) windows in the two side pieces of the foamboard.

And since I'm "one of those people", I covered the cut edges in the duct tape to make sure they were smooth and clean.

Here are both of the windows, all done.

Initially, I used some .75 rip-stop nylon for the side windows, but I didn't like how much light it blocked and I did some research and decided to go with the drafting mylar.  It's sturdy and diffuses like a dream.  The only problem is that it burnishes really easily on the matte side if things rub against it, but I figured out a way to solve that problem!  When I affixed the sheet to the panel, I made sure to lay the matte side DOWN, so that the thickness of the board would leave some space to protect the matte side of the mylar from things rubbing on it.  It might not seem like a lot, but...more on that in a minute!

I wanted my box to be SUPER portable, so it needed to fold up!  Therefore, we needed to add hinges.  This is why I went with the super industrial-grade duct tape.  I used my T-Square to make sure I left space between the side panel and the back panel so that the sheet would fold without pinching.   (Note: you'll need something thicker than a ruler when you do this...I had to redo it lol!)

Just another view of what I thought was enough room.  It wasn't.

THIS was enough room.  It might seem like too much, but you DO need the extra space.

I wanted to make sure there were no gaps, so I covered the joints with more tape.  This was another learning experience.  Don't use duct tape for this.  Use athletic tape or some sort of fabric tape that has a lot more give to it than duct tape.  I ended up going with the athletic tape and it's working out really well because it's got just enough stretch to it to be flexible, but is still sticky enough to stay stuck.  Of course, I also reinforced all the places where the athletic tape was joined to the foam board with the duct tape, but the joint itself was free (except for the duct-tape hinges in the previous step, which I might could have left out with this fabric-joint design, but hey, it's a learning experience).

I added some velcro strips to hold the whole thing closed and now it folds flat for much simpler transport.  There are also velcro strips that secure the whole thing together when it's open.  When I get the top window cut in (probably tomorrow), I'll take some more photos of that and show you some important things about how to attach the second side panel so that it closes flat, but the way this folks up, the mylar is totally protected.  The first side folks in and the thickness of the foamboard keeps it from touching the inside of the box, the second side folks in and the covers the first side and the thickness of THAT foamboard protects that mylar, and then the top of the box folks down and covers everything.

On the inside, I have two thick nylon sheets that are currently attached to the back panel, but I think I'm going to remove them and put up a strip of velcro instead and that way I can have a variety of materials with me to hang in the box depending on what the situation calls for.  I can have a white sheet, a black sheet, any color sheet I can think of, a greenscreen, or whatever.  I just need to attach a strip of iron-on velcro to the edge and I'm all set.

I also built the table stands for the lights out of some PVC pipe.  I probably need to make the bases a little bigger, because I upgraded the clamp lights to a larger size and they're a LITTLE too unstable.

This was my original light setup, but I wanted MORE MORE MORE light, so....

This is what I'm using right now.  I think all four of the front lights are barely pushing the same number of lumens that ONE of the side bulbs puts out, so I think if I can get that window cut into the top and I get another of those mega bulbs, I can ditch most of the extra clamp lights that are taking up all that space in front!

I also want to try to build a couple of softboxes that match up to the exact size of the windows in my box (especially the top one!) and then I can line them up flush and make sure the max amount of light is pushing in! 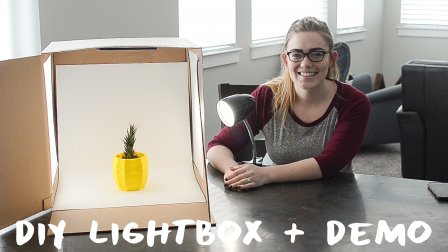