Version 2: (NEW updated project in 4 photos... I'm making progress towards 3 photos but for now I wanted to show the big picture of the home and show the layout)

** I picked the cover image because of the view outside the bedroom and for the light it shows coming in the room. It was a close race between it and the living room shot but for now bedroom with a view takes the hero shot! :-)

** NOTE: Here are three outliers that I want to share as options that I almost used instead of the hallway. I'm still on the fence about which one shows better. I'm also still deciding whether it's better to show the bedroom shot (from the cover image) or this one below with the lights on. The lights on certainly warms it up but the no lights has plenty of warmth with the larger window too.

(I got this in ONE RAW image! Very happy with this one plus didn't even have to photoshop the picture on the TV--woot go team flash! I clipped the side of the lamp in post when I straightened the image out but I will be more conscious of this in camera from now on) Had to share it! :-D

I'm still getting the hang of using external flash in lighting a room. Sometimes I feel like I'm arbitrarily adding light when I may or may not need to.

I made myself get used to one light (before adding a second flash) and tried playing with colored gels to balance mixed light sources but I'm not sure it worked well (I ended up doing a lot of the color balancing in PS/LR).

Before starting this project I was so used to just shooting rooms naturally lit with ceiling lights/lamps and daylight utilizing HDR processing (flash has always felt like a monster for me to really understand where I should bounce off of and often felt arbitrary). I will definitely keep practicing but I'm not sure I'm at the point where I can shoot with flash/bounce flash and have it come clean out of camera without the need to add HDR and other processing in post. I like that with it can almost eliminate the need for HDR in some situations (even though sometimes you use flash and bracket exposures to stitch together).

(16 mm) (I'm not sure what is going on with the level on my tripod. This shot being at 16mm also might be some of the reason for the curved/distortion and non-upright walls; I'm showing it because it is my best so far of the front door entry area of the home).

I have many different trials with the hallway entry shot but that one was tricky to get the flash to bounce off the right place to light both areas---I was probably too wide at 16mm there but I wanted to show how the hallway divided. I also tried using a gel on the flash to help mesh with the hallway lighting...that is a work in progress at least with this hall shot.

An issue I frequently ran into from room to room is which lights to turn on and which to leave off and utilize flash. I'm just used to turning on all the lights and letting the light fill the room with bracketed exposures. This was one challenge I tried to break down with willingness to play with flash.

(shot at 18 mm, is this too wide?) (also used bounce flash with a tungsten gel to try to balance daylight on bed)

Compositionally I did my best to focus on showing not just the rooms and areas of the home but layout and how each connects into one another. Should I keep shooting like this vs showing each room on its own without context of where it is (unless a specific feature calls to be showcased in an area)? 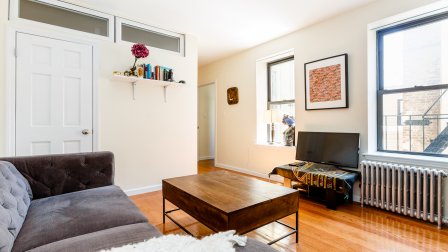 Interior Photography: How to Best Capture a Space
Alex Staniloff