this was my second try, I went out in the evening -one hour before sunset- in a nature preserve and unfortunately most of it was in the shadow, there were only some patches of sunlight here and there (before I went into a different direction but it was also in a forest/park area but it was the same problem only certain areas had some light). I don't know if I was there at the wrong time or if it was because of the location (this is hidden in the middle of the city and there are also lots of hills in the area so this is kind of in a valley). I noticed that everybody's elses projects are in wide open spaces and mostly by a lake or the ocean.

As you can see most of it is already in the shadow but there was a little bit of light in the distance which reflected in the water. It was taken with a Canon Rebel T5. I just upgraded my camera equipment after 10 years :). Settings are 1/50 sec and f/5.6. I wish the bridge would have been a little bit sharper, I probably needed to set the aperture higher. 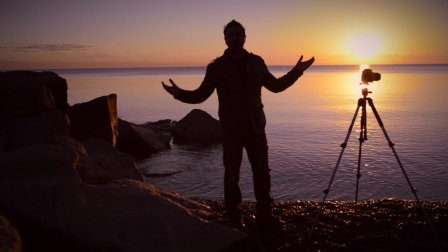