The thing I love best about this pattern, is it was one of those rare occasions when I didn't have a care in the world about what I was drawing, and this awesome pattern ended up coming out of it! I normally draw with pen in my sketchbook, but these sketches were done on newsprint with an old, dull sharpie marker, and a soppy Copic sketch brush marker that was bleeding through multiple sheets at a time. It was wonderful.

I liked that the pebble texture looked like it could be animal inspired or by brick walkways, and I loved the contrast of its unified style next to the loose florals.

These are the shapes I ended up filling in and exporting from Photoshop, then image traced in Illustrator to make them vector shapes. When I played around with my pattern idea, I learned:

1. My background layer is the leaves, and they're pretty independent of the other layers' layouts (try saying that five times fast..)

2. My flowers are the foreground and focal point, and their placement is dependent on where the pebbles are, and vice versa

3. The pebbles are the mid ground, and as I stated above, their placement is dependent on where the flowers are

Once I gathered this, I knew I'd have three four layers in Illustrator (one for the color ground), and would need to develop the mid and foregrounds simultaneously. Here's my final pattern:

You can bet on me playing with the color a million more times, but for the second I really love the heavier navy with the bold pops of gold and red. The dark accents in the back give me the sense of being in a garden or forest at night. Here are some others: (note: I'm a sucker for green and pink, pink and gold, and yellow with just about any other color)

Here are some that I liked when playing with blend modes. My pattern went into bad-Hawaiian-shirt-competitor mode really easily, so I had to be careful. The first two are lovely and soft, the third is retro in the best way, and the fourth is like a beach...holiday print? (This one borders on bad-Hawaiian-shirt competitor...)

I like that the pattern is set up almost like a chevron of rows of flowers, but not so rigid. 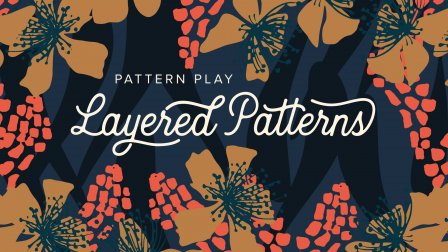