One of the wires I showed you in the videos is a lovely beaded wire that looks like lots of tiny silver balls soldered in a long row. It is a lovely wire to work with and produces beautiful rings, but I wanted to show you a couple of tips to make things go as smoothyl as possible.

Firstly, this is my workspace - not quite as tidy as you saw in the videos but a lot tidier than it can get!

And this is the wire I want to use. A friend has asked me to make her a set of three beaded wire rings that she can wear on her thumb. Using the ring sizers we worked out that she's a UK size W1/2 on her thumb, and as the wire is 1.5mm in diameter (at the thickest points) using the table I attached to the lessons I can see that I need 68.15mm. Remember that I need to round up to 69mm as no-one can cut to a fraction of a millimeter!

This is right in the middle of a silver ball. I want to cut in between silver balls so that my join is neat and hidden between two silver balls, so I'm going to cut the wire slightly shorter. This will mean that the rings will turn out a little too small, but as you've see it's easy to enlarge them. Better that than them being a little too big and falling off!

I've cut the first wire and I'll use this one to work out the length for the other two.

....and shaped for soldering.

I forgot to take a photo of them being soldered, but you've seen that stage on the videos, so this is a lovely picture of the rings sitting in the pickle! I sometimes put small things in a metal-free sieve before putting them in the pickle as it makes it easier to get them back out again!

I've shaped the rings around the triblet. This triblet is marked with the Wheatsheaf (UK) ring sizing gauge, and as you can see the rings are a whole UK size too small. It only takes a couple of millimeters to change a whole size. I'll hammer them down the triblet with a nylon hammer to enlarge them. It's best to use an unmarked triblet for the enlarging as the marks scribed into the Wheatsheaf triblet may mark the wire. Enlarge a little at a time, checking often so that you don't accidentally make them too big. The balls will flatten a tiny bit on the inside of the rings but it won't be obvious and won't be seen at all when the rings are worn. 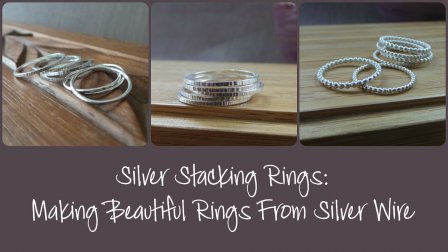