As my inspiration, I am choosing to use At the Core done by Paul Klee in 1935.

Klee believed in movement and action as a good things in paintings. So my key words are:

For music choices, Klee liked to listen to Mozart and Bach and was a violinist. I had started off thinking that I would listen to Mozart, Bach, and some violin soloists. But then I remembered a musician that I love listening to when I need to focus but would like music in the background. So for this project, I'll be listening to the albums of Zoe Keating - a very talented cellist.

I will be using a mix of acrylic and gouache paints.

My colors will be a deep red, yellow, white, and possibly bits of blue for contrast.

Below are some thumbnails that I made using colored pencils that were based on my inspiration. After running through these thumbnails, I've decided to go with just two colors - orange and white.

I changed things around at the last minute. I decided to go with watercolors instead of acrylic or gouache. Below is my background with the design elements drawn in.

This is the final project after all the layers were painted in with salt added in each layer for texture.

I think I'm going to go back and thicken the line work though...

I decided to go back with a watercolor marker to thicken the line work and give a more graphic feeling.

The first one was done with an orange base with different mixtures of orange and write for different sections. These were loosely brushed on, then some of the paint pulled off by dabbing it with a paper towel to give it more texture. It was finished with a fine line marker over the lines

I also went with the advice to try sponging the colors on, but it felt awkward and hard to control. A lot of colors overlapped going where I didn't want them to go. I finished it off with a fine line marker again over the lines and called it done. 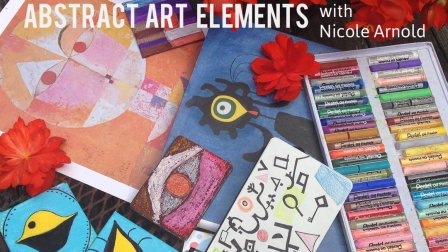