In my own paintings, I try very hard to give a sense of depth, I tend to avoid muddy tones, and even my depictions of interiors tend to be brighter... so I charged hard in the other direction and gave cubism a shot! I can actually relate to the desire to capture the passage of time into one image though and that's a start.

I've never been a huge fan of Picasso, but, obviously I've borrowed heavily from Les Desmoiselles d'Avignon for my own painting. My favourite reference model hit a few "awkward, tense poses", I'll add one of those in lieu of a picture of the sketch on canvas as I could not get a good picture of that to save my life.

I actually only sketched in the figures in the middle, the background was a little more improvised while I played with technique.

I'm still not sold on such a muted palette but it was relaxing to not get locked into matching a healthy human skin tone. I don't know that I was completely successful in flattening out the image, but there's definitely less definition between the subjects and the background than I usually go for and that was an interesting thing to explore. And cubist faces completely elude me!

Thank you for the interesting class, I may actually play with cubism again soon and I'm definitely going to be trying out a few more of the styles that I've avoided! 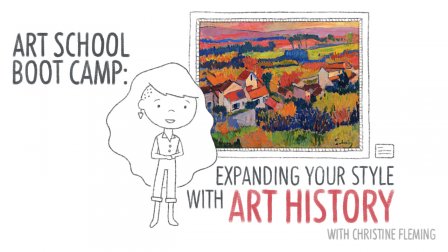