I've seen ads for this hair, nail, and skin supplement on the subway and thought it could use some improvement. The marketing for the product has a clinical feel with celebrity endorsement.

The first thing I noted was the large holes between the rf, the ct, and the ti, The logo type feels too open and disconnected. The repeating end strokes on the til only emphasize the uneven spacing.

The P, f, and lowercase l don't quite look like they're from the same font as the rest.

The first thing I thought to do was to see how it would look if the spacing was very snug to see if that would help the overall look. The cross bars on the F and T are lower than the x-height and the weight of the swashes on the P and f are uneven. They look thinner that the rest of the letters in the logo.

The C looked too wide and the counter left a large space. I slimmed that down a little to feel a little more like the E.

I took away the end strokes on the TIL and replaced it with the angled end of the R. Once that was done, I moved the cross bars for the F  and T to sit above the x-height. The F still felt too swashy so that underwent a makeover. It got the same angled end as the R, T, I, & L and the beginning stroke took the rounded stroke of the C.

The hardest letter was the P. I felt it needed more heft than it had. The bowl of the P felt incongruous with the other shapes in the logo-- notably the eye in the E. I took that shape and tried to create a similar feel in an uppercase P. I kept the swashy tail and the changed up the head serif to the same on the R.

This is the final with the same tight kerning. In the light of day, ugh. This needs so much work that I'm a little embarrassed to put this up! A deadline is a deadline and even if I'd had to retype this since Mike Hat, my cat, walked all over the keyboard and erased my commentary.

The P is wonky and I need to look at the angles again. Everything needs a less sleepy eye again. There's a wonkiness that bothers me and I understand it needs more work.

I opened up the letterspacing and applied the purple color to match the original but I think I'll give this a few days again before looking at it again to see if I can make more adjustments. 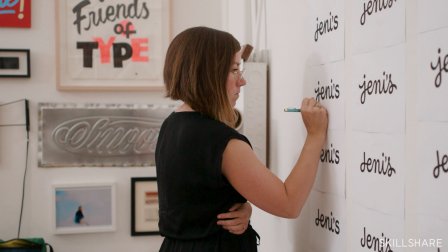