Thanks for this class!! I hope this made you a little bit proud ;)

My first interaction with gangster rap was with NWA. Niggas with Attitude. I was 13. I was in Richmond for the summer with my grandparents and I begged my cousin to let me ride with him and his homeboy. Straight Outta Compton was the music of the day. I was shocked and turned up at the same time. He made me promise not to tell my mom. I fell in love with “gangsters" and everything “gangster" related that day. I put gangster in quotes because according to Merriam,  gangster means  "a member of a group of violent criminals”.  Gangster does not mean that to me in relation to music. I became a nigga with attitude that day. This revelation significantly impacted my taste in music and opened up a whole new world to my mainly "white america" experience. It was this day I saw "race",  something I never conceptualized prior to that. People were just people before NWA in my world.   But this might be because I am a "light damn near white" black person. I felt like I was a real black person that day. I could be accepted now  by my darker counterparts now because I have NWA in my back pocket. This image of easy E ( one of my all time favorite people) says so much. It shows a ‘nigga’ redefining what ‘niggas' are allowed and can do.  From my experience, skateboarding has always been a white thing. Cool, hippie white boys doing ollie’s and shit. Summer games on TV only showed white boys dominating the skate ramps. I don’t think I ever saw a black person win or even be in a skate competition. So it’s a bit mind boggling for me to see this image, of one the most gangster rappers we have ever known, in what looks like the late 80s/early 90s, hitting a move on a skateboard. I don’t know if Easy E was offered deals with skate companies back then, but I will assume no. Because even to this day, I still don’t see any popular black skaters being recognized. There is still only a speckle of melanin on the X games. Are black people really so hard wired to not see that money is every where to get in many arenas? Its not just in football and basketball. Why are there not more black owned skate companies? I had to google "black owned skate company". Found one. Black skaters, found ten. Well, the most popular skaters. Ten ain’t enough. Millions of black people and TEN skaters pop up. Something isn’t right. I think now more than ever there should be at least one ‘nigga’ on a billboard, or a skateboard crew,  skateboarding. Not just found in a google search. Maybe Black America would be different if we saw more of ourselves doing “white” people things. Maybe more hope would be instilled in being something instead of believing the only way out the hood is to be a rapper or getting drafted ( FYI, its like a 1% chance in that happening,but people don’t hear me).  Why is it so hard to find black skaters ?  Or maybe I should be asking why aren’t any black people skateboarding? Is it not cool enough? Why isn’t skateboarding ‘cool’ in black america?  So cool that the X games have more blacks than whites. Or at least an equal amount.  We really need to redefine what is cool. Stop shaming black kids when they do something uncommon to the black culture. Still shoving blacks into boxes and nailing them shut. Have you disengaged from your race because you are doing something considered “white”?  Who even defined what is considered 'white people shit'?  Unfortunately, it seems that there are still HUGE markets essentially untouched by black amercia. This is a very complex 'way of the world' that I still don't quite understand. I never really saw a surge of skateboarding while black ( SWB) until Pharrel made it ‘cool’. Then Lil’ Wayne. Wiz Khalifa. All of which have heavy white following. That in and of itself says a lot.   I say all this to say, Easy E, you said a lot without saying anything. You said a lot by redefining what ‘niggas’ can do. One may never need to quote you verbatim or listen to your albums in full. Just the mention of your name says enough. Maybe if this photo was a billboard things would be different. 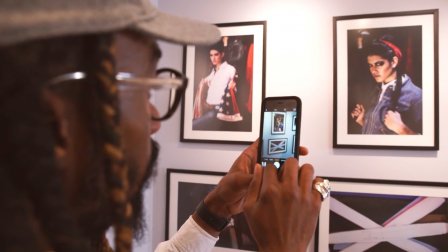 Essays on Insta: How to Write for the Gram
Yahdon Israel