Don't be scared using a pen...

After the 'Sketch Loosly in Pen' excercises - I had a quick look around for a simple first object to sketch. I found a bag of cashews and they are quite interesting, none of them is the same, some are plumb, some are broken and I did a series of small sketches. Most were horrible - but I like this one ..

I am doing 'Sketchbook Magic' in parallel - it is about creating daily something in your sketch book - to establish a new habit and avoid all excuses you create for yourself to 'not make art'. It is about overcoming fear of not being good enough and masking that by 'not having the right tools, time, space, inspiration and 'whatever'. I am trying to deal with all that and also to improve my drawing with natural media. So I am doing a lot of 'simple' excercises. Today I share my 'marbles' (it is lesson 3 from Mark Kistler's - you can draw in 30 days). I did it first in pencil - and then pushed some boundaries and attempted it in pen.

I have plenty of critique on this myself, but I also like it.. I have redrawn the pencil sketch I think four times, not satisfied with the perspective, the placement etc.. then I did it in a 'once off' pen sketch and yes far from perfect.. but there is no going back. Anyone still will see this as a set of balls (marbles, pool balls or something). Small confession.. I cant draw straight lines still.. I must have done hundreds of lines in practise but they still go out of alignment.. see how I used an eraser / knife to try and hide that.

Yet another simple one. Boxes enough around the house.. and lesson 4 in the MK course is .. draw a box. The bonus lesson turns them into pressies.... and I did this excercise with pen. Got a long way to go with perspective..

Still waiting for the watercolours to arrive... no idea where they are hold up but now it is certain that it won't be before the weekend.. The good news is that the Pigma Micron pens arrived so I have more pens to play with. I also have a handful of aquarelle pencils (8 to be precise) and I decided to make the colour chart with those. It turned out pretty good actually and maybe I should just make the leap and use that whilst I wait for the watercolours to come in.

So .. another 'simple' excercise from the MK class - an open box. These drawings are really simplistic and are very suitable to do shading. I also like the cartoony style of things. My boss sent me an xmas hamper, and the empty box makes the greatest gift for my cats. The box does not exactly look like this but it is life-like enough..

Then I attempted something more serious.. and I got kinda stuck (lost) in the details.. or rather .. I should have stopped a whole lot earlier. I will attempt this one again (and probably again and again..)..
I got this beautiful oil bottle, it looks like it came straight from a lab and as a geek/nerd/science girl it very much appealed to me when I first saw it on the shelves of a large cooking shop. I had to have it!

This is a picture of the real thing:

I took the picture standing and tried to avoid desk clutter to appear in it. It is glass so transparent. I like the different colours of the oil, the moon shaped shading it throws on the desk, the actually lighter yellow colour where it should be 'grounded' and the zillion colours of yellow/green in the bottle itself.

Well.. this one was over my head but I will share the attempt anyways.. I sketched it sitting so the viewpoint is a bit different.

So.. I thought I try another real thing.. again from the kitchen.. it is a my bamboo utensil holder. I love my wooden spoons and spatulas...

I also am struggling with 'what to shade' and the balance of 'no need to add all details'. I think it is a bit better than yesterdays project but it still feels I am so far of from something 'presentable'.

Today I tried something a bit simpler. Still struggling with shading. I think it comes down to how much detail you want in the sketch. I read up a bit more on techniques to find value. I squinted a lot trying to work out dark and light, but with my not so great eye-sight I am not really sure what I am supposed to see either. Todays subject.. a small brown paper gift bag.

Yet another kitchen item. I love food and cooking so there is quite a bit to go through. I think I may make a few more studies of this one tho. Whilst cross hatching I thought perhaps the contour line for the top at the front may be dropped completely and just done with the hatching, a hint of the rounding is given by the very first row of hatching in that area. I still am a bit confused into what direction to go with the hatching and where to shade and not to. And maybe I should take a picture and then sketch from that as my viewpoint between the sketch and the photo is slightly different. But you'll get the idea.

Today I will find some time to do some practice with density to create more values. Still waiting for the watercolours.. hope they didnt get lost in transit.

I used the picture above to make another sketch of the mortar and pestle.  When I thought about it all, I know I drew contour lines because 'I know that is where an edge is', instead of trying to look and omit lines where they fade in their environment. I tried to pay more attention to the values and I think my attempt is better than yesterday's.

Still a long way to go for consistent hatching...

I bet y'all thought I went away.. I did but only to experiment a bit with watercolours. They finally arrived and I made a new colour chart, and completed also the technique lesson. And then I went away and did a very fun Skillshare class with Ana Victory Calderon - Modern Watercolour Techniques and played with the new watercolours and some other household materials. I am also following another (off-site) pen illustration course to learn more techniques and see more examples. I am still sketching every day things and will post more of them in the coming days.

It's been a while since the last update - never fear.. still here (hey.. I am a poet and I didnt know it). I have been experimenting a lot with simple 'value scales' and some excercises with pen and watercolour. Most of those were very 'illustrative' and not directly cool to share - but I post an example:

I also played a lot with 'blind contours' as well as 'contour drawings'. The products of most of those excercises better stay buried forever but they are cool and great warm ups. If you never have done blind contours - find more about it using your favourite search engine - it is really great to improve 'seeing'. Obviously lots of them will be 'way off the mark' but that is not the purpose of this exercise. It still was cool to loosly doodle in the actual cloves.

Garlic is such an interesting object to study and sketch. Prior to some contour drawings, so basically without 'seeing' and just drawing my symbol for garlic..

Then trying to be a bit more deliberate and really catch what is going on..

And some more.. notice how I reuse cheap paper.. I just sketched over my many contour drawings and then tried to erase the lines in the back whilst the paper was still wet... still like the sketches.

And some time later again..

I have been experimenting a bit with pen, watercolours and ink washes. I am still learning and still struggling in where to hatch and where not to, but it is improving. I now am 8 weeks into drawing / doodling / sketching 'something' daily. Some experiments fail and sometimes they work out well. I am happy that sofar I have 'done' something everyday. I do not have 'time' every day, but I use even a spare 5 minutes when I have them.

The above sketch shows a few of my breakfast / desert things. I used sumi-ink washes to create an underpaint effect and then applied some sparse watercolours to make it less dull. The jar on the right is supposed to be my sugar jar and I think that one was messed up from the start - the hatching didnt improve things - but this is my first sketch using the underpaint effect so I wanted to share it anyways.

I am not posting very frequently here - but I am still going! I started another class called Sketchbook Skool (and they claim they can spell ..) which is about beginning an art habit (like Ria's Sketchbook Magic). The good thing is that we are encouraged to sketch with pen. My first assignment:

It is an unassuming gift bag that holds a lot of cards, letters and invitations (physical mail) that I have received over the years. The textured wash is done with water colour, the lettering is done with a dip pen.

And some time later again...

I am still drawing and sketching daily. I make cartoony things and try to do still lifes equally. I am still struggling with watercolours but slowly getting better. And I still like to make the first marks in pencil, but more to ensure it will fit all on my page than 'what to draw'.

And this week's not so fresh veggies..

And again.. some time later...

This is the result my latest project in sketchbookschool. As it is a drawing from life project - I thought it fit to also post it here. Yes still working though daily sketches. This is done with pen only, then some watercolour and finally some colour pencil texturing. 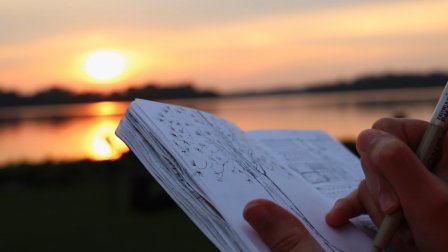