I wanted to create something with a Christmassy feel to it that I could use for a card, so I looked for things like snowy landscapes, forests, houses and woodland creatures and foliage.

I chose the colours later and then added them to my moodboard afterwards. I also had a new brush bundle to try out so I decided I would add a fair bit of texture to my icons to add interest. It was nice to play!!

I used fairly rough sketches, but they were enough to use as a guide.

I went for a couple of different colourways to see what the effect was like - I think the purple is my favourite :) - the blue is an older version, I went back and fiddled with it, so the purple is the final one.

I initially had some difficulty translating it into a swatch to test it... until I realised that the background and the bottom square had to be on the same layer, and then it worked!

Thank you for a lovely class Mel, I really enjoyed this one, and am feeling accomplished!! I will definitely have a go at more...

Now to go and fix the fox's ear... always something that gets missed until printing! :D 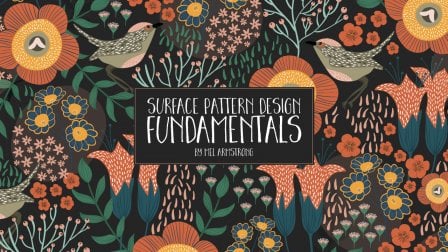