I am initially going to be working on a simple times table app, to teach and calculate times tables for young children. This is planned on the basis that a calculator isn't attractive or user friendly enough to do be used by or appeal to younger kids.

It would involve one main editable screen, on which the user (or parent, or teacher) can program what number they want to calculate times tables of, and several other buttons which again can be programmed to be multiples of that number. A larger display area would calculate the totals for the user. 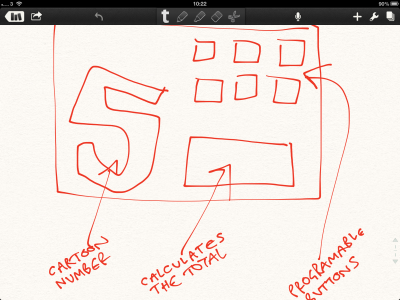 ... although I am still working out what this will look like, I realise that I need a screen to display the app and a screen for the user to program button functions.

An extension to this simple app would be a testing facility where a user could take a quick test which would mark itself.

Any help or feedback gratefully received