As an Atlas Corps fellow at RESULTS in Washington, DC, Mary worked with the development and Microfinance teams, mobilized funds for projects, and finalized reports for women’s Microfinance projects in India and Bangladesh. She also wrote blogs on different events she attended including RESULTS conferences and meetings. Before coming to RESULTS, Mary worked for 6 years in Sudan and South Sudan as a journalist and women’s rights advocate.

2010  Bachelor of Arts in Psychology and Mass Communication

-Tell Your Story True: Memoir Writing Workshop with Marita Golden in Washington, DC from April 19- May 18 2016.

- Good report- Writing and translation skills from English to Arabic and vice versa.

- Working in the start a chapter of youth for human rights in South Sudan.

Is a visual media which cover African news in Washington, DC

-An Arabic language news publication with “the Niles” a project by Media in cooperation - funded by the German Ministry of Foreign Affairs.
- Write news, do interviews and translates in South Sudan.

-Translated human resource documents from Chinese to Arabic and Arabic to English.

-Fellow up with finance invoices with projects contractors and the Ministry of Petroleum.

-Assisted guest interviews in the studio

-Interpreted phone interviews from Arabic to English for program staff

-Engaged with women activists by offering civics trainings in the community.

-Encouraged women to participate in public life and advocated for women’s rights.

-Translated newspaper content from Arabic to English and versa.

-Provided daily coverage and follow up on the South Sudanese referendum in 2011.

-Researched and comparatively analysed South Sudan before and after independence

-Provided interpreting and translation services from Arabic to English.

-Implemented peace-building projects for communities with ethnic and tribal tensions. 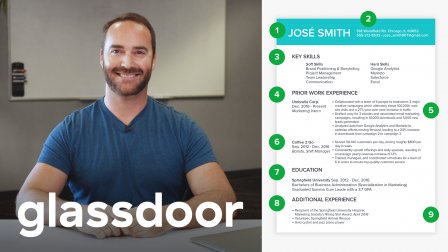 How to Get a Job: A Step-by-Step Guide | Learn with Glassdoor
Scott Dobroski