here comes the story of the hurricane

I played around with the visual effects a little in this final version, utilising the 'Gaussian Blur' feature in Adobe Illustrator to add a sense of less solidity to the individual states in the map (giving the impression that they might blow away in a stiff breeze) and to the comment highlight boxes and the indicator arrows.  I also added a NASA GOES map as a background to add visual drama.  I might have gone too far with this - hope it doesn't affect readability.

I also changed the title to reflect the intent of the infographic, in 'telling the story' behind some of the hurricane impacts on each affected state.  Being a big Bob Dylan fan, I can't believe I didn't think of this title sooner! 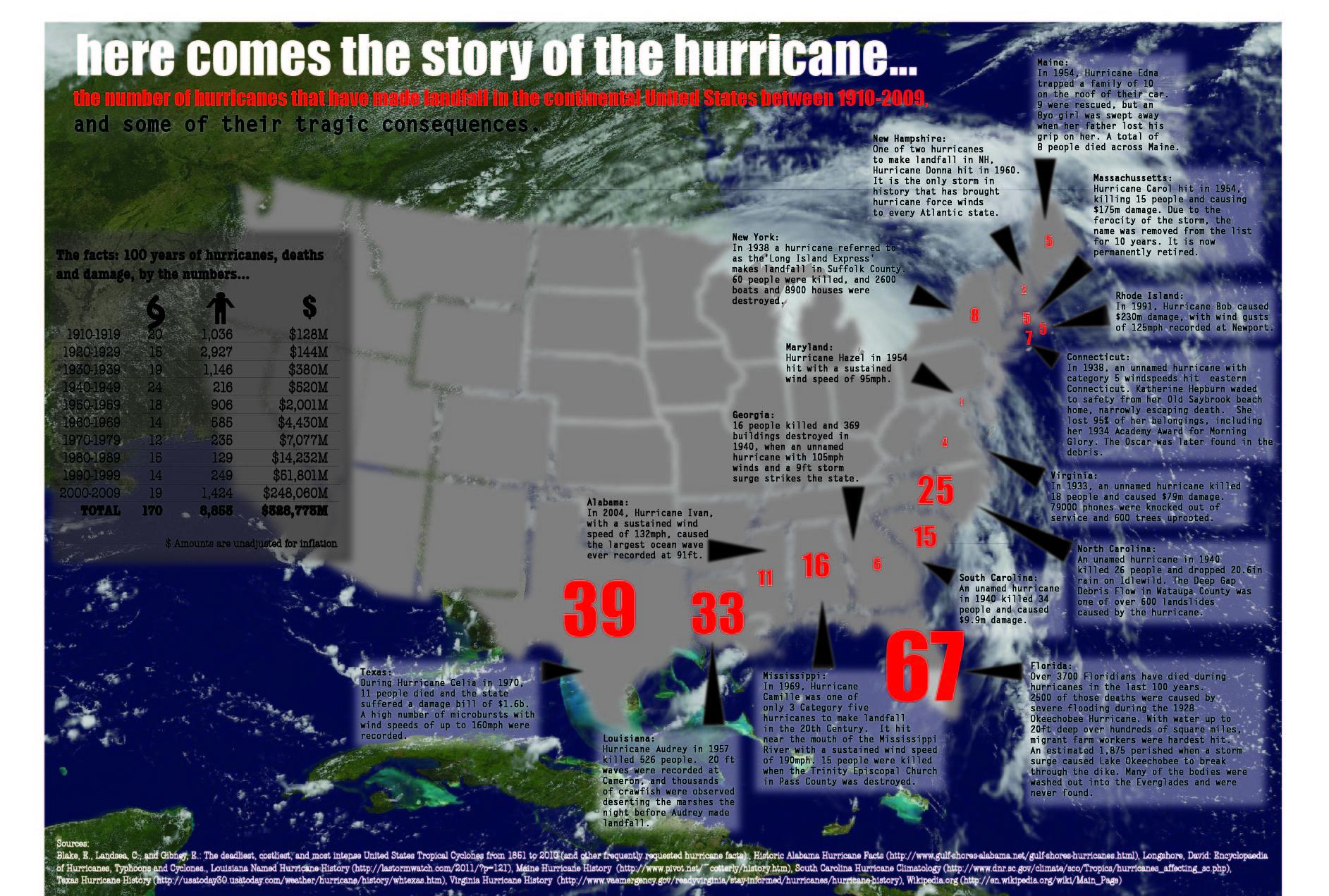 Final Draft!  Included big picture numbers, and individual stories about a hurricane in each state...

I wanted to keep the map and graphics as clean as possible to tell the story about hurricane statistics, and the all important individual stories of impacts of hurricanes on each state, regardless of frequency or amount of damage.  After all, for those people affected, I'm sure they don't care if it's a 1 in 100 year event.  The impact on individuals/families/towns is always significant.

It was my first time using a 'serious' graphics program (Adobe Illustrator-free trial) and I found it ok to use, with quite a bit of searching the help database and the web when I got stuck.  Had the most problem with the icons/graphics, so I wasn't able to be too illustrative...

I hope you guys can give me some feedback on this - I reckon it's an infographic I'd be interested to delve into if I came across it, as it gives me information from the highest levels, down to some personal state-based hurricane stories that bring the experiences to life. 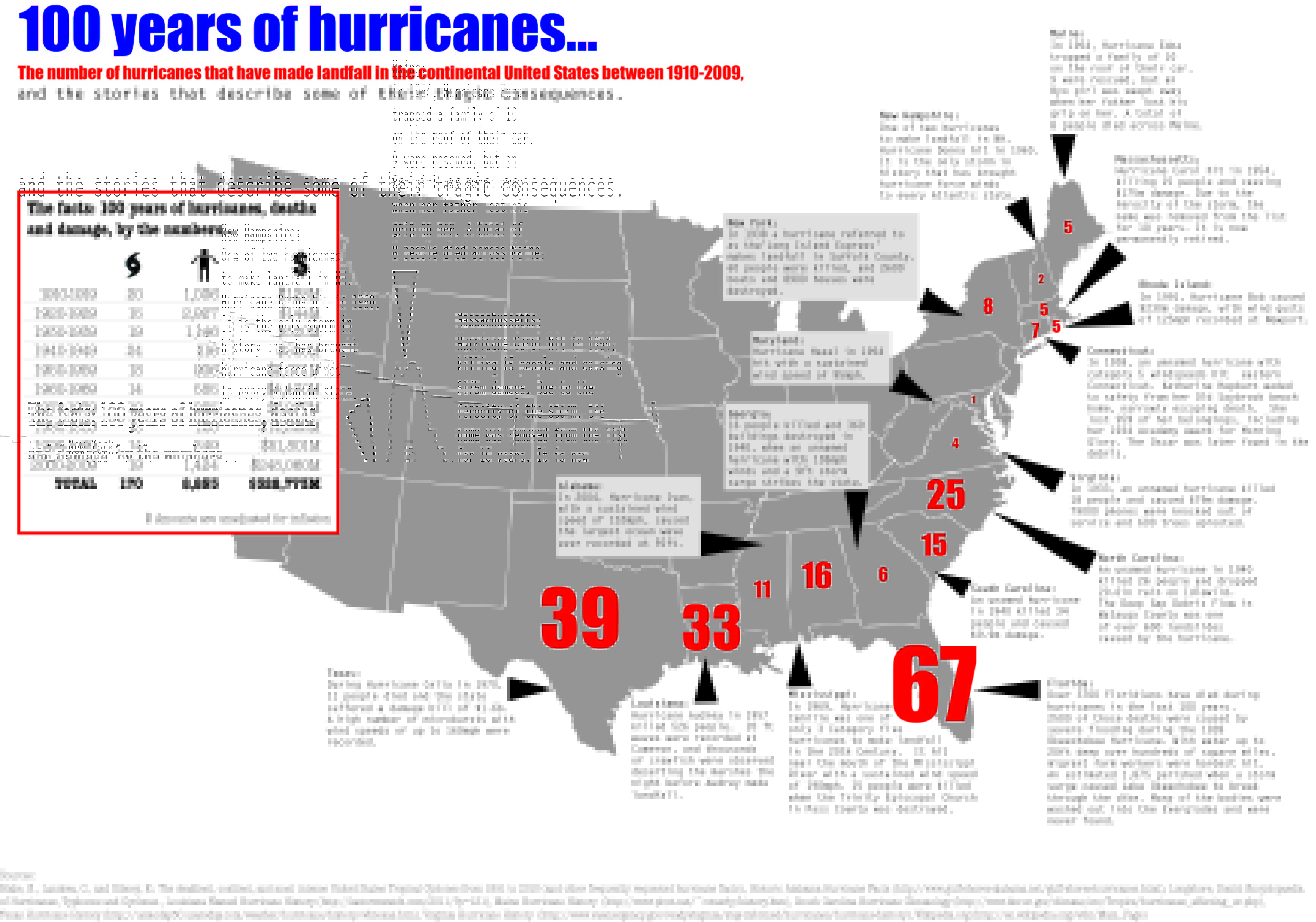 Here is my updated 'sketch' - done in a free trial of Adobe Illustrator.

I have used 100 years worth of of data set 1, focusing only on hurricanes that made landfall between 1910 and 2008 (with 2009 & 2010 quickly sourced from hurricane season summaries from wikipedia.org)

It's pretty straigtforward at the moment - am still working out whether to include the historically based likelihoods of a hurricane strike in any given year, and maybe an interesting mini-story about the hurricanes that have impacted each state.

Hope everyone is having as much fun as I am!  The number crunching was interesting - being an Aussie, I had to refer to multiple sources to make sure I had the state abbreviations and map locations right... I'm learning a lot as I go!!! 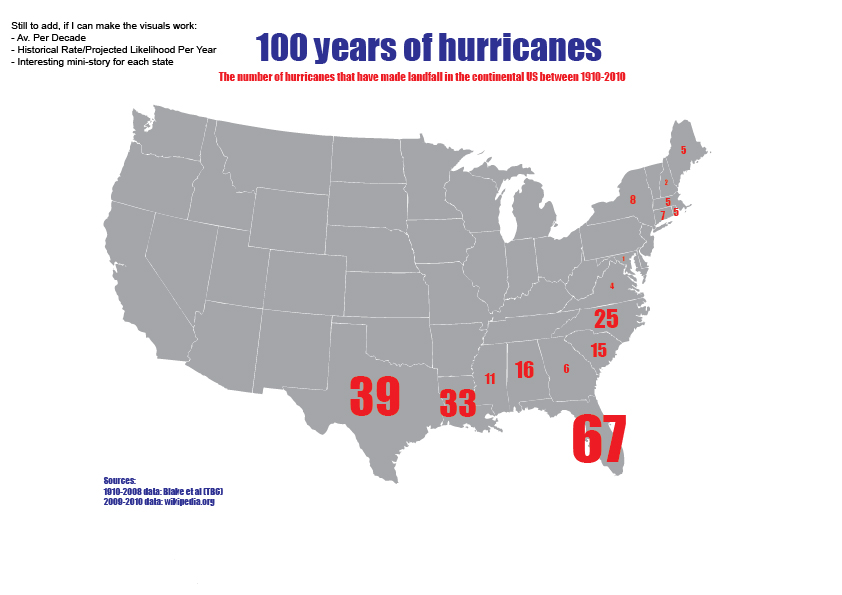 I have decided to do a straight 'history of hurricanes' infographic, representing as a baseline, the straight data on hurricanes that have made landfall.

I think I will also add some interesting data about a selection of the hurricanes, to give them context or to highlight some reportable information that might help 'tell the story'.

This is my plan anyway.  Trying not to be too ambitious as it's my first time!