I get two magazines delivered to my house every month and I have no idea why, so rather than toss them in the recycling bin I decided to start making collages. It became a sort of art therapy over the last two years in lockdown; I'd pick out the images and words that spoke to me and make sense of what I was feeling by creating something out of it.

Until now, I only used magazine cutouts and a little bit of painting, so adding 3D elements was fun (and challenging, I need better glue). I painted the face with water color instead of constructing it so that it had a better chance of actually looking like the subject-- my cat, who recently passed-- although I did give her cooler eyes for the aesthetic. She was not a particularly militant cat but I thought the uniform (stolen from some fancy couture ad in Vogue) made her look suitably regal.

to onyx, thanks for growing up with me. 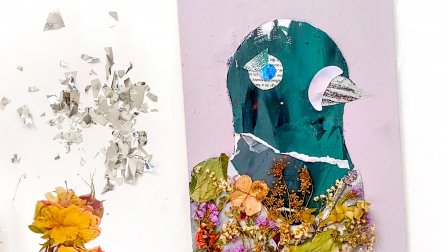