The Prime Tower was with "only" 126m high the highest building in Switzerland till 2015. It's surround by new and old structures, rests from the old industrial area in Zürich. I took this picture as look up. I like the colors, the different kind of square and the different perspective of this bunch of buildings. The plants coming from the 3rd balcony is kind of lost in this cubic world.

In the Prime Tower there is a restaurant called Clouds. In the small square of the bottom of the tower there are often teenies skateboarding. This time they were trying to jump with their skates. I decided to take a reflection of them flying in the mirror saying clouds - like a bird flies in clouds.

At the moment, the Harbdbrücke (bridge and railways station) in the industrial area is under construction. I was driving by with my bicycle on my way home when I heared the great voice of this guy playing guitar. It was really a great moment and decided to immortalize. People were walking or driving bicycle around at different speed, trying to get their train at this railways station or going home. I get this bicycle in same time as this group of people walking by and Yury is singing with passion, even if people are not showing interest.

I wanted to play with the lights in club. And that day the dj had a great shirt with this big eye wearing a hat. In this portrait, it's almost if he's lightening his mix table to let the eye looking clearly at it. 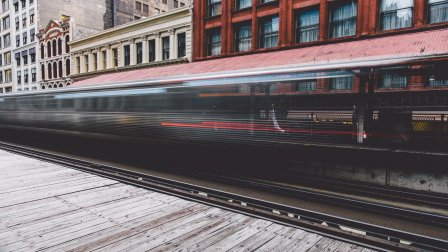 Street Photography: Capture the Life of Your City
trashhand