Youth Lagoon at Metro in Chicago 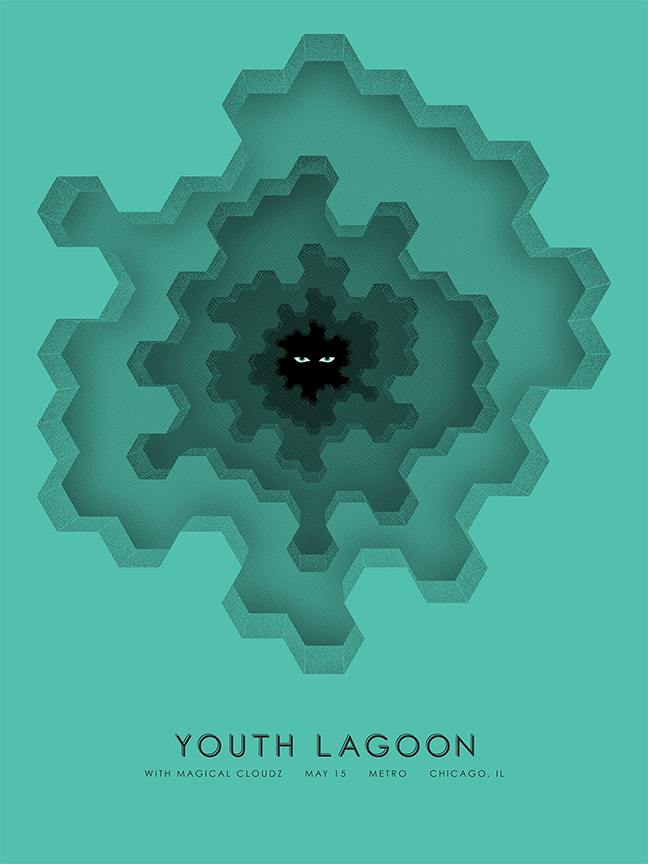 2/28
I've been exploring some halftones. I'm considering the outermost level pretty close to done. This is one color (black) on a background (paper). I've been kicking around some type ideas but clearly haven't commited to anything. Will try to finish this up tomorrow. 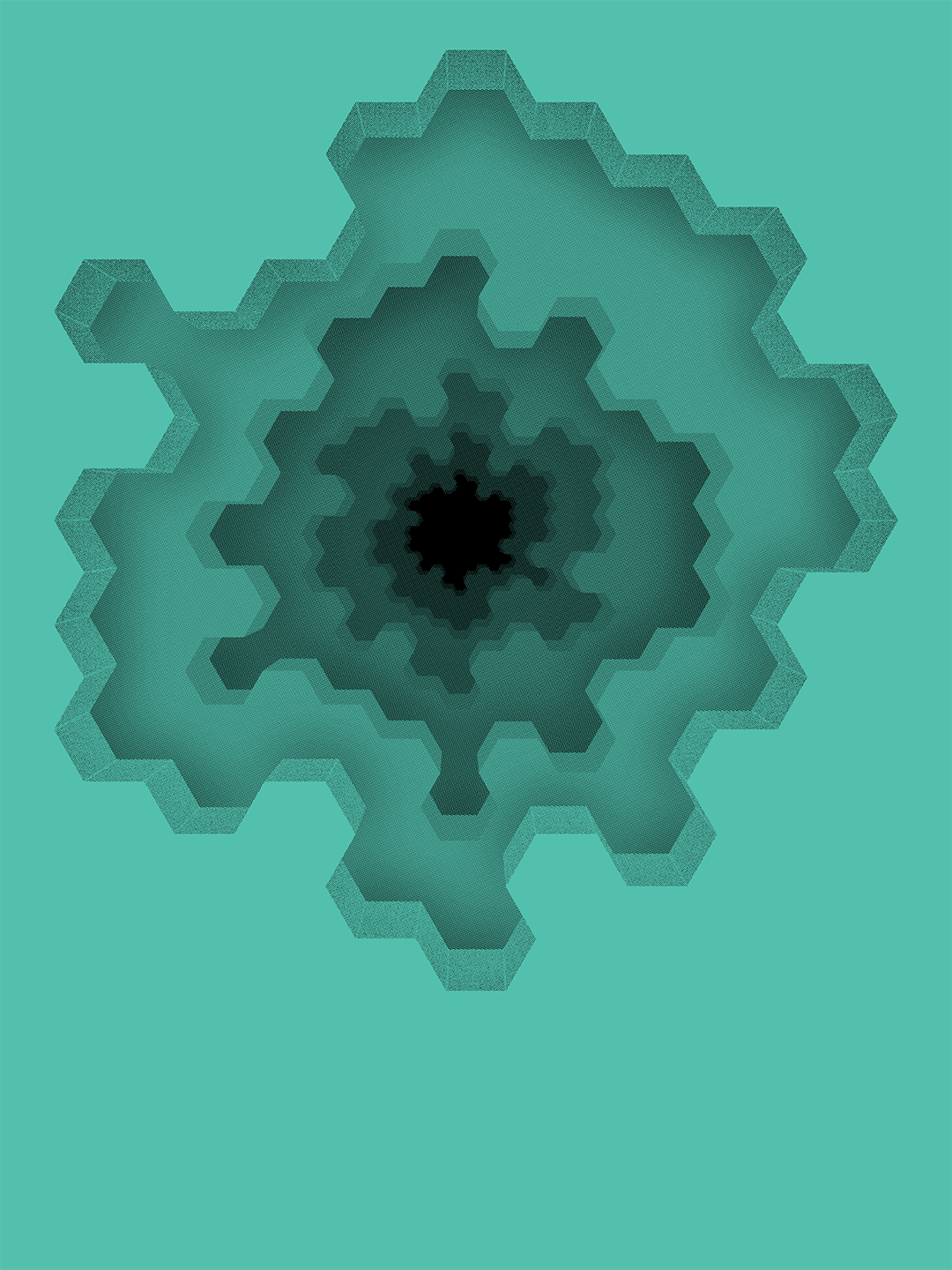 2/21
Another proof of concept. Was a bit rushed on the colors. There should be five layers in there. I was focusing on using less uniform shapes than my last post. I'm considering moving away from the uniformity of the hexagonal pieces. 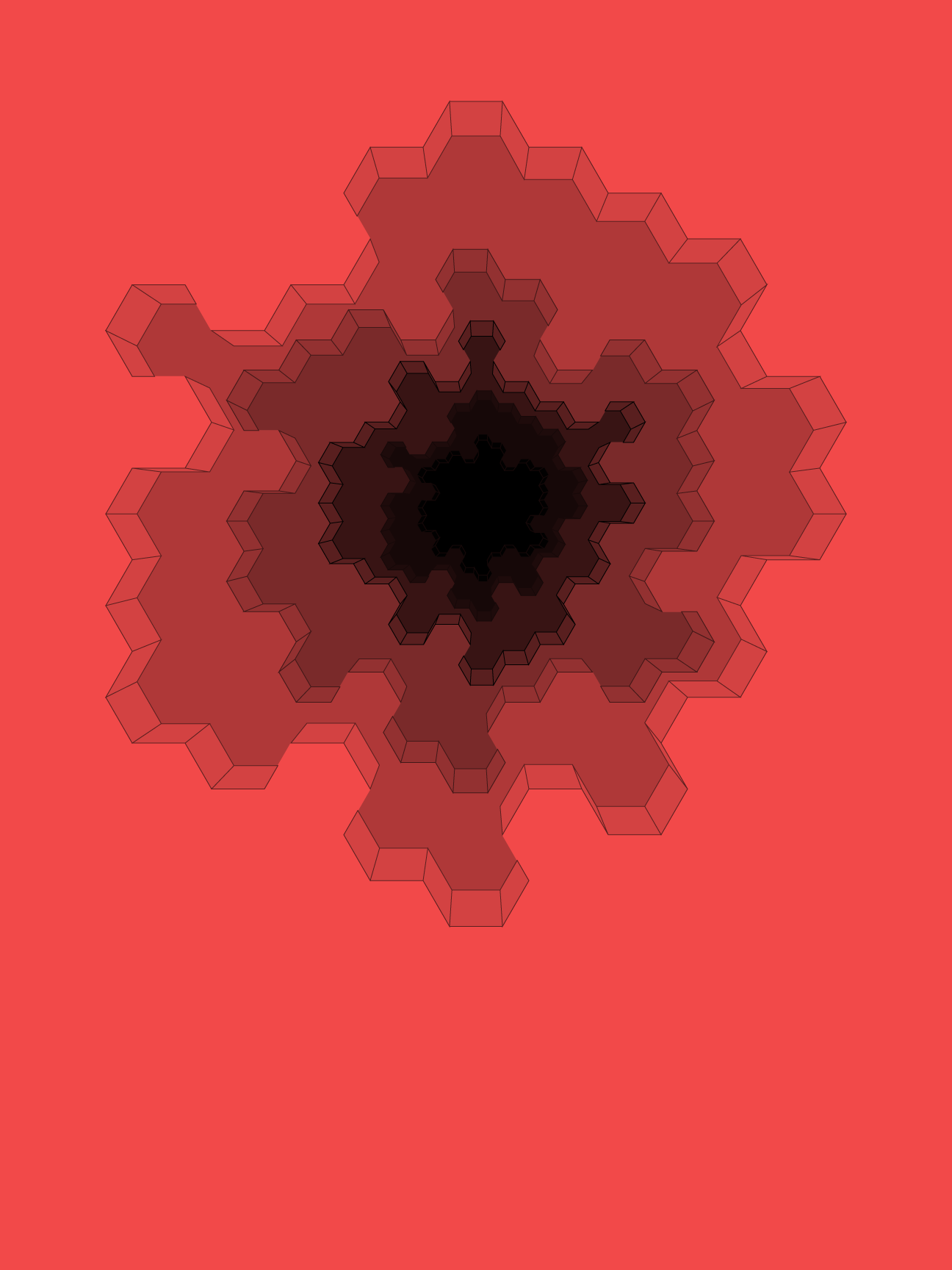 2/17
Did some tests on this concept. Decided to go with a hexagon instead of a cube or triangle. I think there is some potential here. Am also pleased that, for hexagons, this doesn't feel like a honeycomb. Lots of copy and paste in this test, the final will be less uniform.

My research revealed that Trevor Powers of Youth Lagoon has recently been inspired by the human psyche and the metaphysical universe. I'm continuing to research an appropriate object that could be found within or emerging from this hole. I'll also be researching typographic solutions. I'm sure I'll toy with placing that type in the center of the void as well. 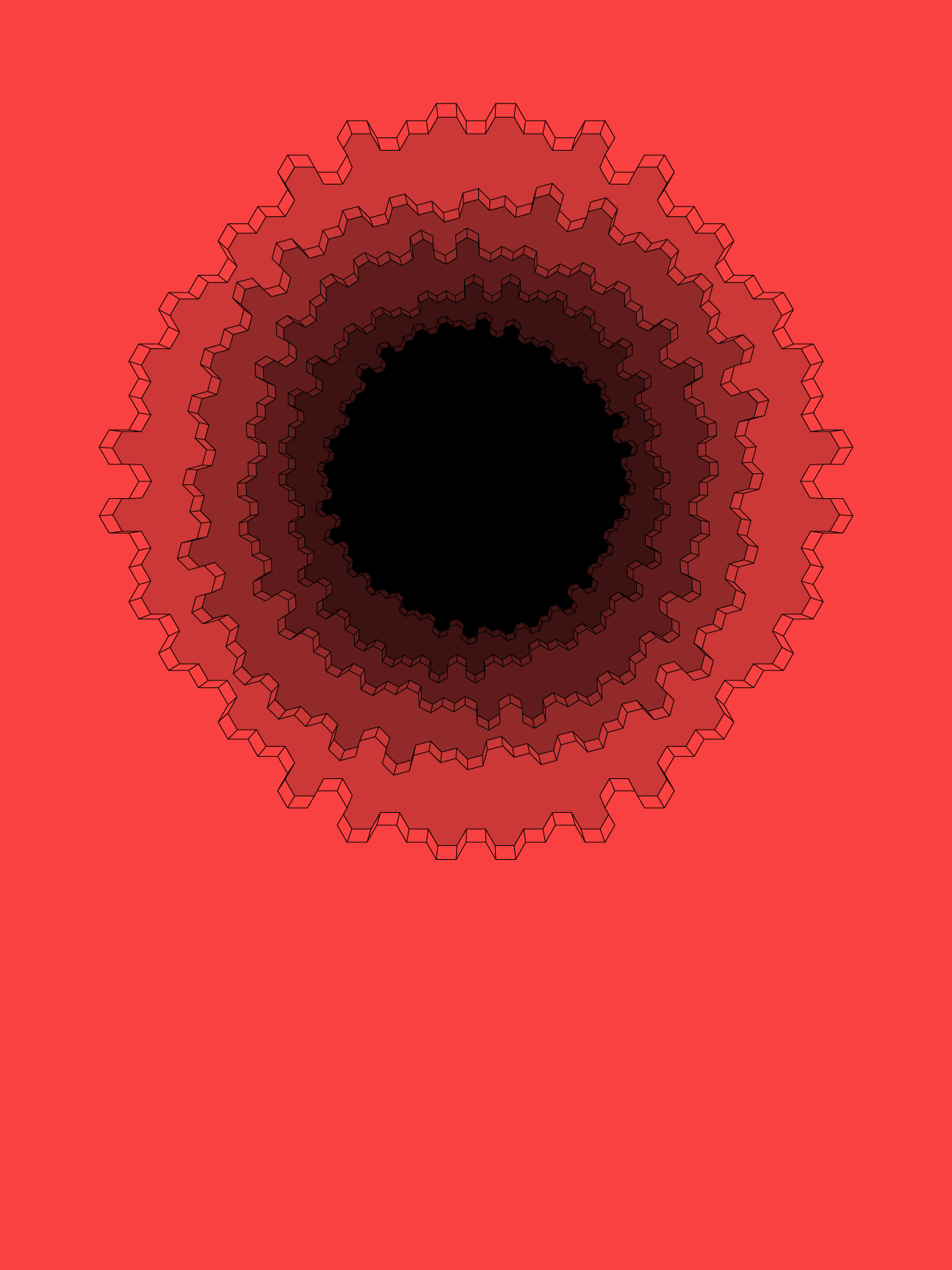 2/13
Powers has said his upcoming album explores the human psyche and the metaphysical universe. This has shifted my research.

My intent for each of these concepts would be to produce them as silkscreen prints.

Concept 1
My design work is often heavily geometric or rooted in some sort of mathematical system. This image is based on a grid of geometric shapes. In the sketch I've used cubes but mostly for timeliness. At this point I imagine I would use triangles, extruded for depth. Each layer would become progressively darker. The idea is that, when hanging on the wall, an illusion would exist that the viewer could see into the wall.

In the sketch I have the type at the bottom of the page, but it would probably be more powerful in the center of the image. Further, I'd like to explore the geometric shapes emerging from the image toward the viewer. 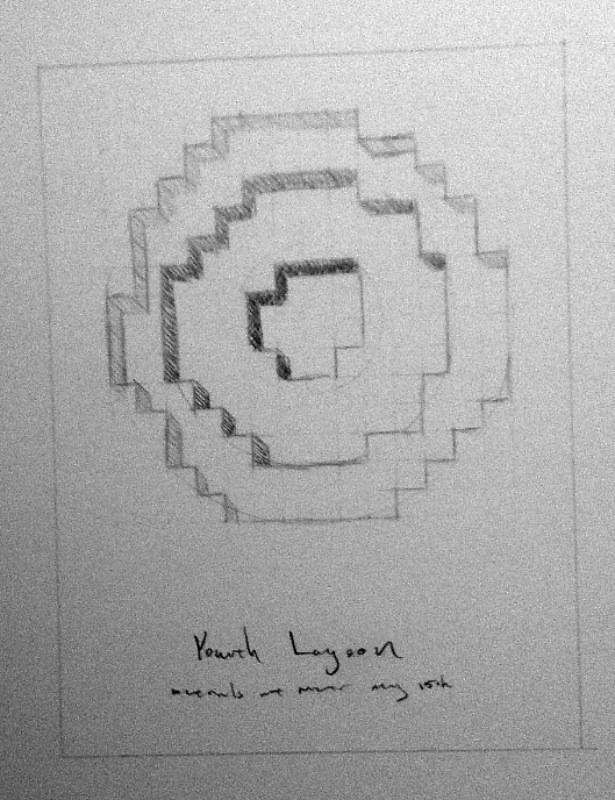 Concept 2
This is my most literal take on the name "Youth Lagoon". The image is of a young boy, in a school uniform, with a snake for a necktie. The shape of the shirt collar meeting the necktie constructs the snakes head. The image would be very flat and minimal like a Jason Munn print.

The boy is faceless, indicating themes of Youth Lagoon's lyrics.

The smaller rectangle indicates an alternate layout where the figure's head is not implied at all. Greater focus would be given to the sneak/necktie. The emblem or crest on the chest would hold the event information. 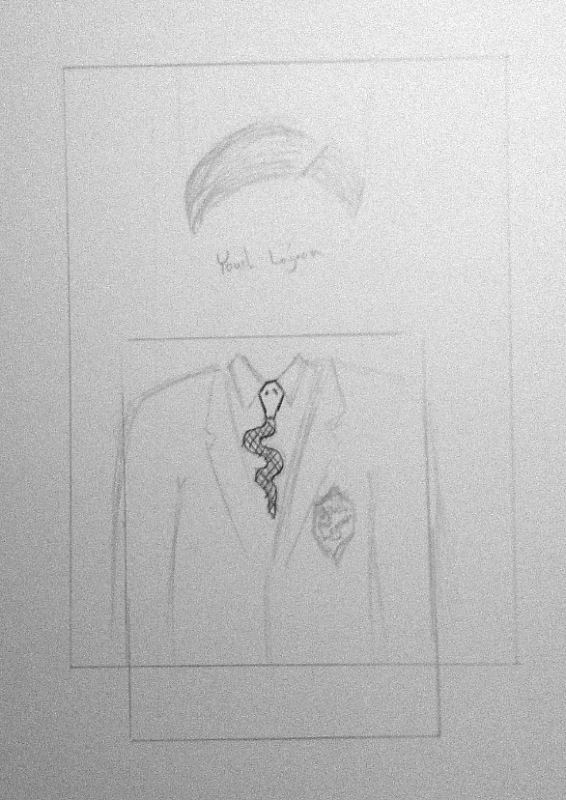 This would be a CMYK print. I've worked out a system for reproducing any color using overlaying diagonal lines and four-color process builds. This is similar to how halftone overlays in normal CMYK prints work. Although I'm anxious to try out this system, this is my least favorite of the three concepts.

A challenge of this concept is obtaining or producing an appropriate photograph. 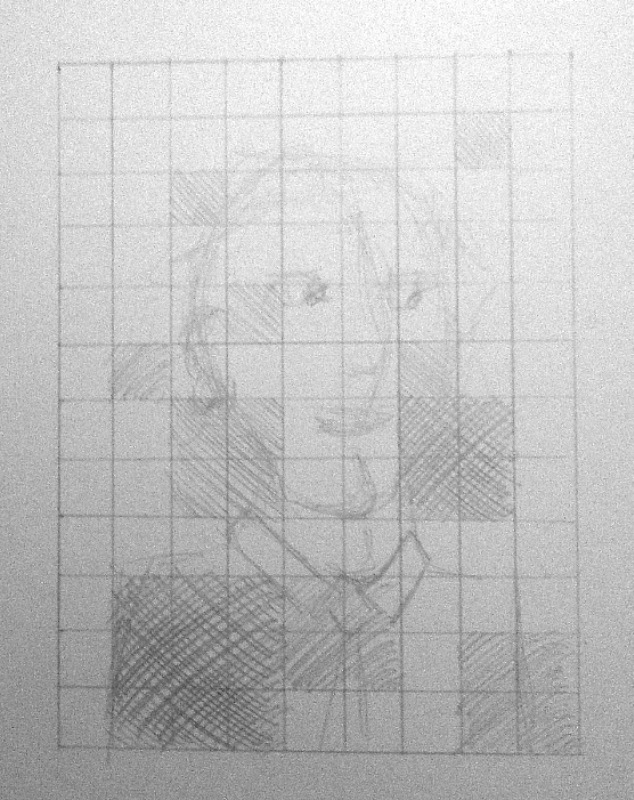 2/12
Youth Lagoon recently announced a show at Metro in Chicago. I'll be taking that on.

I read an interview once with Trevor Powers, the individual behind Youth Lagoon, where he said he started making music to help cope with feelings and ideas that he wasn't able to talk about. I plan to let that concept of timidity and shyness drive my concepts.