The stories of Yo La Tengo. "Wha thte heck is a yello tango?" Yo La tango is Spanish for "I have it". Wikipedia (unquestionably true) states;

The name came from a baseball anecdote. During the 1962 season, New York Mets center Fielder Richie Ashburn and Venezuelan shortstop Elio Chacon found themselves colliding in the outfield. When Ashburn went for a catch, he would scream, "I got it! I got it!" only to run into Chacón, who spoke only Spanish. Ashburn learned to yell, "¡Yo la tengo! ¡Yo la tengo!" instead. In a later game, Ashburn happily saw Chacón backing off. He relaxed, positioned himself to catch the ball, and was instead run over by left fielder Frank Thomas, who understood no Spanish and had missed a team meeting that proposed using the words "¡Yo la tengo!" as a way to avoid outfield collisions. After getting up, Thomas asked Ashburn, "What the heck is a Yellow Tango?"

A lot of he bands lyrics deal with aging, companionship, emotional bonds, compassion, and time. Doing a bit of research and listening to the album on repeat, the album has a sort of foggy, dreamy sound that is paired with guitar riffs that make you feel like you are weigtless. Mind mapping got me to pigeons. Pigeons are very intelegent. The male and the female raise the young together (usually 2). Also, unlike most birds baby pigeons stay in the nest for up to 2 months before leaving (that's why you never see a baby pigeon). Pigeons can also live to be 30+ years old. There are a million more conceptual ties to pigeons but, ill leave it at that. 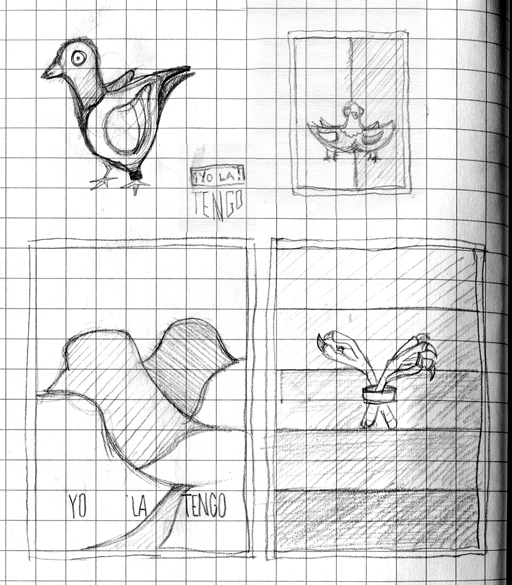 The upper left was a doodle while i was thinking that i chuckled about. The top right was a thought about a bond so tght that the pigeon is siamese. two bodies but all the same in the head. Plus i like the look of a pigeon straight on with their side mounted eyes. Also plays off the fact that pigeons are monocular and can't see depth (which is why they bob their heads).

Lower left is a thought about time and bond. It would be the overlapping of hills to make the outline of a (somehow distinguished) male and female. As a road indicates the passing of time and traveling foward.

Lower Right is based on the bond created by Marriage. It's not uncommon to see pigeons with "bird Bands" around their ankles so that they can be tracked. In this instance it takes on a new meaning of til death do us part.