It's been a while since I've done any drawing so I've really enjoyed this project!  This design was inspired by art nouveau flower and animal illustrations, though I've gone a bit more realistic and less stylized than they tend to be. I spend a lot of time in the woods in the spring and take many photos of everything I see, so I chose a few things that I had photographed in the spring in the past, morel mushroom, snail, and oxalis flower and leaves.

Since I work better sketching with pencil, I took a few more steps than were included in the video example. First, I made a light sketch using pencil and then traced my sketch onto vellum with ink. I then used my copier to print out the image onto heavy card stock, from there, I trimmed my image down to about 8"x9" and followed the video instructions for the half-drop cuts.  I didn't fill in the empty spaces, however. After making my tile, I taped it into the center of an 8.5"x11" piece of paper so I could make sure that the entire image would be visible on the copied sheets. After making copies, I trimmed the sheets back to 8"x9" and used spray adhesive to affix them to a large piece of foam board. I had a bit of trouble getting everything to line up perfectly, but I think it turned out OK. Next: need to add some color. 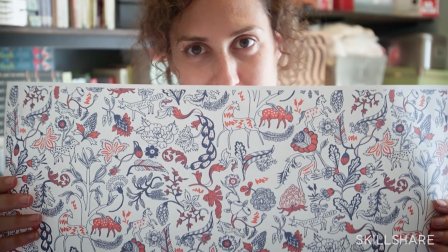