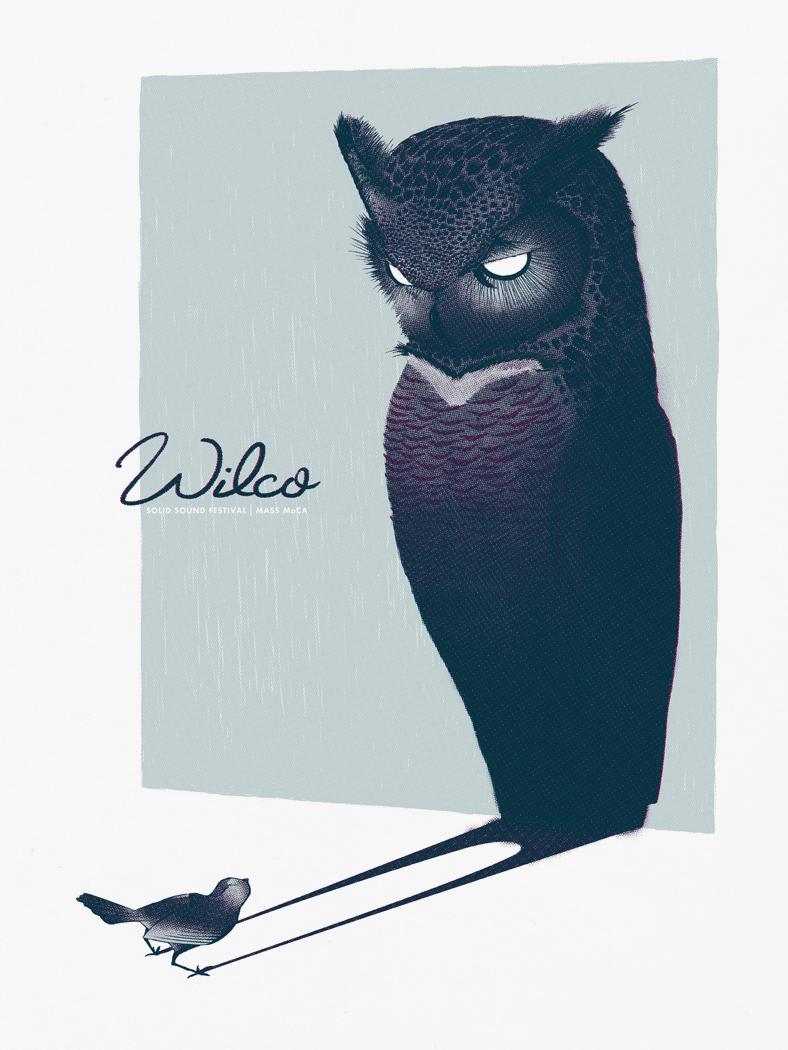 And here we are!  I had a lot of fun playing with different typefaces, and I settled on drawing their name in a script, then using a heavy type for the venue info to balance it.  Here are two other options for the placement/coloration: 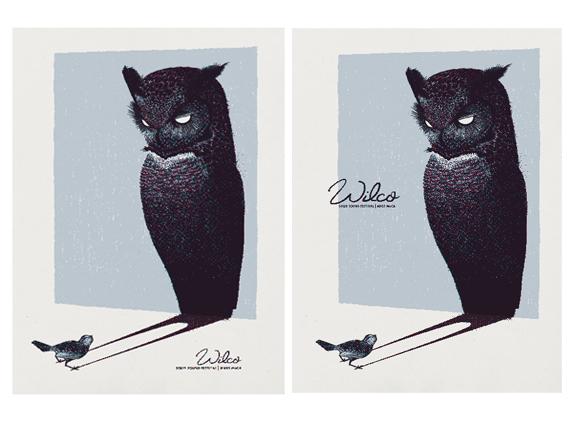 My personal favourite is using their name to break the plane as shown in the first option.  I think I'm done, unless you think something is missing.  I'm really excited because I think I achieved the simplicity/complexity balance I was going for.  Wasn't honestly sure how that was going to work out.

Here are some detail shots for you: 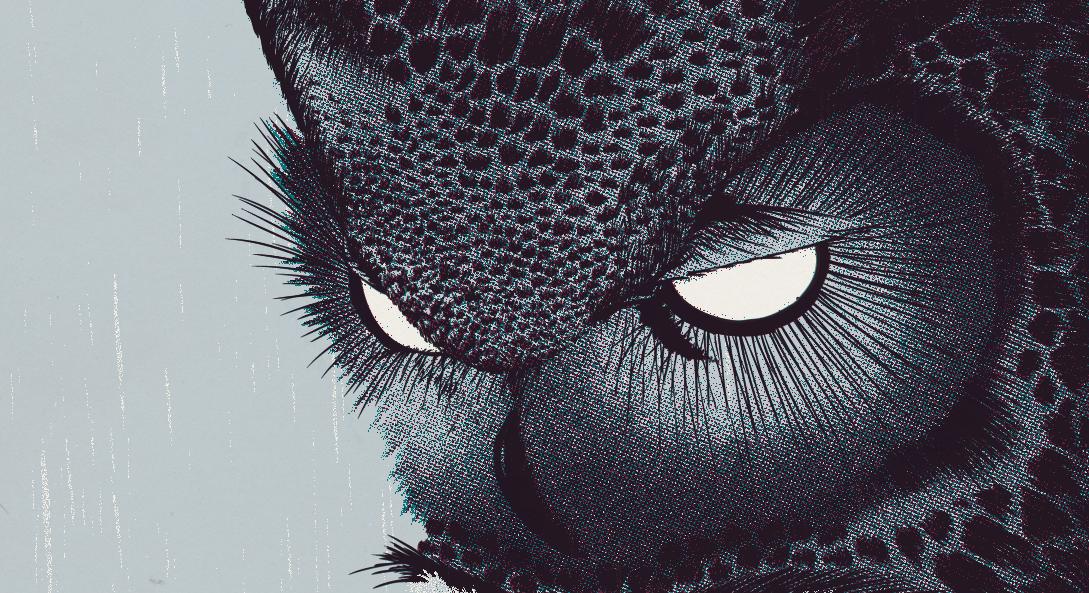 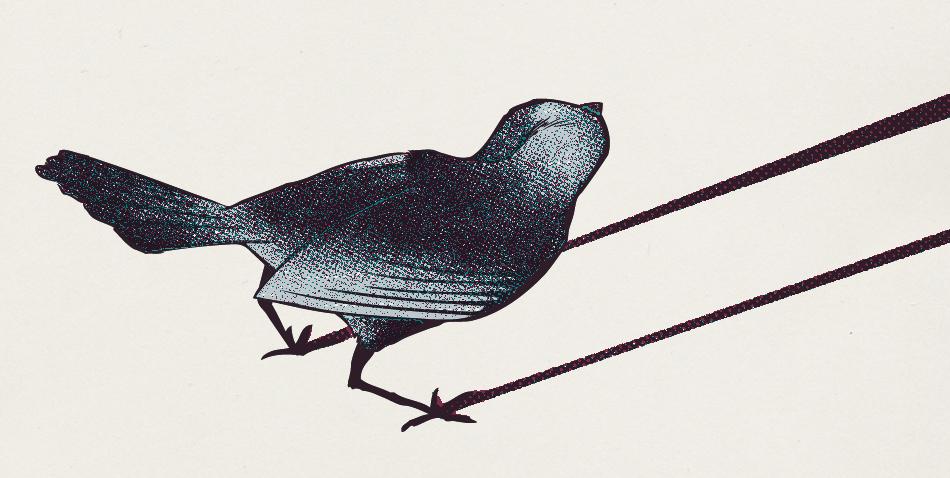 This has been an absolute blast. 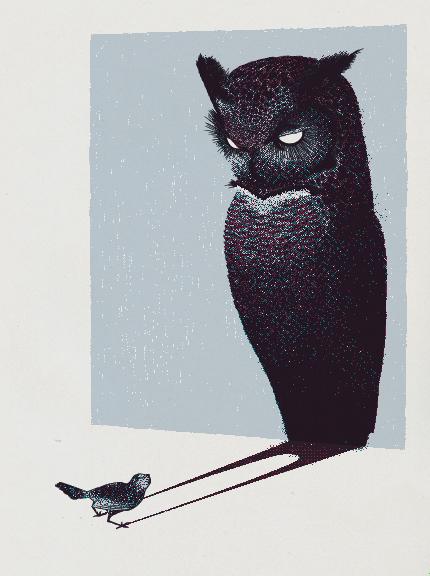 Took your advice, DKNG, and hand-drew the wall.  I definitely like the effect.  I like the cooler color in contrast to the warmth of the burgundy.  I also filled in the bird to match the owl a bit, both to give him weight and to give him and the owl some similiarity.  Is there anything I'm missing here?  I feel like the illustration part is essentially a wrap and that all that is needed is a simple type treatment--hand-drawn, of course.  I've thought about incorporating the type into the design itself--I even started to make it into more shadows--but the more I assess, I kind of want to keep it simple and separate.  Thoughts?  Thanks so much for all the kind words and helpful critiques.  This has been an awesome experience thus far.  I'm so bummed that work has kept me from every live session!  Thanks for making it available afterwards. 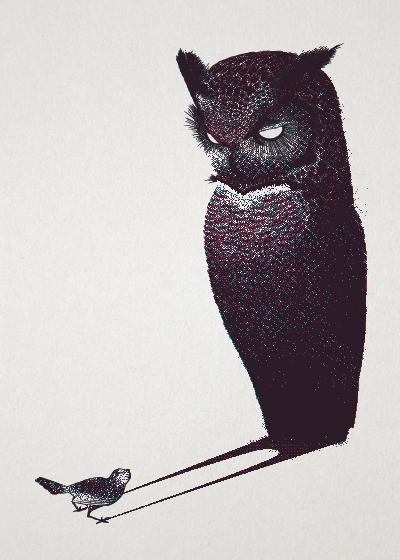 Alrighty, here's a look at the main aspects at 2 colors in.  I'm quite happy so far.  I feel like the emotion is translating well at this point.  The background (not pictured) really makes everything pop when it goes behind the owl, so now I'm just finalizing what exactly it will look like (pretty similar to the original blank parallelogram--I still want to embrace that simplicity to balance the details) and getting the right feel for the typeset.  After this it's just icing. 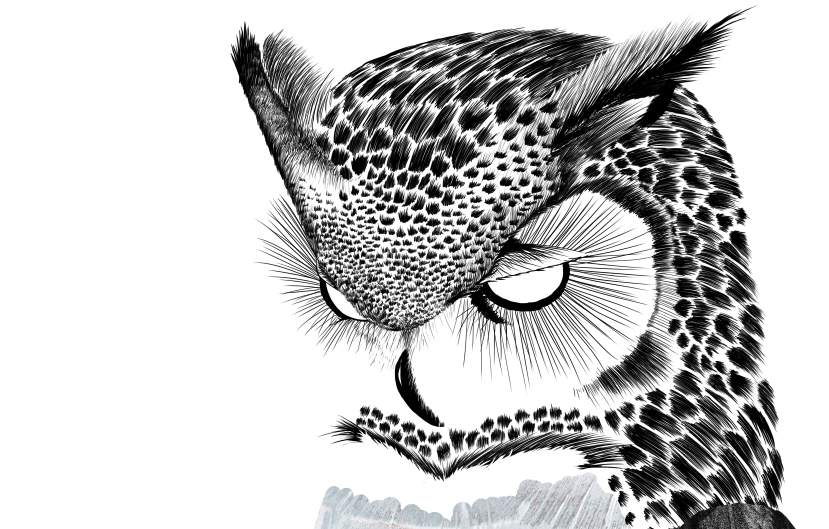 Well folks, here's the latest update.  The owl is really starting to take shape in a mode of finality, and I'm really happy with how he's developing.  The idea is for there to be less and less detail as the eye scans down his body to where his lower body will be simply shadow--as if the solid shadow is coming to life.  I started out with a solid outline, but as it has progressed, I've taken away every form element from his upper body and gone with only detail--where his lower body will be only form with hints of detail.  The colors laid under him will give all the form that is needed.  I'm enjoying working with contrast in so many ways in this piece--lights and darks as well as simple and intricate.  I'm working in black simply for the sake of seeing detail clearly.  The black shown here is actually two colours--a dark teal and most likely a fuschia-esque colour.

I do have concerning colours in terms of screenprinting:

In terms of transparency, to preview what overprinting will look like, what mode should I use?  I always assumed Multiply, but after the last DKNG video with the scene from inside the car on the desert road, I noticed that dark brown plus orange equalled light brown.  If it were mulitlply, it would simply make a darker colour.  Thanks for the input, as always. 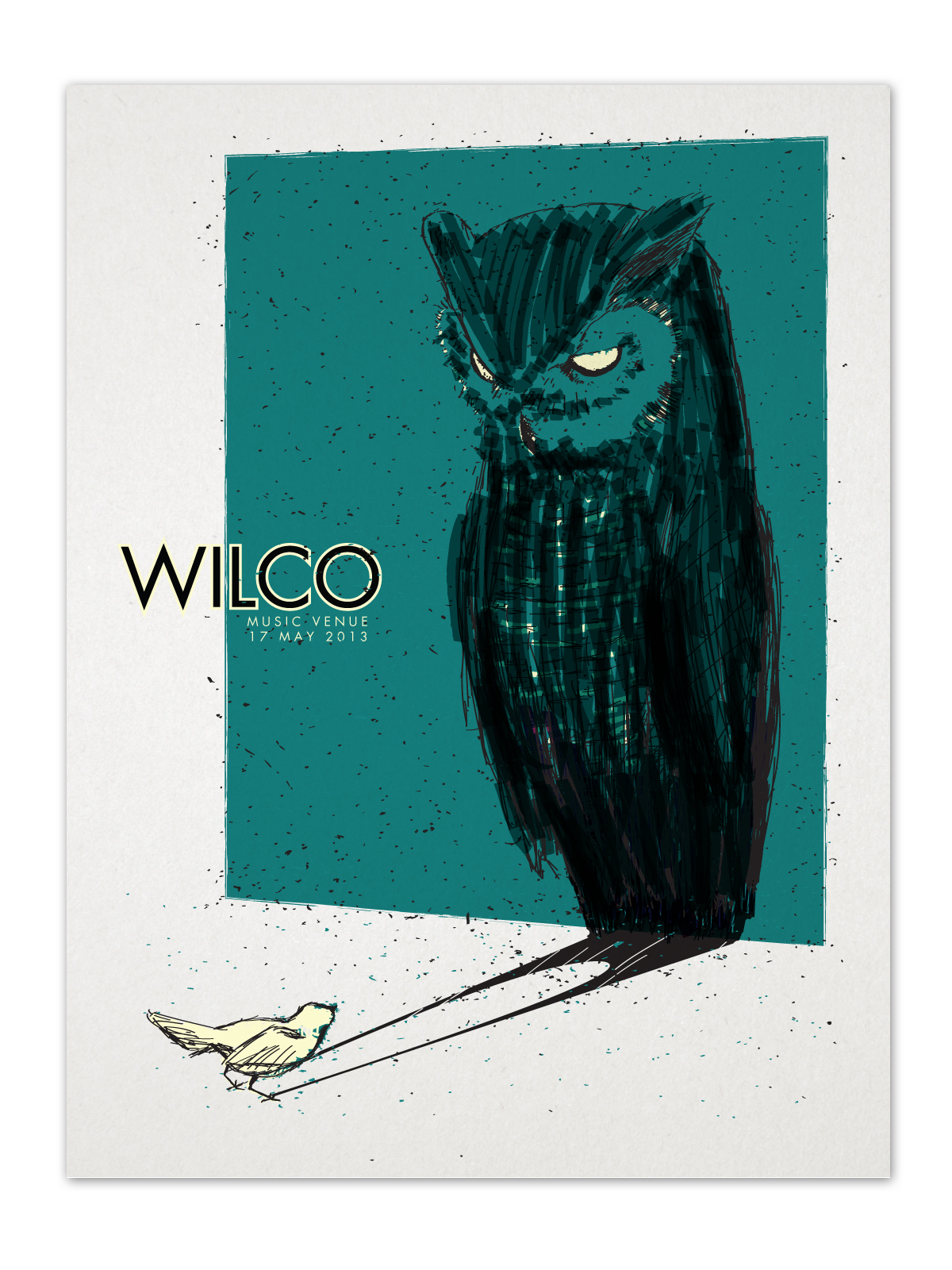 Well, I have been excited to see where the second sketch has taken my project.  What I thought would be a simple owl silhouette has ended up taking on much more personality.  I like the fact that the owl has become much more ominous.  I was thinking that sense it is the shadow of the Songbird, he is seeing himself in a way, and his imagination and fears are running rampant and giving more detail to his "shadow".

This process is very helpful, because I had an image in my head, but did not know it would flesh out this way.  I really like it and am excited to continue bringing it to life.  I want it to have solid detail, but without becoming overly intricate.  I feel that simplicity in all other aspects of the poster will help drive home the intensity of interaction and balance between the two subjects.  Thanks for the input! 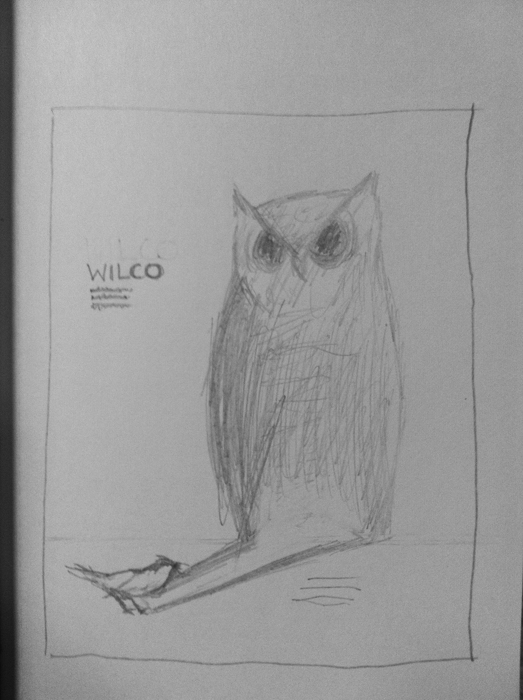 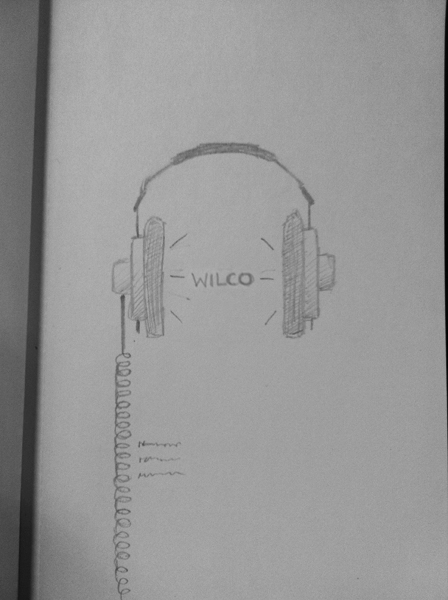 I have had the huge honor of working with Wilco once in the past, and I'd like to follow that up with something they'll really love.  They are pretty eclectic on what they like, but I have a few ideas I'd like to pursue.  I thought I'd do a quick sketch of my two favourites and see what felt more inspiring.  For the purposes of the class, I think I would like to go with the design for the SongBird of Prey shadow.  I've been wanting to develop this for a while, and I'm pretty excited to see how it fleshes out.  Definitely a illustration-driven poster, with simple typography where placement is key.

I don't want it to be too ominous--somewhere between the illustration of Kevin Tong and the flavor of Invisible Creature.  I'm looking forward to learning how to implement some good texture with screen printing in mind.  Thanks for any input!