Why is Blackface Even an Option?

Iman. Naomi. Tyra. Joan. Jourdan. Sessilee. All are top black models from the past and present, but they aren't the only black models working today. There are more, much more. Even though there are plenty of  black models and other models of color from other cultures to choose from, the fashion industry still insists on using white models painted in deep tones of darkness and tribal style clothes amidst African backdrops to display "ethinic" style clothing. Why, after the uproar that happens after every other blackface fashion, is this still a thing? Why does this keep happening, and when will it stop? 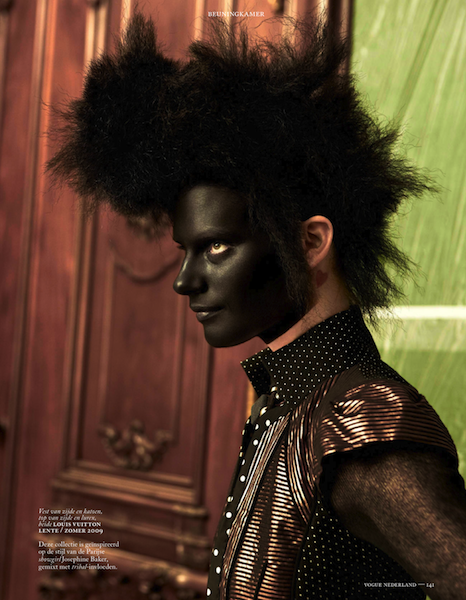 Within the first five months of 2013, there have been two instances of blackface in fashion editorials. The latest comes from Vogue Netherlands. THe editorial was supposed to be a retrospective of fashion designer Marc Jacob's work for the French fashion house Louis Vuitton. Because Jacobs said that some of his looks were inspired by Grace Jones and Josephine Baker, I suppose they thought it would be great to paint the models face jet black and use this captions along with the pictures, " this collection is inspired by the style of the Parisian showgirl Josephine Baker, mixed with tribal influences." Where is Josephine Baker and where are the tribal influences? Would that be the nappy black hair and the jet black face paint... 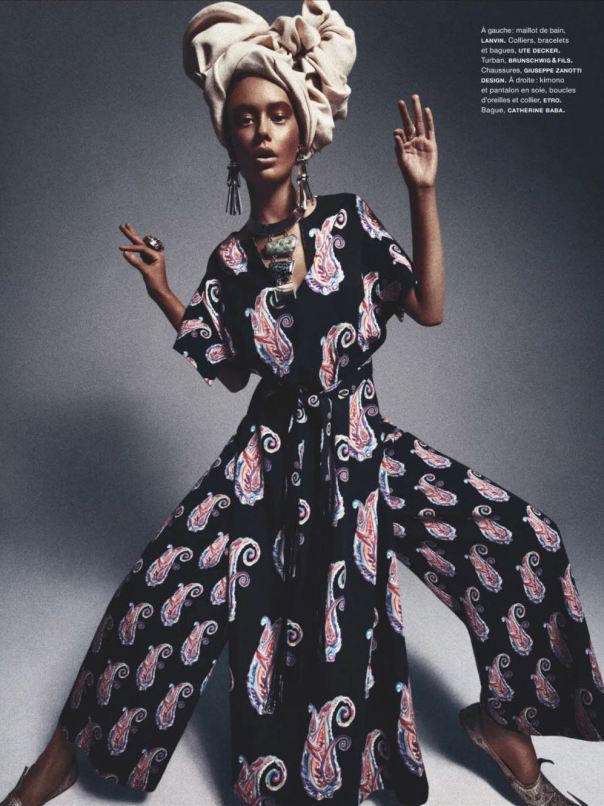 Just one month earlier the March 2013 "African Queen" editorial in Numero magazine caused another uprorar because a sixteen year old model, who likely had no say in the matter, was again painted with a tan so deep it would probably make Tanning Mom jealous. In this instance, to save face, the photographer came out with an apology.

I would like to apologize for any misunderstanding around my recent photos for Numero France. It was never my intention (nor Numero’s) to portray a black woman in this story. Our idea and concept for this fashion shoot was based on 60′s characters of Talitha Getty, Verushka, and Marissa Berenson with middle eastern and Moroccan fashion inspiration. We at no point attempted to portray an African women by painting her skin black. We wanted a tanned and golden skin to be showcased as part of the beauty aesthetic of this shoot.

It saddens me that people would interpret this as a mockery of race. I believe that the very unfortunate title “African Queen” (which I was not aware of prior to publication) did a lot to further people’s misconceptions about these images. It was certainly never my intention to mock or offend anyone and I wholeheartedly apologize to anyone who was offended.

While the apology was better than most given for the unfortunately common use of blackface in the industry, it still confounds me as to why they would think that it was ok to make her that dark. A simple Mystic Tan wouldn't do? Did they really not think that putting a darker skinned women, who is known to be white, in African inspired clothes would rile some people up and ruffle some feather? Did none of these editors, stylists, makeup artists, and photographers learn from the anger stemming from previous instances of blackface? 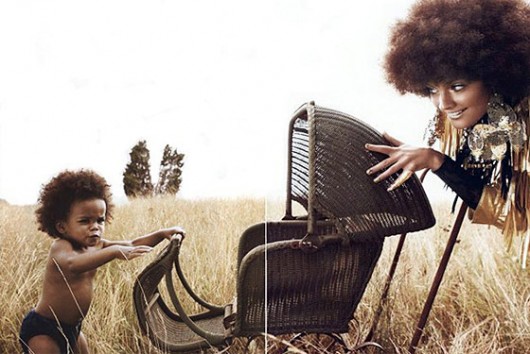 When top model Constance Joblanski was photographed for Numero, several years back with a black baby and several blond and dark-haired wigs, the uproar was extremely loud and very vocal especially since the stylist was none other than Patti WIlson. WIlson, herself an African American, explained that the model had a tan and it rained the day of the shoot leaving them little to no choice but to use whatever wigs were left in the hairstylist's bag. But then why was a black baby used as a prop. WIlson went on to say that, "I wanted to kind of comment on what is going on now with (white celebrities) getting all of these black children, Madonna, Angelina Jolie and now Sandra Bullock."

I'm not buying that excuse. I'm really not buying many of the excuses these magazines are putting out, especially now that this has happened over and over again. Magazines know they can have their pick of any model of color, yet they still choose not to use them. Plus a magazine like Numero should have known better. They had already been through this before.

I can count on my hand the number of blackface fashion editorials that have come out in the past four years, and each and every time there has been some type of discussion on race, racism, and how this is wronger than wrong. Racism is a huge problem in the fashion industry, but it has now because  so common place that people sweep it under the rug and actr like it is normal. In an industry where black babies can become props and face paint can be a substitute for an actual working model of color, I have no choice but to believe now that not only do these magazines know better, but they are doing this on purpose to build press and get a rise out of people.