I had a hard time coming up with what to say as I don't write or journal much, but I do make visuals to work stuff out. After attending a couple local Moth story slams and working on elle luna's #The100DayProject I decided to create a sentence about my own history and present state of mind.

I started by researching the type of cancer I had and the statistics from the year I had it (I knew the name of it, the year I was diagnosed, and general percentages, but wanted exact stats).

I used Pinterest to reseach some cancer cell imagery...

Next was picking out fonts to match the style and feeling of the message and content... I ended up picking the delicate, personal, Bickham Script because I felt a lot of the scientific imagery had these qualities. I then chose BigEd-Sr, a sort of brash David Carson font (a designer I've always admired, who liked to break all of the rules of traditional graphic design) to counterbalance the Bickham.... annnnd then I rewatched Debbie's lesson more than once.

I then looked at my #The100DayProject work I've been creating, which has become sort of a visual journal, and found the ones that represented the texts the best.

After a lot of back and forth and trying different picture and text layout combinations, I ended up with this 5 panel piece. 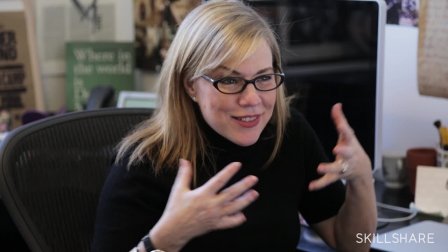 The Art of the Story: Creating Visual Narratives
Debbie Millman