I was aiming for a modern take on old style Scandinavian folk art combined with some gold metal effects inspired by Cat Coquilette's class. But instead of overlaying a metal texture file, I created the golden effect with a custom gradient.

The invitation with monogram

RSVP card, bringing in the golden rings together with elements of the watercolour painting

The place card is a variation of the same idea.

The original artwork. I knew I wanted a clean circle  in the middle so I used a bowl to draw the shape. Later I decided to put the golden circle over it digitally but this way I also have the option to use the painting without metal effects. 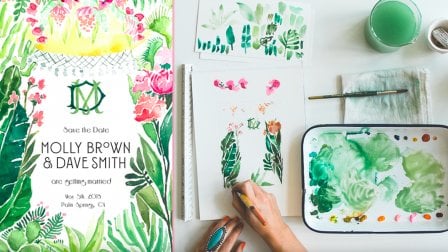