For this class I had a general idea going into it for what kind of comic I wanted to make, but I still want to make sure I properly do all the assignments.

Next up was the bodies I tried to play more with weight distribution and height rather than doing anything super exaggerated I think my favorites in this set were the taller man and the larger woman to his right.

At this point I'm going to get into my characters a bit more, though the assignment was for a girl and boy character my protagonist is meant to be a very boyish looking girl so it feels a bit cheat-y to do just one other character next to her so I've decided to do three in total. Initially the middle girl was just meant to be a normal elf but as I was making her I wanted to taper her legs more to make a cuter silhouette and ended up deciding to make her more faun like and gave her hooves and some nub horns.

Next up was the clothes/hair I wanted all of them to have the same 'uniform' with different variations based on their personalities. Though the main character of the story is on the left for plot reasons I wanted the other two characters to feel like a MC and LI design wise while still not overshadowing the actual main character too much.

I took those ideas into the color schemes for the three as well. Having Prim and Zion get brightly colored hair and eyes that I decided to have mirror each other while for Ashe I kept her palette neutral and more balanced. In addition I simplified Prim's ringlets into something that would be easier to draw repeatedly.

In the end I still may tinker with some parts of their design more, especially Prim's hooves, but I'm still fairly happy with the end result. Hopefully I'll even end up making their comic down the road! 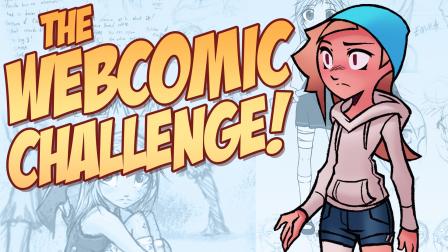 The Webcomics Challenge: How to Create Stylized Characters
Kienan Lafferty