Exercise One - The Door

Making the stones was very meditative. The repetition was calming and I spent too much time on this, but after a rough week, this was lovely to get started painting again! First time painter who mostly practices on flowers and leaves, this was my first ever go at something more "structured".

I learned that the cheap brushes really do not hold as much water. I was pleasantly surprised with what I could do with the Angle Shader brush; I will definitely be playing with that one more. My faves are still the cotman series and the caran d'ache. I expected more from the sable brushes; perhaps a different brand would be better? I want to use my fan brush more, but apart from trees, I still don't really know what to do with it.

Used Aquafine 6, angle shader 1/4", and Aquafine Sable 6. Much happier with what I could do with the sable in this exercise. I had great difficulty in keeping the "bricks" the same size and having a brick pattern. I had better luck with the angle shader than the round brushes. Do I have too much water in the paint? I am using Windsor & Newton cotman half pan watercolour.

I struggled with the hovering technique, and I think you can tell when I am using it (more wiggly lines). I used the flip back technique mentioned by @JenDixon in the comments and discussion board. There was less pooling at the end, but sometimes I just brought the pool to the center lol.

I found another flat brush in my bunch that I didn't know I had! :) Not that I have so many brushes; more like I go for the same brush over and over again. Nice to discover brushes in my own pile. For the exercise, I struggled yet again with the pools of water, then I turned the paper. Shocker. Meaning, instead of painting the short long pattern from top to bottom, by turning the paper, I ended up going from left to right. That made an amazing difference in the quality of my strokes and the pools didn't happen as much. Turning the paper didn't affect the quality of my angles strokes... actually, they are less straight now that I look again.

I was using the back of a water color paper for this exercise (so Exercise 4 is on the other side of this paper). I have never done that before, and I noticed that the quality of paper on this side is spotty. I would notice that the paint wouldn't soak in some parts or the end result would look like there was some water dropped in. Not sure if that makes sense, but in the section where I went left to right, you can see the change in color. For the end, I played with my angle shader brush to make the very thin angled lines.

Thought I would dread the letters, but that wasn't so bad.

Some brushes didn't hold as much water as hoped, so the snake would disappear sometimes. 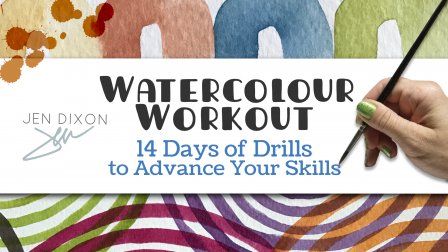